I stopped for a cup of coffee yesterday. The coffee shop is in one of those small strip malls next to one that is being built, right next to where they are clearing land to build a new strip mall. You know the place. It is happening in a field near you. Is there a strip mall weed out there spewing seeds? Not to drift too far from the point of this story but... how can you build a strip mall when the one next to it has vacancies? How many empty store fronts do we need? Anyway back to the story.
As I walked out the door coffee in hand, a Killdeer started acting out with it’s little “cripple” act on the side walk. My camera was in the trunk for just such an emergency. This vacant lot is adjacent to the shiny new strip mall, it is a collection of rock, broken concrete, rotting pallets and an assorted weeds, perfect for Killdeer nesting. I took up a position where I could sit and watch the two acre wasteland and wait. 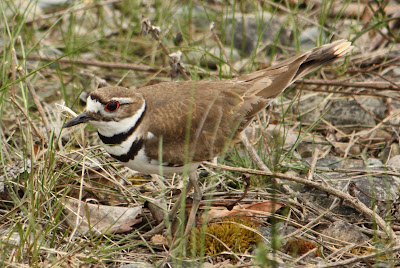 Adult Killdeer
Killdeer lay their eggs in a small depression on bare ground. Killdeers and their eggs are a wonder in camouflage. A normal clutch of eggs is four which are covered with a combination of random spots that allow them to blend into the rocky surfaces the Killdeer prefer for nesting. The eggs hatch within minutes of each other and just moments later the young get up and run. For the rest of their lives they are on the move. Walking out into the rubble field would be like walking into a mine field. The risk of stepping on the eggs while looking for them is too great.
With camera and coffee in hand I watched the field. The noisy Killdeer had settled down and flown out to the middle of the field when a few moments later I saw the mate walking in the distance. The two birds slowly moved toward each other. It being mid May I did not know if the eggs would have hatched yet due to the cool weather we had been having so far this spring. The answer appeared as a ghostly image in the rubble. 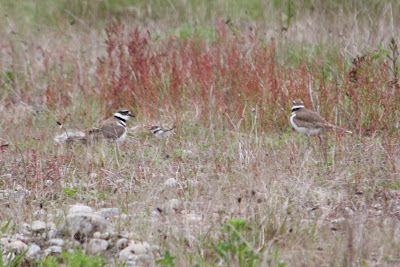 Two adult Killdeer with one of their four young.

Four newly hatched Killdeer roughly the size of ping pong balls were speeding along the rough field following he distant adult. I finished up my coffee and plotted my approach for the following photographs. It is extremely important to not endanger any animal in the wild while trying to photograph them. No animals life is worth a photograph. I checked the sky and near by trees for crows, jays and hawks. In the past I have watched crows watch adult Killdeer for days trying to locate their nest. Crows have excellent memory and spacial concept but in the end eye sight is their best tool. I have found nests by triangulation, it is not always effective. Seeing the fluff balls from a distance took all the work out of it.
I approached in a wide arc taking pictures as quickly as possible never walking straight at them. The first adult flew in to intercept me and immediately went into the broken wing act. The more I ignored him the more intense the act. 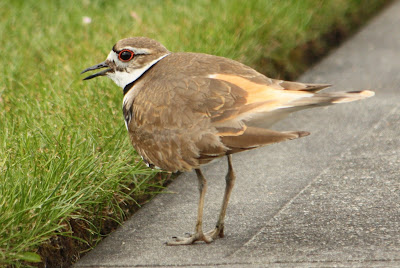 It starts with a "chattering" noise to draw your attention away from the nest or young. Look at me...look at me! 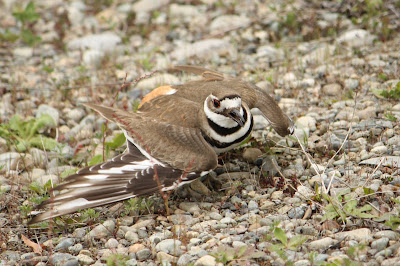 As you turn your attention to the adult the broken wing act starts. "Don't I look like an easy meal..please don't eat me! 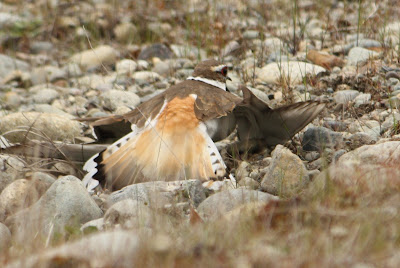 All the time you are being distracted from the purpose of the act and are being led further away from the nest or young.
As I closed in on the fuzz balls they froze and became invisible. Each time I blinked I had to refocus to find them again. I took these photos and moved out of the area in less than a minute. As I cleared the rubble field I again checked for predatory birds to make sure I had not compromised the young birds. 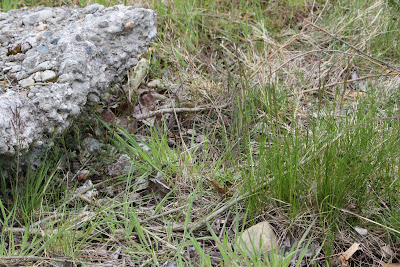 In the center of this photo there is one newly hatched Killdeer. If you can see it, it is probable because I told you it was there. If you can not see it it's because you are not supposed too. 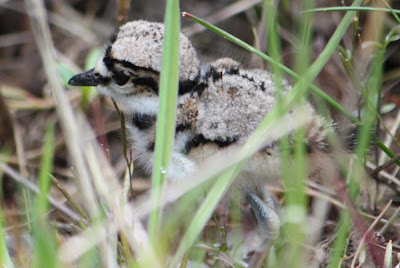 This frozen posture is instinctive and very convincing. Most predators hunt by keying in on movement. Camouflage and deception are the only defense these small animals have. 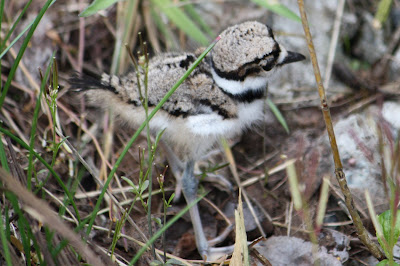 A true marvel of survival no bigger than a ping pong ball. Blink and you will never know you missed it.
So if you have the chance to see a Killdeer acting as if it is injured and you follow it to see if you can help. Don’t be surprised when it jumps up and flies off laughing at you because it just out smarted you in to leaving an area where it’s eggs or young were. Somehow in some strange way I find it comforting to know we can be out smarted by a “simple animal”.

Go get a cup of coffee and pay attention to the margins of where we live. There is more out there then meets the eye.

Be good!
Posted by birdmandea at 7:35 AM

Good grief Dea! The article about the Killdeer is fascinating! Great pics, great info...you really must write a book...including the humor of strip malls and humans in general.
Leave it to you to see all of that in a vacant lot!!
Why do you think they are called killdeer?
Thanks for sharing!