Millions of years ago the Earth's land mass were arranged differently.  A group of birds formed in to what would become known as the duck species of today.  In that nebulous bird soup a smaller group forged it's own identity, we know them today as Wigeons.
In the time since then the Earth's slow but sure tectonic plate action separated the initial core group into isolated groups. Today two species of Wigeon are found in the Northern hemisphere divided between the Eurasia and North America land masses. This is just a personal observation but it took a true lack of imagination with a over ridding zeal for accuracy to name them the Eurasian Wigeon and American Wigeon respectively. 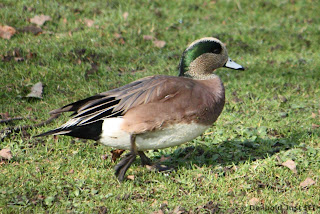 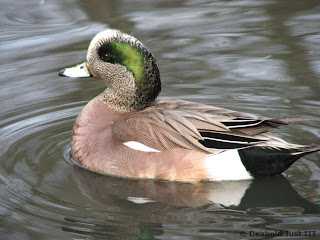 Another fine example of an American Wigeon 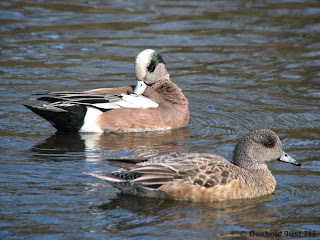 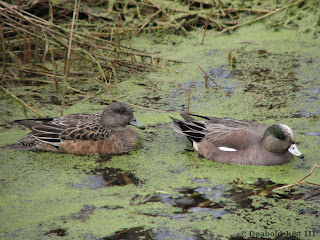 American Wigeon Drake and Hen
The polar ice cap during the past ice ages as well as the Pacific and Atlantic Oceans formed the large physical barriers the allowed all the two species to evolve into what we see today. Remember the females chose the males that impress them the best, the tastes in the old world went to the red and the new world went to the green.
Two years ago while walking in Titlow Park in Tacoma, Washington I came across a Male Eurasian Wigeon in a flock of American Wigeons. He stood out with his beautiful red head and silvery body feathers. At the time I took some photos and did not think about it much. I had seen just three Male Eurasian Wigeons before in the Puget Sound area. I was just elated to have been able to photograph one.  They are not very common and the numbers vary each year. 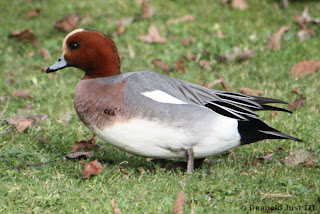 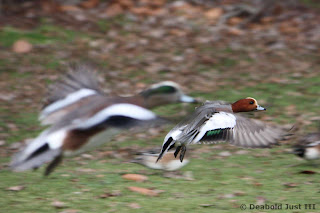 Here both the American and Eurasian Wigeon on the wing. Notice a strong metallic green on the wing of the Eurasian Drake
A few days ago I was near Titlow Park again and the sun broke out from behind the thick cloud cover. I took a quick left and headed to Titlow to see if there was anything new going on there. I was kinda surprised to find a flock of American Wigeons exactly where I had seen them two years ago. Even though I was surprised to find the flock I was not too surprised to find the Male Eurasian Wigeon still with the flock.
In the spring of each year millions of both species migrate North and mingle in Alaska.  When the time comes to head south there is some confusion and inevitably birds from both species get caught up with the wrong group and end up migrating South along the respectively wrong side of the Pacific Ocean.  This also happens to the birds that live in the Atlantic Ocean Basin.  While the Males of each species are easy to tell apart the female are all but impossible. These birds that have gone the wrong way have no choice but to stay with the birds that look similar to the ones they are used to. When they migrate North again the following year they may or may not find their own kind.
Some of these "lost" birds settle in with their new flocks and take mates. The calls and breeding behaviors do differ but not so greatly that the birds to not find each other attractive. Being distinct species their mixed offspring are hybrids and take on the characteristics of both. Since there is variation on how the genes split the outward expression of the genes creates a variety of beautiful and unique birds. As to if these offspring can successfully breed themselves, I do not know, I would assume that they could due to the species not differing greatly.
During my visit I thought I have found a second Male Eurasian Wigeon. As these two male Wigeons maneuvered closer to each other I notice on of the red headed Drakes differed from the other. After a few minutes I realized the second Drake I had found was one of these Hybrids. 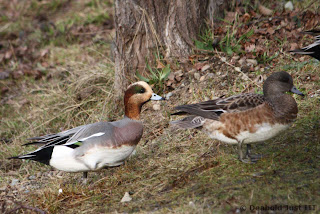 American X Eurasian Wigeon Drake on the left with an American Wigeon Hen.  It is easy to see the characteristics of both of the species in the Male. He clearly has Eurasian body feathers and a head that is red but patterned like the American with green highlights. 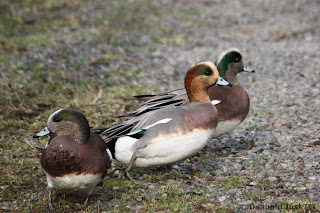 Our hybrid in the center flanked by two American Wigeon Drakes 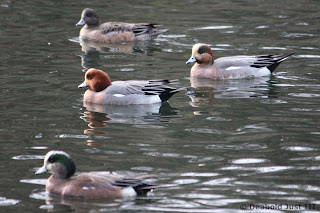 This photograph sums up my whole article in it's self. The duck in the foreground is an American Wigeon Drake, the second is an Eurasian Wigeon Drake, the third is an American X Eurasian Wigeon Drake and an American Wigeon Hen in the back ground.
Since it has been two years since my first sighting of the Eurasian Wigeon Drake in this flock I do not think it is too much of a leap to conclude that the hybrid duck may be his offspring.  OR...There may be a pure breed Female Eurasian Wigeon in the flock that mated with an American Wigeon.
Either way, I am sure that some where else in this flock there might be one or more female hybrids also. Due to the gray and red color morphs common to the females as well as the similarities of the females in both species normally, I doubt I would be able to find one that I could clearly identify, photograph and share with you. They are active birds and while I can get close enough for decent pictures, none of them would cooperate long enough to take family portraits.
As I have pointed out before,  I am an amateur naturalist who makes causal observations on what I see in my limited world.
I could be wrong. I could be right. DNA testing may provide the final answer.  I am sure none of the ducks are going to fess up to it. But then again none of them are going on the Maury Povich Show to figure out who is the babies daddy. They just make pretty babies.
Posted by birdmandea at 7:57 PM

wonderful article and photos...thank you for sharing both.
Grammyscraps...never can get my silly google account to work!!

Thanks so much for your informative post! The photo of all 4 together is wonderful! We have flocks of hundreds here, and I've wondered about a few of them. Your post answered my questions!