Hoodies in the NWR

Last week I trekked out to the local wildlife refuge to follow a report of Great Horned Owl owlets that were about to leave their nest.  I went out with sketchy directions and did not locate them.
Three days later when I went back out they had fledged and left the nest just hours before I got there.

During my first visit I spooked a pair of Hooded Mergansers in a tide flooded back water along the river. Hoodies are small drab fish eating ducks with long, narrow serrated bills. They nest in tree cavities and normally keep their distance from people as all wild ducks do. 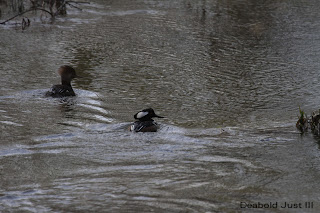 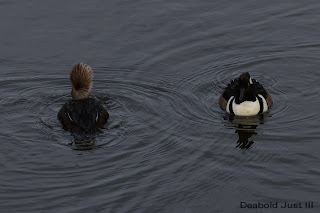 Yesterday I happened to find my way back to the refuge. The weather was about to turn from bad to really bad but there were scattered sun breaks that made it worth taking a chance on finding the owlets.  I headed out the trail when right there were the two little Hoodies I had seen last week. Completely unconcerned with myself and the camera. 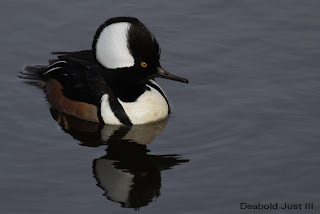 A stiff breeze from the approaching storm front made is difficult for these little duck to venture out to deeper water to feed. 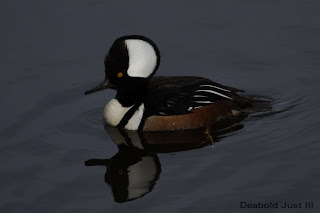 Pockets of calm water at the edge of the cattails made cozy little refuges in which they could preen and feed. 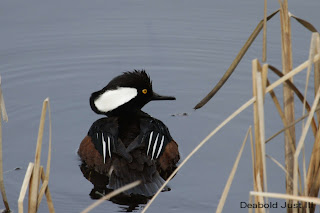 As the drake preened  the hen bathed and chased unseen bits of food among the plants. 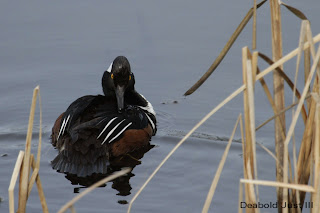 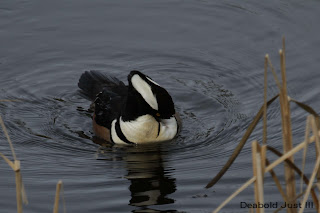 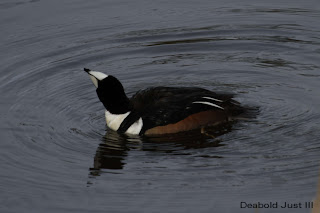 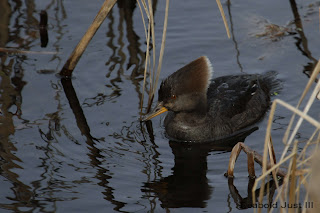 Drab and nondescript, this gorgeous little girl shines when she comes out into the light. 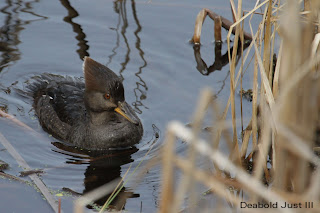 Even with a photo in front of me how do I describe this to someone? She looks comical and sculpted. 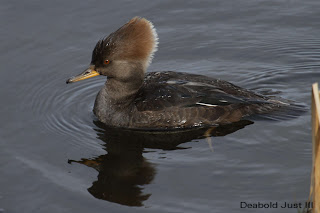 The weather turned for the worse as forecast and the light quality dropped.  I did find the owlets but the light did not favor them as it did the Hoodies.

We will do the owls another time.

I have never denied that writing this blog is a therapy of sorts. Sometimes a chance encounter during the day inspires an enchanting story. Sometimes I just get pissed. This one has to be said now.

The Pacific Ocean according to Wikipedia is the largest ocean on the planet.
With a surface area of about 63.8 million square miles it is about forty-six per cent of the earth’s surface. For those keeping score that is almost half.
(We all know how good the facts are we get from wiki and the quality of the writers who use them to support their arguments so just shut up and sit there while my rant move along.)
Dozens of countries with millions if not billions of humans all taking a dump at the shore line while scraping and drilling and netting every single resource and organism that can turn a profit.
But today a light on the horizon, could it be an answer? Yes, and in the news today a United States Federal Judge in the state of Oregon agrees with the brightest minds our government can afford on the topic of salmon restoration.  With all of the issues lined up and scrutinized the answer is clear. From global warming to rising ocean levels decreased salinity increased acidity caffeine, antidepressants, antibiotics, hormones, cocaine and THC in the waters around the world.
A vile insidious dark culprit has been identified as consuming as much as four per cent of the salmon stock in the Columbia River basin and must be dealt with. No mercy no quarter no more time.
No you did not misread that, 4%.

4%.
The Sea Lions must die.
http://www.komonews.com/news/local/Judge-rules-Wash-Ore-can-continue-killing-sea-lions-191534291.html 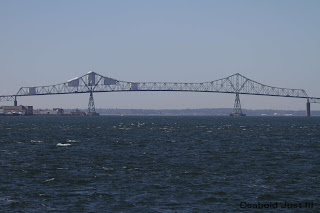 In October of 2012 we traveled through Astoria Oregon headed south. On
the East side of town on Hwy 30  becomes Lief Erickson Drive. At 36th
Street turn into the parking lot on the river side of the highway and
you find a parking with a wild life viewing area sign. So, we pulled in
and took a walk toward the water. 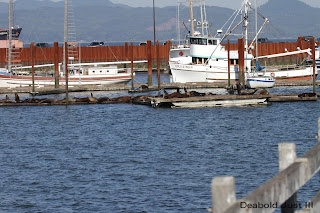 Just a few seconds into the walk I
could hear Sea Lions barking. 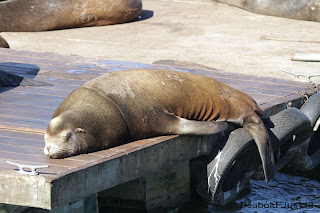 These are California Sea Lions. They are protected by State, Federal and International laws. Once there was a fear that they as well as the Sea Otters would disappear as the Steller"s Sea Cow had. Remember them? Probably not. They were hunted to extinction within thirty years of being discovered. 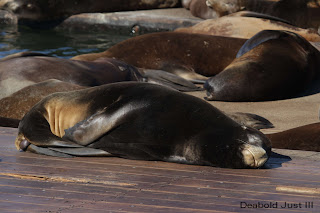 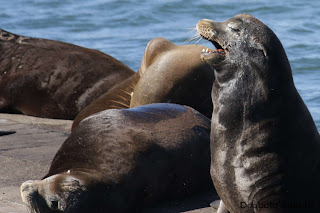 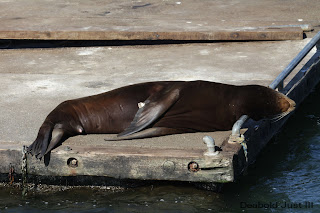 A tag in the right flipper indicates an encounter with a government authorized agency. 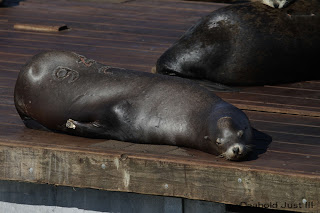 I started taking pictures with reckless abandon and when the excitement
slowed I started to notice the scars on the backs of some of the
animals. 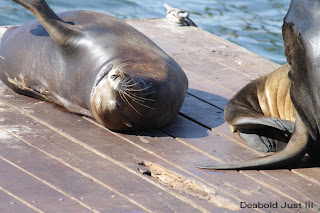 They were difficult to see with the naked eye but the 300mm lens with
the 18 megapixel sensor thing in the camera suddenly brought the whole story
together in a flash. 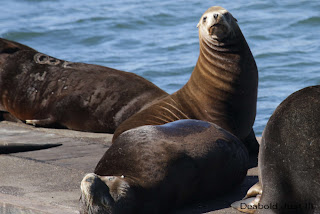 These are the trouble makers in the news for the past decades that eat
the fish at the base of the Bonneville dam further up stream on the
Columbia. 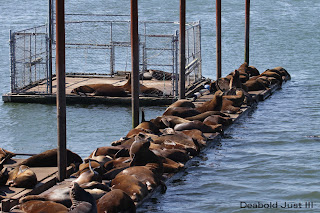 Looking closer I realized the float they
were on and near was a giant sea lion sized box trap and the boat that
takes it up to the dam was tied up right there next to another batch of
trouble makers. 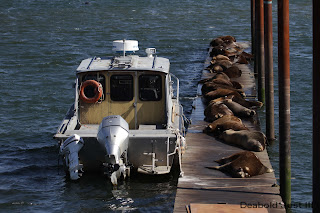 The sides of this boat are marked "RESEARCH" 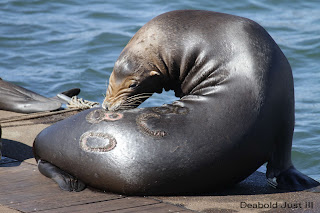 I do not know which method was used to mark these animals. I would assume liquid Nitrogen was used.  Regardless it appears it takes awhile to heal and is itchy.  The numbers on the tags are the same as the numbers branded into their backs. 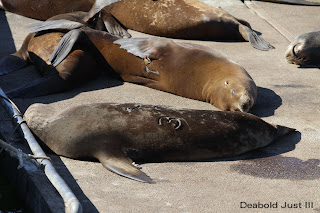 The number on the back of this sea lion appears to have healed completely. This is how the government employees will identify which animals are repeat offenders and identified for removal. 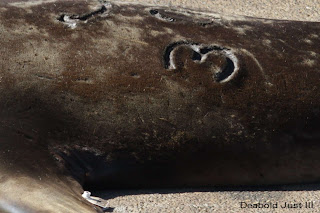 This is a closeup of the well healed brand. Makes you wonder how old the brand is. 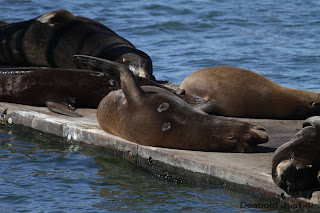 The marks on this Sea Lion appear to be bites from another.

How nice the Sea Lions must think that the stupid
humans tow their living room all the way up to the dam for them. Only to have the same guys start shooting bean bags from shotguns at you as the throw explosive devices to scare you off. THEN when you finally jump up from the icy water on to the float for a well deserved rest after gorging on fat juicily salmon, the door slams shut and you get a
dart in your ass, a hangover, a tag in your flipper and a number branded in you
back. And now marked for death.

Maybe later we will sit and talk about the tens of thousands of nesting Terns and Cormorants that are also protected under State, Federal and international laws being killed by our government just a few mile upstream from this location.  Evil Terns, Evil Cormorants and their dangerous little tiny babies.

I guess Sea lions are to fishermen as wolves are to ranchers.  Oh were killing wolves too by the way. Again another government program that protects a species until it impinges on another endangered species so a permit is issued to remove individuals to balance. I would say with us using up far more then the lions share (ha-ha) there should be something left over for the wildlife.

I have offered no solutions so my rant is pretty much useless. Just sitting here bitching.  I understand how complex the problem is and if I can help you understand it maybe the future will have a plan that doesn't keep going circles wasting money and lives. I just though I would put a face on the repercussions of the decision. I am sure the fisheries people take no joy in killing the Sea Lions.

When I as a kid my maternal grand father told me a story about a man looking under a light post for a quarter he had lost, when a second person came upon the scene and helped in the search. After awhile the second person became frustrated and asked the first if he was sure that  he had lost his quarter here.
He replied "No, I did not but the light is better here."

Sometimes it takes a long time to understand what someone is trying to tell you.