This is a blog topic that I have wanted to do before I even knew what a blog was. Even before I had a computer to express it with, so now after fifteen years of observation I have only a hand full of photographs to illustrate the wonder of the easily over looked Pacific Tree Frog.

As I have mentioned in the past, I am an amateur naturist, I make plant and animal observations and wonder if anyone has documented what I am seeing. My one shining moment as an amateur naturist came and went without me even knowing it happened. In the early 1980'2 My family and I were stationed a Fort Huachuca, Arizona. High in the mountains of south eastern Arizona, this was one of the most beautiful places I have ever lived. Not far from Tucson to the northwest and Tombstone to the east and only twenty miles north of the Mexican border it covers a number of habitats that are unique to the world.
Several times a year my wife, two toddler sons and myself would visit Ramsey Canyon south of Fort Huachuca. This is the hummingbird Meca of the desert. (Here is another free plug or theft, I do not which, if I am wrong please forgive and correct me.)
http://www.nature.org/wherewework/northamerica/states/arizona/preserves/art1973.html

Anyway, each visit included a short hike that passed by a concrete cattle pond. During visits in the warmer months there were fairly large Leopard Frogs living in and sitting around the pond edge. What brings to mind is that at no time of the year had I heard the frogs croaking. So I summed it up to the temperature not being right when I happened be there or just them being very shy.
Life goes on and several years later and I pick up a copy of one of the bigger nature/science magazines. Some guy from Illinois just happed to notice these odd Leopard Frogs in the cattle tank in Ramsey Canyon that did not vocalize. I was pissed, I knew that! I went on to read and this “guy” was some PHD in frogs from an university from the mid west. Well duh, he should know if anyone had seen these before, but wait they were there along whether or not we knew it.
Well this guy, who just happed to be some big frog dude gets to name it. OK, for me that defines the point of watching nature, the holy grail of naming an animal.

On a similar note, recently a snake guy was visiting an island in the Caribbean where he found and named the worlds smallest snake. This upset the islanders who had know of the snake for hundreds of years and had already named it.

For many years I have been fascinated by the Pacific Tree Frog. Every one was different. Dark ones lived in dark places, green in green places and gray in gray places. I thought that these frogs probably came in a great number of colors as they changed from tadpoles to frogs and that “natural selection” favored those who matched the color of thier environment over those who stood out from their environment. It was possible to watch the same frogs over long periods of time and I began to suspect they were changing color.

As soon as I bought my first digital camera started to take pictures when I could find them. They are not always easy to find with light good enough for photos. Here is some of what I have collected so far. 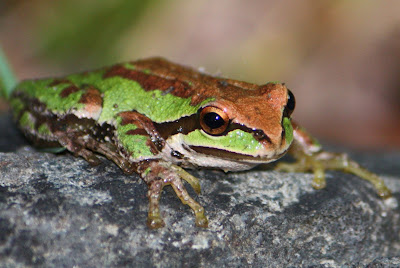 This female lives in our front garden among mixed vegetation. Her coloration did not help her when she jumped on to the dark rock. 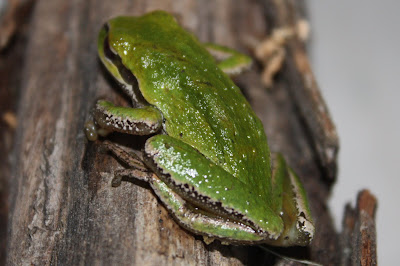 This frog was hiding on my lawn mower on the smooth green painted surface. 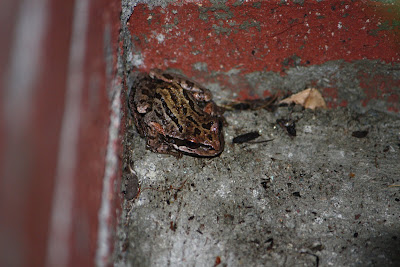 This and the next two photos are all the same frog observed over the course of ten minutes. This male spooked out of a potted plant on the front porch as I was watering it. He started out this dark brown/red color. 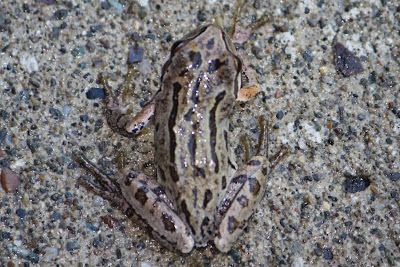 A few moments later my dog came out and the frog spooked, jumping out on the sidewalk where he quickly turned this whitish gray to match the concrete 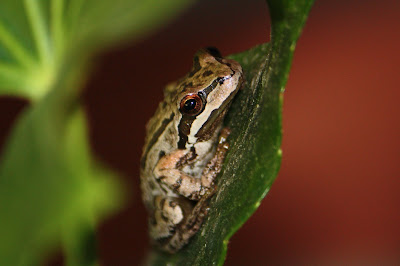 To keep him from drawing the attention of the puppy I put him up on the plant he had jumped away from and he quickly started to change back to a darker plant color. 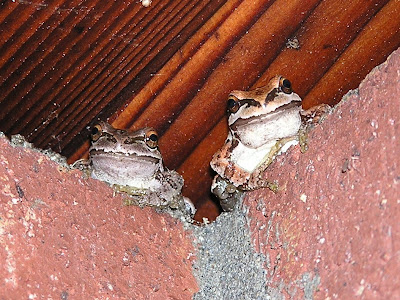 Here a pair of frogs hide in the niche where my brick wall meets the porch ceiling. The one on the left is a male and a female is on the right. They used this lofty perch for several weeks before moving their separate ways 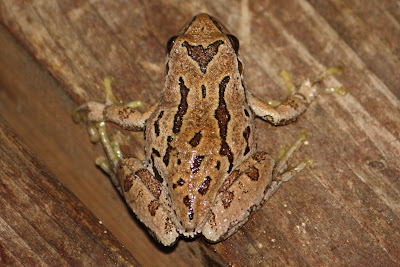 This female lives on our back porch where she uses the dog's water dish as her personal spa. For years I wondered why green slime grew in this dish but not any of the other around the yard. During a recent dry spell I found her in the dish every night around Nine PM. 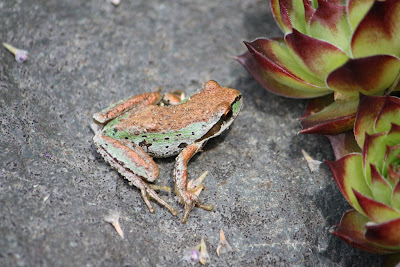 This little male lives in the Hen and Chicks that grow on the North side of our house. He has mastered the green and red of the spiny plant where he feeds and hides 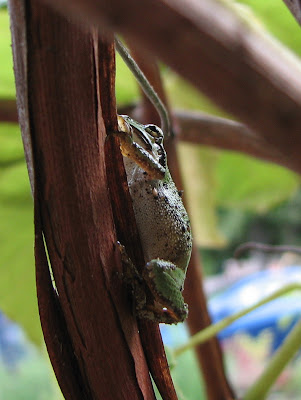 This female was found on a grape vine 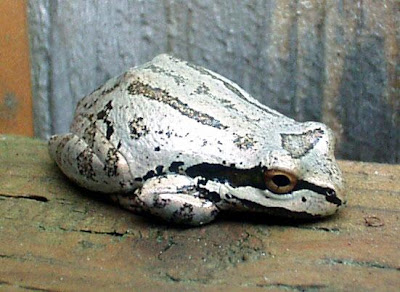 We used to have a wood burning hot tub that had a Baker style lean to over it. Here this frog had adapted to the white color of the canvas. 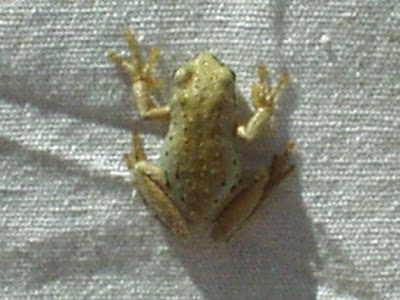 Here is another white frog on the canvas. This one is even trying to match the surface pattern to blend in. 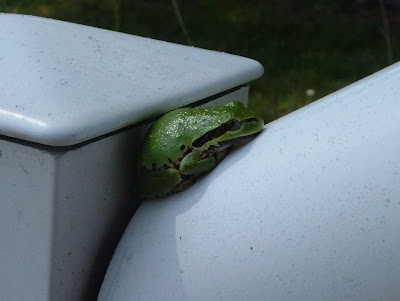 This frog was found right at sunrise. He stood out against the white hand rail. I do not know if he changed color or not, I did not see him again. 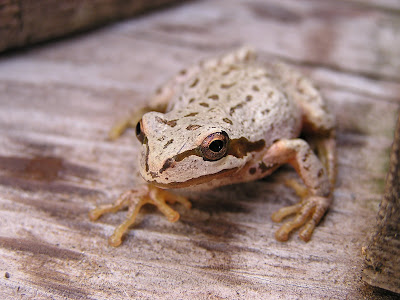 This frog lived on the faded cedar wood of the hot tub. Several frogs lived around the tub all year long where there was plenty of moisture and bugs. We had to check the water prior to heating it up to prevent any tragities. The ability to change colors was critical here, there were Garter Snakes living around the tub also looking for the frogs and earthworms. 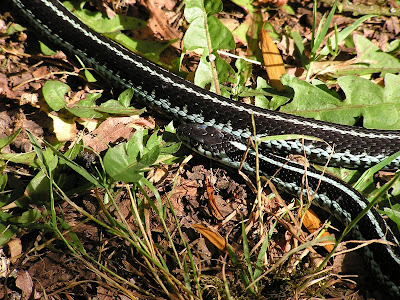 A number of predators feed on frogs. Grater Snakes are one of there biggest threats.

Frogs in general are an indicator species. If you do not see them you do not realize any thing is wrong. If you do see them then things are doing better. Go look for frogs in your yard, are they there? If not, why not? Is there something wrong? They are one of the smallest cogs in the bigger picture and if they are not there the picture is flawed.

Adding water spot to your yard will work just like a bird feeder. If the frogs are there they will come to the water. You just need to keep an eye on it to see if they are there.

Howell Campground on the Key had a stillion million frogs. Don't remember enjoying them at all. LOL

I love our tree frogs and raise babies each year. (great photos by the way)so how can you tell the females from the males? I know the males croak so those I can id for sure.
and in your blog post below this one, the pretty gold/brown butterfly is a woodland skipper.
I post photos of my tree frogs too.