The first week of December 2008 I took a week off to travel to Southern Florida for various reasons. Family, business opportunity and an overwhelming urge to get the hell out of town for awhile all intersected in a relaxing and splendid week.
The flight to Fort Lauderdale went off with any problems. The car rental company did not have the sub-compact economy car I requested so I had to settle for a convertible. It was seventy-five degree outside partly sunny, a no brainier. Sometimes you have to sacrifice.

I was going to spend time with my in-laws,wedge in a business meeting and go photograph birds. My in-laws Herb and Mary live in a beautiful neighborhood in Pembroke Pines about twenty-five miles from the airport. Herb was recovering from a leg injury and I had not been to visit in a few years. Early each day I was out on the road, golf course edges and ponds looking for any birds I could find. This is rather embarrassing but in the seven days I was there I took roughly 2200 digital photographs. I spent time at C.B. Smith Park, Pembroke Pines, Tree Top Park and Long Pine Key Park in Davie, Florida. I took a day trip to the Everglades National Park driving every road from east entrance to Flamingo. Mary was so nice to invite me along on a round of golf so I could ride along in the golf cart to get close to the birds that hang out at all the ponds around the course.
My business took me across the I-75 corridor to the Sarasota area. On the way back I spent and evening and the following morning on Sanibel Island and the "Ding' Darling Wildlife Refuge. Mid-day I headed out for the Corkscrew Sanctuary. Traveling back roads led to the best birding photos.

Getting home after this week of birding kismet started out normal enough then went terribly wrong when sitting for five hours on the runway on a late plane in Houston waiting to be deiced prior to take off. Only to have to go around for a second deicing due to poor procedures by the airport staff the first time.

Can you blame them? How often do they whip out the deicing equipment in Houston Texas?

So I got home after spending eleven hours on a four and half hour flight. Getting home after a week of riding around with the top down taking pictures of birds contrasted sharply with impending snow forecasts the day I got back.

Here is a strange and eclectic mix of photos from the past two weeks. 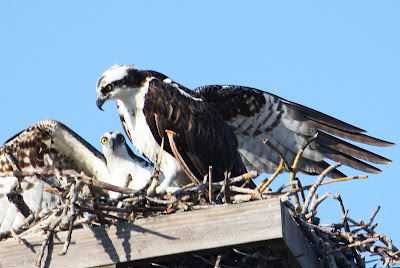 In the Everglades National park these Ospreys were collecting nesting materials and mating. During the week I was in Florida I saw over one hundred individual Ospreys and seven nesting pairs. 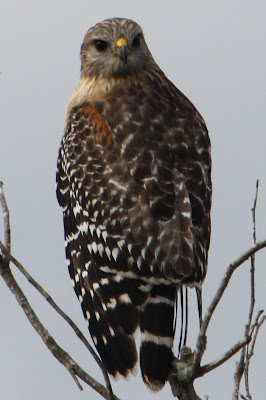 Red Shouldered Hawks were not as plentiful as the Ospreys but did allow me to get a number of these fantastic closeups. 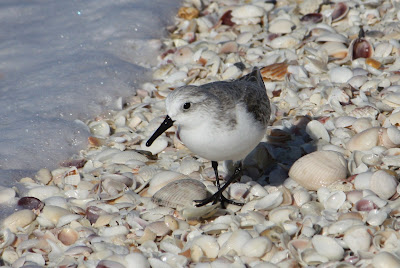 On Sanibel Island small flocks of Sanderlings fed along the mounds of sea shells in the surf. The beaches here are famous for the numbers and types of shell that wash up. 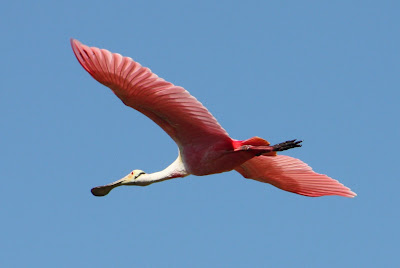 On the road from Fort Meyers to Immokalee, Florida I encountered small groups of Roseate Spoonbills and Wood Storks mixed with other wading birds. Along Florida Highway 580 I photographed more of these birds than anywhere else. I could not get this close to them at either the Everglades or Ding Darling. 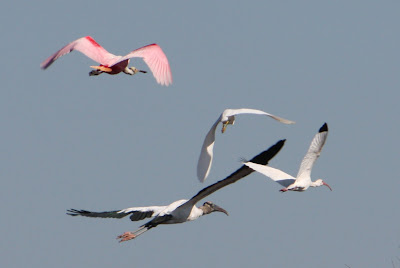 This photograph beautifully illustrates the variety of bird life in the Southern part of Florida. A large group of wading birds each specializing in a different feeding technique roam the ditches and fields. Here a Roseate Spoonbill upper left flies with a Great Egret and White Ibis to it's right while overtaking a lumbering Wood Stork. This week of sunny and mild weather ended abruptly the day I left. Ice storms from Orlando to Houston shocked the south and slowed air traffic for days. 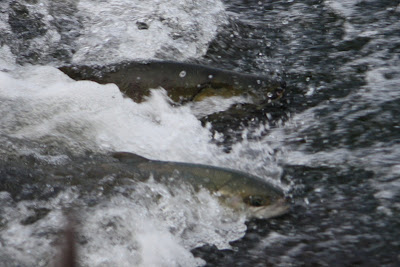 I got home in time to catch the end of the December Salmon run at the Chamber's Creek Dam. If I remember correctly these are a Male Chinook above and a female below. 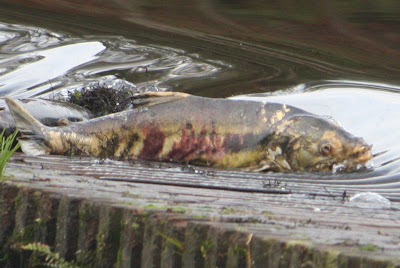 If you have read any of my previous posts you have heard this story before. 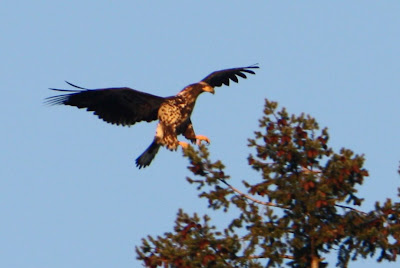 The rich harvest of salmon brought a recently fledged Bald Eagle back to his birth place. I had affectionately named this young eagle "A" when he/ she left the nest a few months ago. Now I just call "him/her" homegrown. 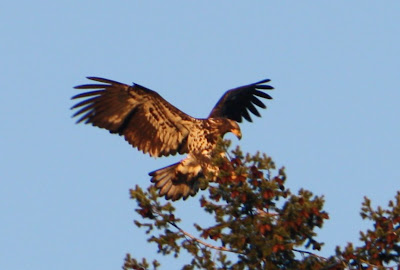 Homegrown lands in a tree over looking the migrating salmon just yards from the nest where he hatched out and fledged. The first snow of the year had just fallen and the temperatures dropped to the low 20's. 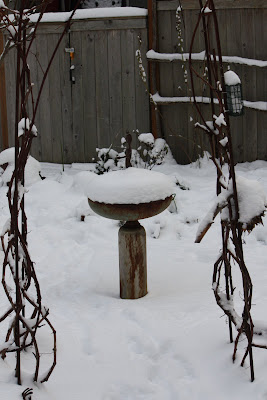 Something happened to stop the flow of water in my small fountain while I was out of town, The snows came before I had a chance to dig into it to get it fixed. The snow kept coming and the temperatures kept falling. The lowest I recall seeing was fourteen degrees. This is not normal for the south Puget Sound area but not unheard of. 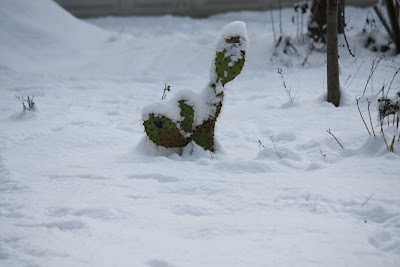 Heidi has been working on getting our Prickly Pair Cactus to acclimatize to the yard for a couple years now, the snow does not help but they are tough. This guy has been kicking around the house and yard for the past fifteen years. 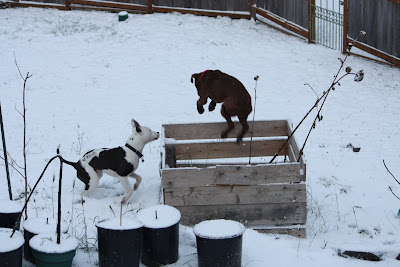 This is the first snow encounter for the dogs and they LOVE IT. Phoebe loves jumping in and out of the potato box to elude Lister. 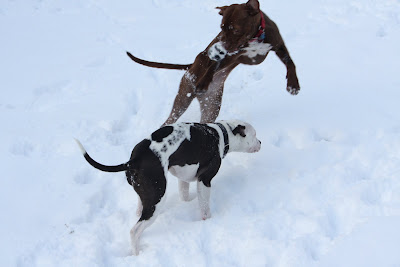 Any excuse to play. Lister is too big for Phoebe to throw around now but she sure does a good job of flipping him. 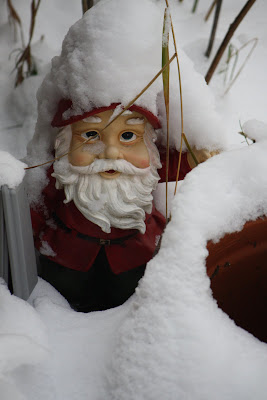 A little creepy but cute in his own special way. 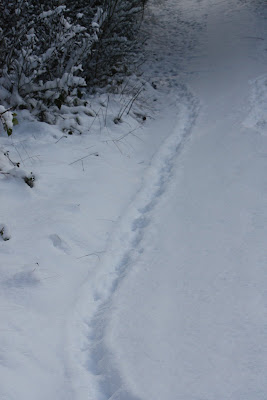 Bunny trail in the snow. 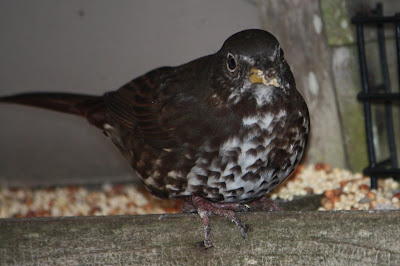 The cool weather had brought a Fox Sparrow to the feeder and new pond a few weeks ago, with the snow fall two more Fox Sparrows found their way to the sanctuary. 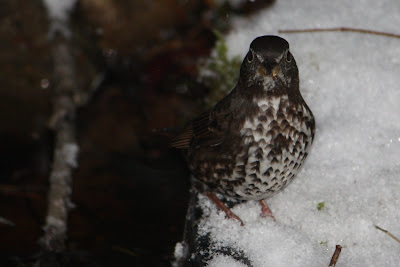 A little too cold for a bath but a drink is good. 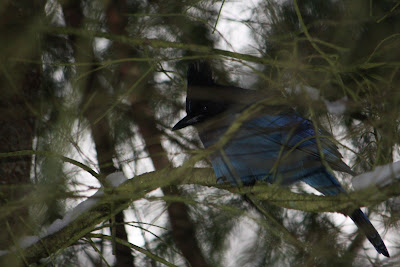 The Steller's Jays are ever present. 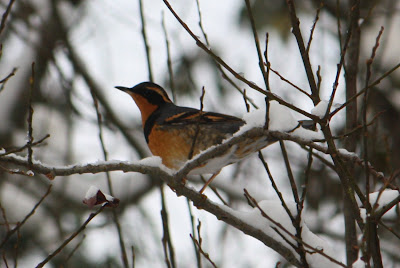 One thing that is predictable about winter int he Northwest is that when the snows start falling in the mountains the Varied Thrushes do a vertical migration from the Cascades to the Puget Sound. This male Varied Thrush was very shy and would not allow any pictures at the water's edge. 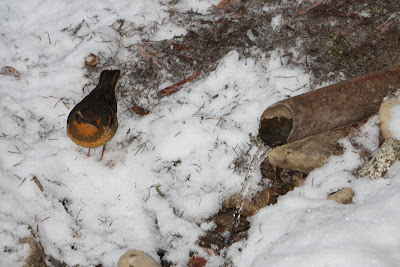 The female Varied Thrush was not as shy and allowed me to take several fantastic pictures. 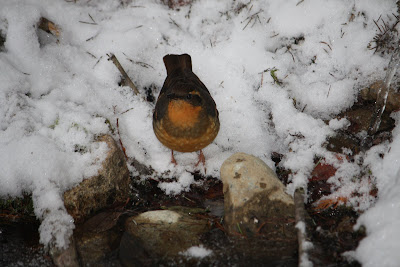 When I originally envisioned building this pond I knew that if we had any significant snow fall during the winter I would have a chance to get a picture like this. I could see it in my mind's eye years ago, it just had to come together. I will get the pretty boy next.

Well, my past two weeks have been a bit busy and exciting. My trip to the in-laws was most enjoyable, the business trip promising and the bird photography simply amazing. I have over fifty pictures of the trip posted on my Flikr site. They are kinda two dimensional, this blog is more informative but I can not write everything here or I would never hit the "publish" button.

So here I sit with a tan and nine inches of snow at the door as I delete Florida birding pictures. Over all it has been very relaxing. My deepest thanks and love to Mary and Herb for the week, I hope to get back soon.