Cock of the Walk

I do not know when or how it happened but a little white Bantum Rooster appeared and took up residence at the dam on the creek. I first noticed him in the middle of February then again a few days ago.  I can not imagine how he would have gotten there on his own and I would hope that someone was not so cruel hearted as to dump him off between a pond, a busy road and a thick forest.  Some people are just assholes. 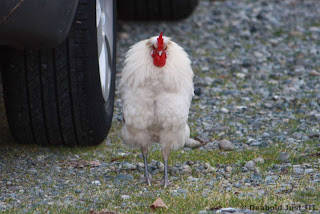 Today he noticed me or rather he noticed my car. I parked and walked to take a closer look a a possible Kingfisher nesting site. As I walked to the bridge I heard the rooster crow from a blackberry thicket between the road and the fresh water pool behind the dam.  It was early and cold so my scouting trip was not all that long. On my way back I was greeted by the rooster. He had taken up a commanding position and challenged me as I approached. 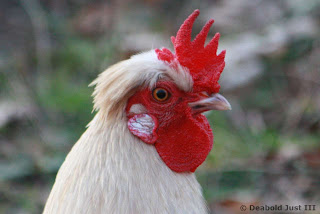 With all of the predators that I have seen in the area this little guy needs to watch his step. Just after I had heard his crowing I saw two Raccoons running across the road.  The heavy traffic is an even greater hazard.

WALKING ON THE HOOD OF MY CAR IS NOT A SMART MOVE. 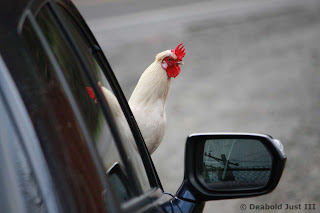 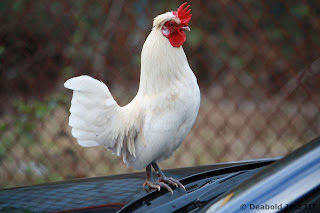 Why do I travel with bird food? 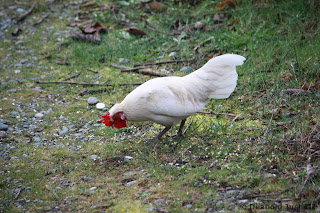 You never know when you will need it.
Breakfast is served.
Posted by birdmandea at 8:42 PM

Damn Dea! I thought you were going to say you threw a blanket over him and took him home!