One of my greatest joys in photographing wildlife is when I encounter an animal that I recognize.  Usually it is a color deviation that sets a bird apart but some times it is wing or foot injury or bill deformity.  With the smaller birds it’s attitude and location. This is an encounter with one of my favorite birds.

Young Bald Eagles do not obtain the classic white head over dark brown body until their fourth or fifth year.  Until then each time they molt out old feathers the new ones  change their appearance.   So much so they could be confused for a totally different bird each year.  As they reach their third year they start to look dirty adults.  I have a few dozen photographs of one eagle in particular that had a golden hue that set it apart from the other eagles around the dam this week.

Here is a encounter with her one sunny morning. 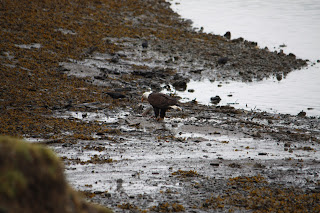 I spotted this adult feeding below the dam from a half mile away and quickly moved in it's direction. 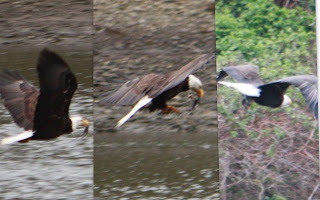 As I approached still unseen the eagle finished up and took off with a carcass in it's mouth. As it flies she pulls off this neat mouth to talon transfer. This is the female that rules this strip of waterway. 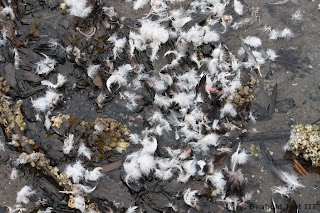 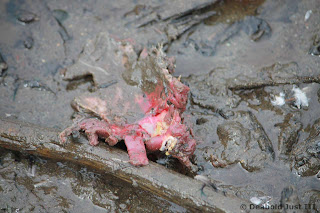 I took this moment to see what she had been eating.  As you can see there was not much left to identify. Best guess... a male Common Merganser.  The mergansers had been feeding heavily on recently release  salmon.  Tired and overloaded this duck was an easy target for the adult eagle. A two for one deal for the eagle, duck with a side of yearling salmon.

I was not alone. I felt a presents, a pressure a wave and for a fleeting moment I regressed to timid little monkey looking up in shock.  The golden bald eagle pasted within feet of my head as she floated by silently. 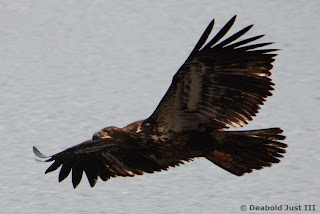 I moved off the mud flat and sat at the base of a tree. 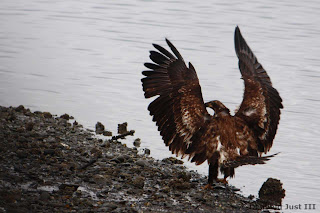 She made a several orbits sizing up my position, the adult eagle that had just left and how much of a risk the food was worth.  She did not seem to want to land on the mud and took a couple more orbits looking for just the right spot to set down.  The lesser of evils was to land on the wet rocks at the water line.   Ever so gently. 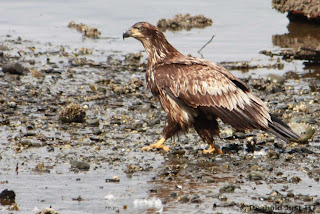 Each foot set was placed carefully.  An eagle tip toeing with a distain for mud. 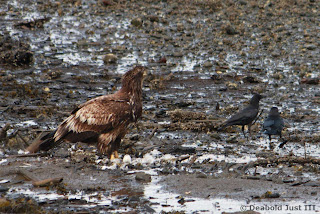 The ever present crows dropped in for a quick look. She looked at every square inch of the duck debris and saw nothing worth walking in the mud over. 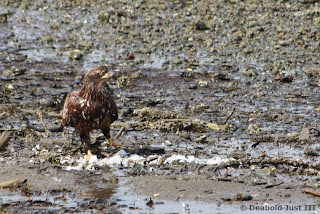 She hunched and looked upward  just as I caught a shadow moving out of the corner of my right eye. 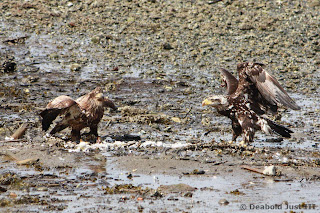 We were not the only ones looking at the feathers on the mud. 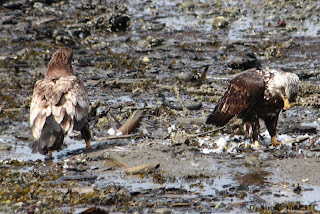 The second eagle is older. third or fourth year. I had seen these two sitting on the fresh water side of the dam the day before. I believe they are siblings from different years. 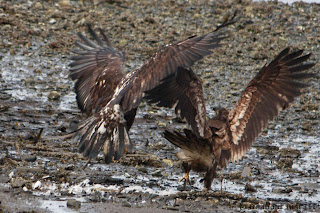 Apparently the older bird decided the scattered feathers were hers. 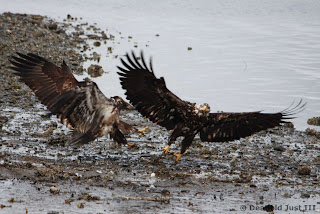 Goldie took issue with that decision and expressed her feelings with it.  They traded a few half hearted swipes at each other and agreed there was nothing here worth getting hurt over. 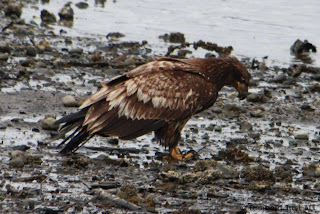 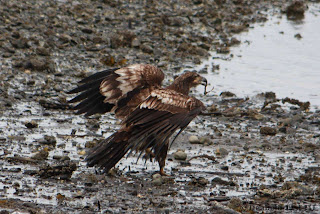 Wish you had a duck? 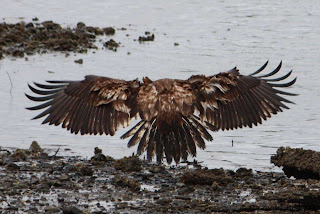 On to better hunting. These photos were taken in April. You can see the wear and tear on the feathers. They molted out over the summer and she took on a golden "shield" on her back as her wings darkened. I followed her for two more years each spring and then she was gone. The thing is that I might still see her from time to time but I couldn't tell you if it was her, the gold is gone.
The adult that was feeding on the duck at the start I believe was a parent to both of these young birds. I had seen both of the adults flying and sitting with these two as well as two other young birds.  Adult eagles entering the area during this time were not treated so kindly.

Below is a short film strip of all of the pictures taken during this encounter. The fight was short but exciting.

I have read and through personal observation understand that female bald eagles are a little larger then a male.  Unfortunately  young eagles have larger feathers then adults. Think of them as training wheels for birds.  That works fine if you have to eagles sitting side by side and don’t fluff out the feathers.  So for the most part it's hard to tell them apart without experience and optics.  Another diagnostic key is that females have larger bills.  Some people have big noses.  ?   She has a big bill.  The adult eagle in the first photos is the female from the nest. Look at how big her bill is.

Maybe it's time for an eagle head shot quiz...I'll pull that together for later.

Posted by birdmandea at 6:39 AM

Wonderful photos and description of your encounter with these magnificent birds. Thanks so much for sharing!

You constantly amaze me! Please we are LONG over due for a new entry!