There are a trio of Osprey nests north of my house and a favorite fishing location for some of the adults  to the south. During this summer Osprey made dozens of sorties to and from. Return trips included a variety of fish. Young salmon, small Starry Flounder and ugly green bumpy fish were the most common. Others were too difficult to identify.   The Osprey were often followed by Bald Eagles some distance behind both coming and going. Where ever you find Osprey you will find Bald Eagles looking to steal from them.

My resident family of crows took offense to the first few intrusions when the Osprey first returned from the south but quickly recognized them as no threat.  Bald Eagles, Ravens and Red Tailed Hawks were rarely given a free pass. My clan of crows is just one of dozens along this flight path.

On a beautiful Sunday morning and an Osprey flew South overhead. I walked into the house grabbed a coffee refill, the camera and a chair on my way back out.   I adjusted the camera for the conditions settled in and few sips later a large southbound eagle appeared. Instantly two of the three crows were on her. She turned to the east and took cover in the tall Douglas Firs that crest the ridge line. 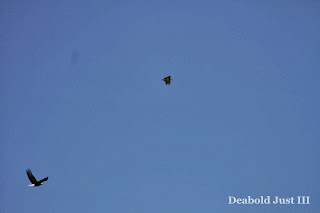 Just moments later a north bound Osprey appeared. She was higher then normal and climbing fast. As I found her in the viewfinder I saw why. The eagle that had just passed was ambushing her. 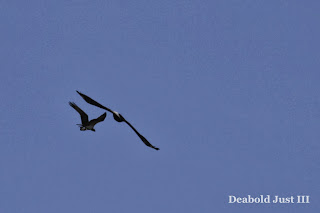 The Osprey had a pretty good altitude advantage going into this ambush but the prize in her talons was now a serious problem. 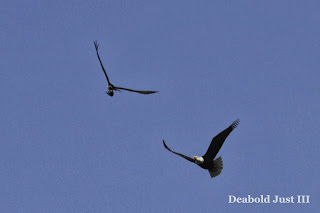 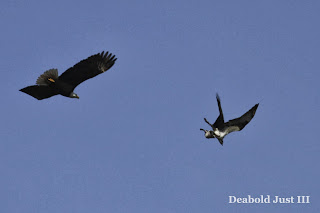 A change of tactics was needed and needed fast. The Osprey turned sharply and began to spiral downward counter clockwise toward the east. 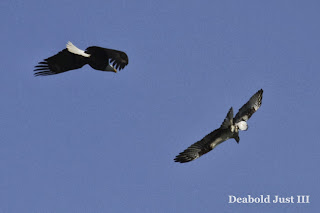 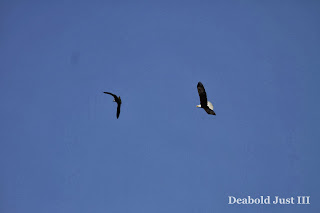 At first this maneuver gave the osprey a burst of speed that left the eagle far behind. Once the eagle nosed down she closed that gap in seconds. 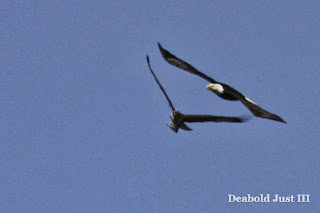 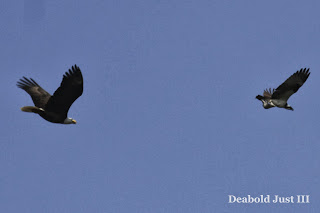 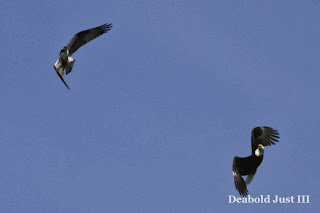 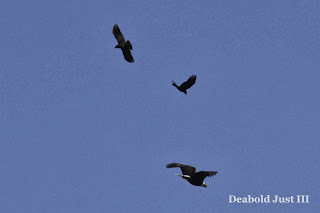 The Osprey has had to deal with this before and while fancy flying might eventually get her safely home with her fish. She had a better idea. 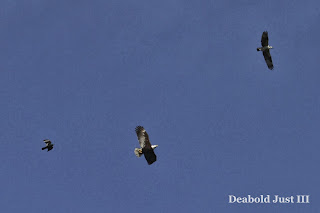 She simply flew head on into the trio of pissed off crows rising up to drive the eagle away. 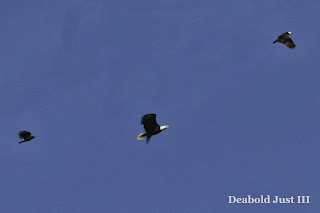 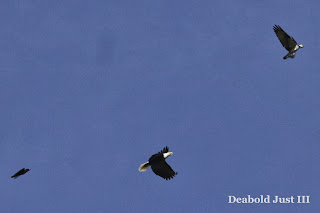 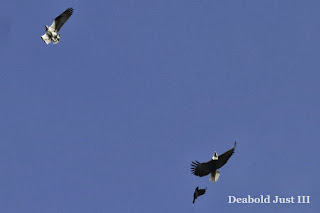 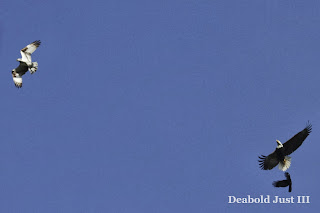 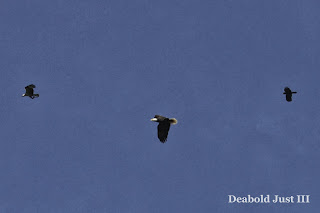 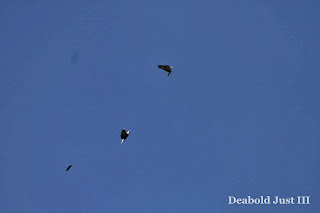 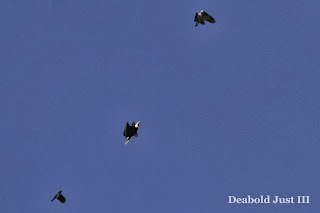 After a couple orbits to "rest" the Osprey pulled up sharply into another clockwise spiral. In these few moments in crows cut the corners and closed in on the Eagle. 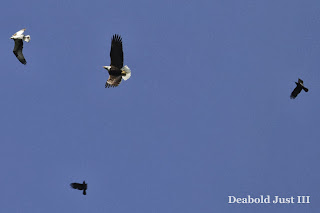 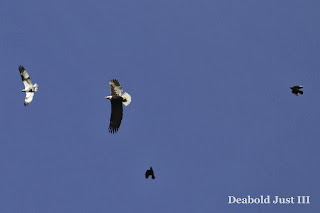 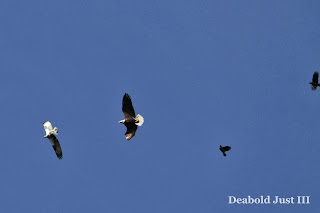 Too much work for the Eagle. The Osprey kept her fish. The Crows defended their home front. The Eagle reset the trap. This drama played out several times this summer. Following the same basic flight path the attacks varied with the Eagles sometimes chasing Osprey that did not carry fish. But they only attacked them as they headed North, toward the nests of both.

You never know who your friends are.

Posted by birdmandea at 4:18 PM

I don't know where this took place but I appreciate the story! Since I'm so new to observing the birds in my neighborhood...there was a day, directly across the street from my house and I was astounded! There was an eagle (so I thought) hovering above the pond...just holdng position...then, dove straight down and came out with a fish! Of course, I learned it was actually an osprey. I have SO much to learn!

Awesome series of photos! I caught an eagle and osprey in a flounder fight on the mud, but have never seen an aerial battle such as this. Wow!!!