A leg to stand on

As a kid I read a story about a king. This king loved to eat.  He had the finest chef in the land prepare his many daily meals. His appetite ruled his wealth and the king sent purveyors to the far corners of the world for the best of things to eat.  Every manner of creature was fair game for the kings table.  The chef dutifully prepared every dish for the king. One of these meals was so good that the chief could not resist tasting a sumptuous exotic bird he had prepared.  A Flamingo.

The chef could not resist the aroma. One small taste lead to another and another and before he knew it he had eaten a whole leg.  With juice running down his face the chef heard the king demanding his meal.  The chief panicked. He knew the king wasn't the kinda guy that wrote unfavorable reference letters. There were not other dishes ready to go so the chef covered up the missing leg the best he could and served the bird hoping the king would not notice.

With great fanfare the Roasted Flamingo was paraded in to the king. When the cover was removed the  king and court gasped. The king became enraged when he saw the one legged bird on the plate and demanded punishment for whom ever took the leg.

The chef wanted to keep his head as well as his job and quickly pointed out that Flamingos were a one legged bird.  He directed the king’s attention to the sleeping flamingos in the nearby fountain. They were all standing on one leg. Bla, bla, bla.  The king relaxed and ate his meal and the chief kept his head.

It was a lame story so I started to ask people in my life why birds stood on one foot.  I found that there were three schools of thought on the topic.

One foot was either cold or tired.
Because they can.
And last but not least, Why do you care?

So why do birds stand on one leg? For that matter why do they chose to stand on ice or in water?  From recent personal experience as a new yoga student it’s not easy.  Yet birds do it in their sleep, with their head under their wing with one eye open!  Or did you think there were really one legged birds in the world? 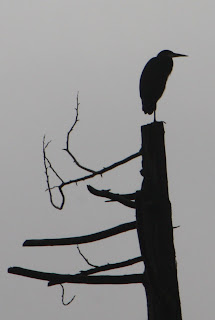 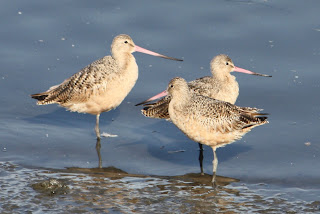 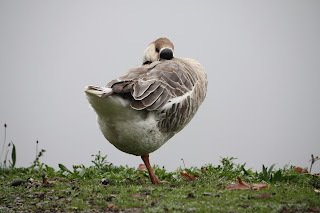 Chinese Goose.
This bird flocked through with a band of Crackling Geese a few years ago. 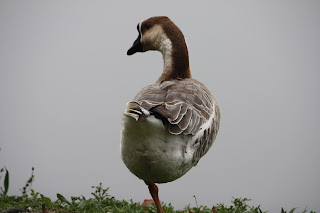 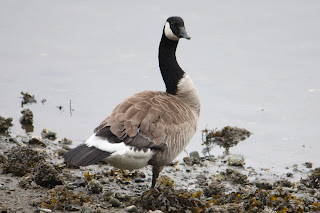 Canada Goose. Big birds do it just as easily as the smaller ones. 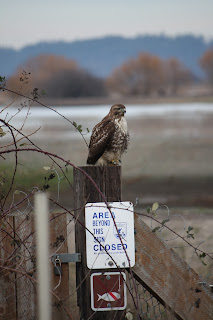 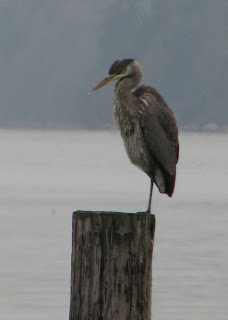 Great Blue Heron.
This bird takes it's nap the on the very edge while on one leg! 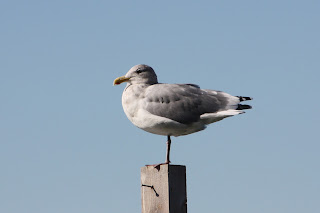 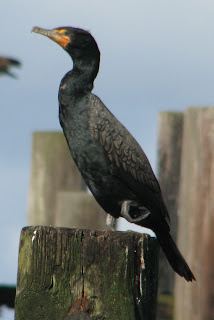 Double Crested Cormorant.
With thick stubby legs set so far back on the cormorants body they can barely walk yet work just as well and any other. 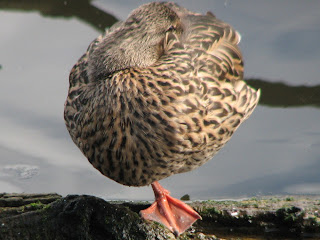 Female Mallard.
Peeking with one eye while napping.


So if you have two feet you can lift one any time you want.  What if you only have one foot? 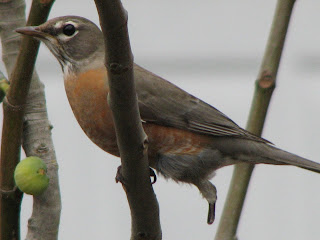 During a migration wave of American Robins headed south a few years ago I noticed this female.
She lingered at the fountain trying to perch and not fall in.  The other robins pushed her around without mercy.  They didn't seem to do it intentionally, she just couldn't be as aggressive.

Predator, injury, deformity or disease, your guess is as good as any. 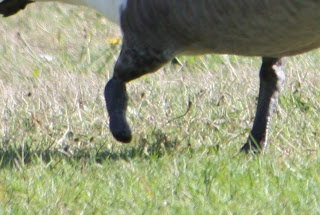 Geese and ducks on the other hand have something nature had not planned on. Steel shot pellets. With lead shot being banned many years ago the number of injured waterfowl surviving being shot has increased. The steel replacing lead in shotgun shells is not as dense but is non toxic.  Birds wounded have a better chance of surviving if the don't have to deal with lead poisoning while recovering. I'm sure this would start an argument in a few circles but each January I find a number of waterfowl that show foot, leg and wing injuries.  I have seen several Canada Geese with foot and wing damage survive for months while recovering near the local dam.  Eventually the Bald Eagles ate every one.  This Canada Goose has survived a serious hit to the undercarriage.  S/he was with a small flock of twelve other "whole" geese and had no trouble keeping up the pace as they grazed across the lawn under the flag pole on Fort Lewis. 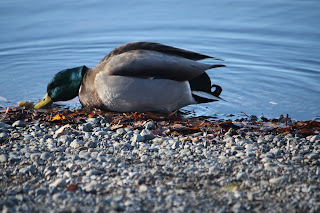 This Drake Mallard has a very hard time walking and swimming.  His injury appeared to be fresh so his fate is unknown.

New question.
Did Tyrannosaurus Rex and their kin sleep standing on one foot?

Posted by birdmandea at 5:55 AM