I live on a hill that slopes down to the Southern Puget Sound. During the spring and fall Birds of Prey migrate along the shore line to avoid the open cold water. All though open water can be cross by the Eagles, most hawks, falcons and vultures use the updrafts and thermals about a half mile inland to coast along effortlessly. Cold water does not offer thermal updrafts the hawks, falcons and vultures need to supplement these dangerous trips. Eagles will fly to great heights over land then glide over the cold void. My yard is about 280 feet above sea level with an unobstructed view to the water. This puts a great number of hawks passing by just above the house or right out in front.

I have a clan of three crows that patrol this airspace. They have a distinct call that the designated lookout for the day issues when an intruder attempts to pass through. For the most part Osprey and vultures move through with out much if any harassment. The local Copper's and Sharp-shinned Hawks are always mobbed and driven away as fast as possible. The local Steller's Jays readily join in, they have the most to lose to these predators. A Crow is more that a match for a Sharpy and a Copper's yield quickly. Red Tailed Hawks are different. Red Tails will take an unwary immature Crow without hesitation. Crows have to work a little at pushing a big hawk out of their air space.

Yesterday only one Crow was holding down the fort when a pair of Red Tailed Hawks drifted in. I recognized the call and grabbed my camera. I am using a Cannon S3IS with a 1.5 converter lens. When I take bird pictures I try to never to go beyond the 12x optical zoom, I find the digital zoom poor for photos but usable as a tool to see out further without having to use binoculars. I have cropped these photos to show the interactions. 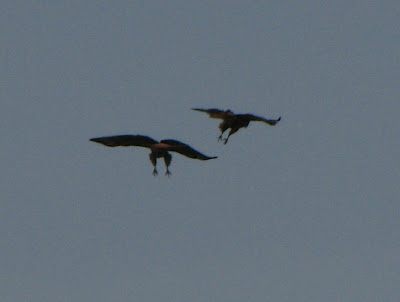 It is late April and this pair of Red Tails were doing slow loops on the updraft from the shore. A larger hawk was soaring in wide circles while a smaller hawk would flap to gain altitude and glide down approaching the larger hawk from the rear attempting to touch it on the back. This is the courtship dance of the Red Tailed Hawk. The larger hawk is the female. The females of most Raptors are about one third larger than the males. As the male approaches the female can reject his advances by turning away rapidly to test his endurance or flip over on her back flashing her talons as a warning to move off. If after several passes or hours or even days of this, the female allows the male to actually come close enough to touch her, she has accepted his advance and they will go off to a tree and mate. They may nest locally or continue on their migration to a nesting area they have used in years prior.

I have read that some hawks and eagles mate for life. Some may, I sure that not all do. If you want to go Jane Hathaway on me, go ahead, this is only a recreational blog and I am an amateur naturalist. If you look hard enough I am sure I will give you something to question. I try to call them as I see them.

This particular courtship dance was taking place in the Crow's territory. Without back up or hesitation the Crow rose to the occasion to drive off both of the hawks. 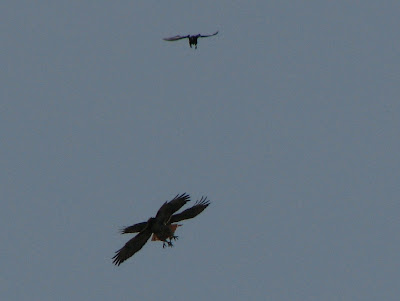 I have always tried to see animal interactions for what they were. Survival. Crows and how they react to hawks and eagles are largely preemptive strikes to let the predator know they have lost the element to surprise and it is time to move on. Sometimes they are just out right unnecessary to make a point. Crows are more evolved than hawks and have an upper hand in thinking through their maneuvers like this. The hawks reacts just enough to avoid impact from the crows. They move on, wait for the crows to tire or think it has made it's point and quit. If the hawk is luck the crow will make a mistake and if the hawk is hungry, dinner has presented it's self. 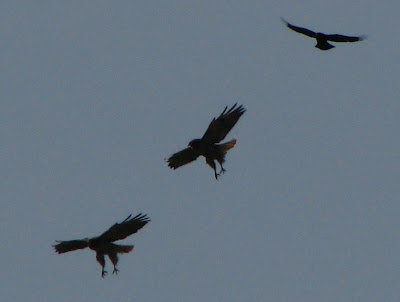 Think of how bold you have to be to take on two predators both at more than twice your size in their element without help or a backup plan. How can you fly with stones like those? Move on guys.... 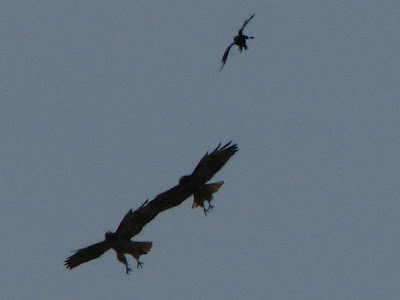 The crow was very careful to keep it's distance. The hawks flight path was influenced slightly by the crows interference but for the most part the hawks just went about their way and the male made several passes over the female until she allowed him to touch her. 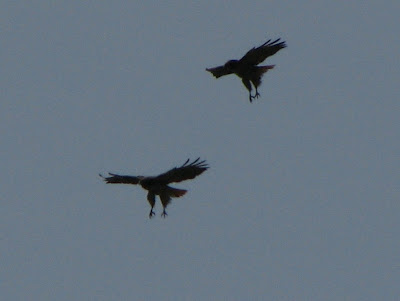 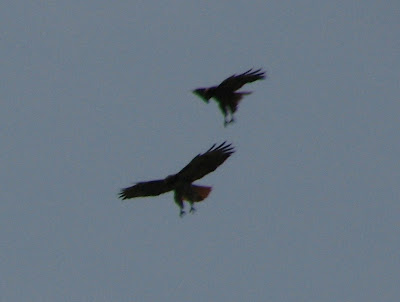 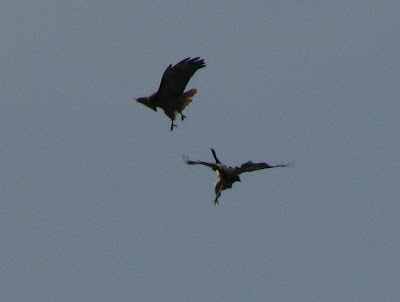 After this last successful touch by the male he pealed off sharply and the pair slowly worked their way further inland and higher then landed in a group of second growth Douglas Firs over a hundred feet tall. They just melted into the thick cover.

Today I heard the pair of hawks screaming out their vocal claim to this nesting area from the Doug Firs. I hope to see them soon.

In closing here is a photo from two weeks ago. I believe it to be the same crow and the female hawk. The crow was extremely agitated and made contact with the hawk at least three times before she left. 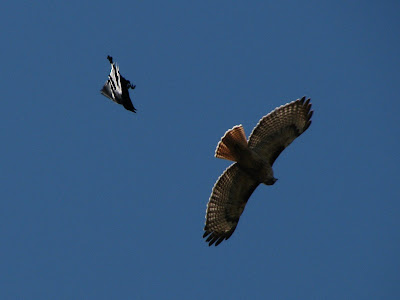 Gorgeous pictures and wonderful story. Thank you so much. Our Ospreys in Tarpon Springs, Florida do that mating dance also. It is so thrilling to watch.