In the past weeks the weather here in the Puget Sound has been a bit rough. Forage and open water have been very important to the small birds of the area. The smaller the bird the harder it is to travel great distances to find food and water. It boils down to a stark reality, one missed meal, an injury or any unnecessary caloric expenditure and the end may not be far away.
I bitch about the chill I get if I am careless enough to take the dogs out and I forget my coat. Yet I take for granted that the little birds in the the yard will be there in the morning, even as I get under the covers of my warm bed in a heated house. The birds tough it out in the elements all night long. Cold, rain, snow, wind and not to mention predators.

In the past three weeks I have been very fortunate to have a flock of Bushtits visiting my feeders and water spot. They never follow a routine, they never stop and they never stay long.

The following are some of the better shots I was able to capture. 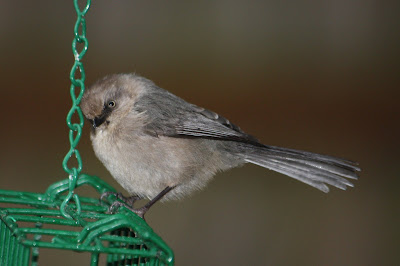 The only notable difference between bushtits is that the eye color is black in males and sub-adults and yellow in females. 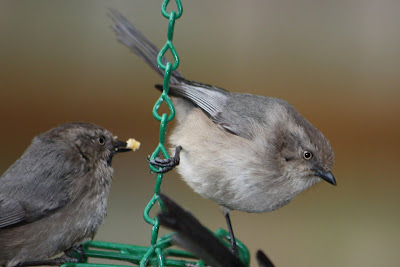 These are tiny birds, imagine two to four raisins in weight. Suet is a high energy food that draws Bushtits to feeders during the winter months. Surprisingly Bushtits are carnivores. Small insects are hard to find in the winter but Bushtits are constantly working to keep the calorie intake up. In doing so they are constantly burning those preciously hard won reserves. The bugs they consume in the winter are dormant and barley visible to the naked (human) eye. 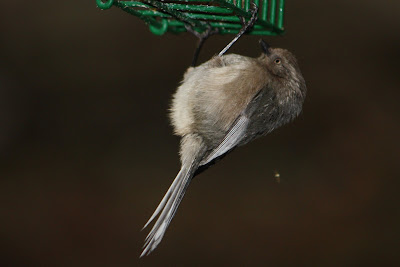 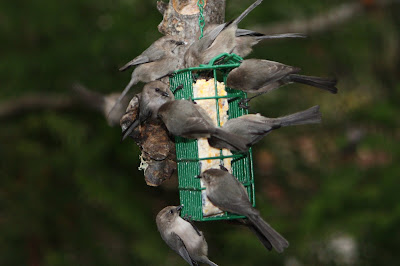 The best defense for small birds as well as Bushtits is to flock. The confusion of movement and many sharp eyes make it hard for predators to single out an individual for an attack. Bushtits should not have much to worry about, they are not much of a prize for even the smallest of predators. 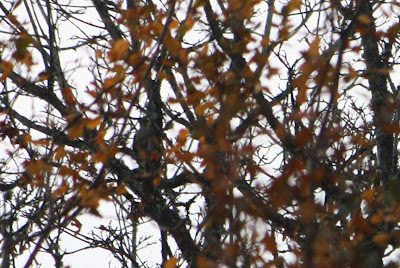 Even with the flock defense working it does not mean that predators will not try. Can you see the crow sized adult Cooper's Hawk in this picture? If not you would surely be a dead little Bushtit.
This hawk is a specialist in stalking small birds in forested haunts. Stealth, speed and a sometimes seeming reckless disregard for self injury Cooper's Hawks will pursue their prey through the thickest of brush. When all else fails speed is an option.

Here are some more portraits of the feeder visitors. 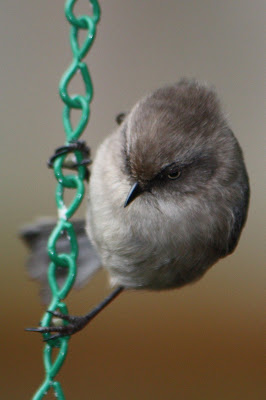 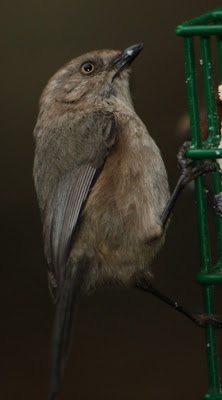 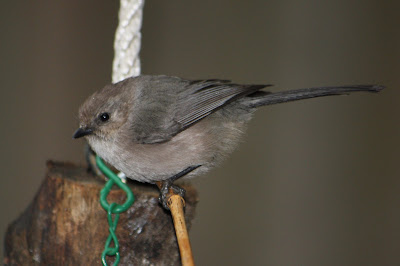 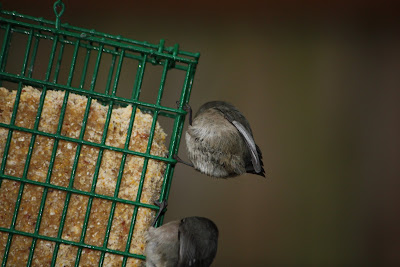 This Bushtit has no tail, why? I have no clue as to how it effects the birds flight or function in life. It must have some influence on flight capabilities. (But then again bushtits are not long distance fliers, they tend to flit from point to point in an erratic, unpredictable and undulating method.) Genetics, attempted predation, illness, malnutrition or just a freak, I doubt if I will ever know. This bird is so small and I do not know if I will ever see it again.


Last night a storm front passed through the South sound. High winds whipped the yard and the house shuddered. This morning I went out to survey for damage. 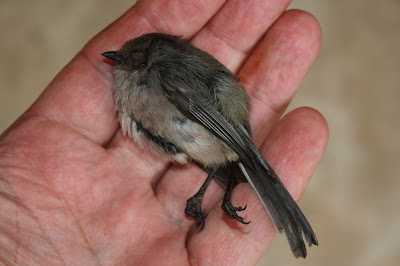 I was dismayed to find this Bushtit in the driveway. He was on the asphalt near the garage door. The best assumption I can make is that the wind caught this little guy as he rounded the corner coming away from the feeder and slammed him in to the garage door. After looking at the previous pictures, this picture suddenly put things in to a new perspective. How can something so small and frail exist in the world of the wild? Yet I know that for millions of years billions of individuals have. 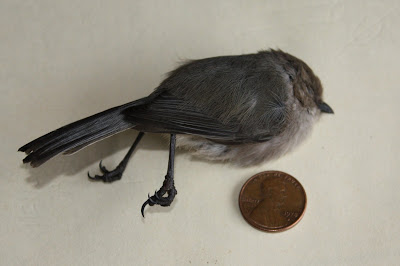 If this bird had died in a bush it would have never been found. Here is an opportunity to learn and marvel in the size and structure of this amazing little guy. 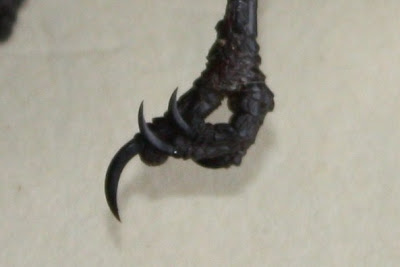 I am not sure but I would imagine that pound for pound the bushtit's "talons" would a fair bit larger that a Bald Eagles! They look even larger in proportion that those on the velaceraptors in the movie Jurassic Park. 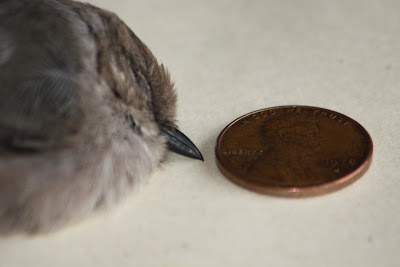 What better comparison can be made then this?
Posted by birdmandea at 4:27 PM

You are absolutely amazing in your observations!

the bushtit posting is my favorite so far!

what a groupie I am BirdmanDea thanks so much for sharing your wonderful life with us!

http://www.toruonu.ee/?pid=434
Check this out. Amazing photos