Each season has one irrefutable sign that signals the change.

It may be a smell, a breeze, a color, a feeling or something just beyond the grasp of words. 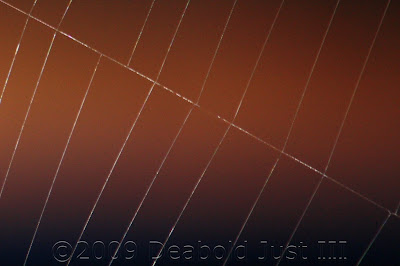 Here in the Puget Sound lowlands The first gentle whisper of Fall is seen as a single silken thread. At first it goes unnoticed then there are two, three, then suddenly thousands. Spiders by the hundreds enter into the last lap of their journey and set the path for their next generation. 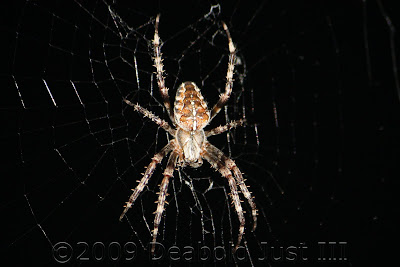 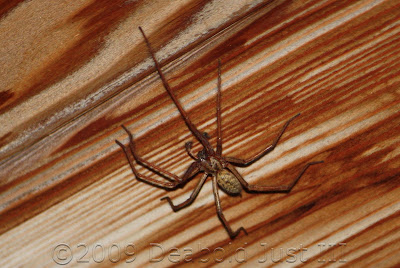 Male
The first few days of September each year are when the webs appear. At first they are novel and neat to see then they become a nuisance and by the end of the month they become unnerving. 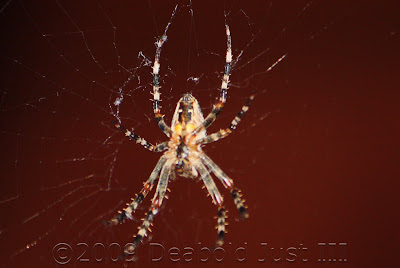 I am not afraid of spiders, I will keep a healthy distance as I am not stupid. But...when quietly walking through the woods, minding my own business and with out any warning I do a face plant into a 30" wide spider web that is so strong you can hear the threads snaps as your momentum carries you forward...my brain starts screaming "SHIT!!!!!!....back up!....stop!...#$@&", I do tend to freak out. It is not pretty. 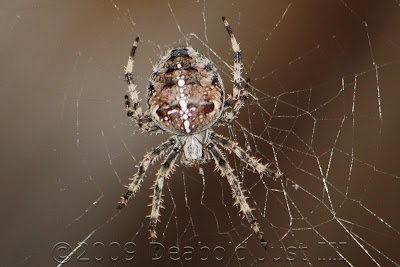 At this point I do have to admit it is kinda funny how fast my brain will rocket ahead while my body is just "doe-dee-doughing along" as you feel a spider the size of a half dollar run across your face. Many years ago I was in an Infantry unit here at Fort Lewis. I remember a patrol we were on one fall when our Airborne, Ranger, Path Finder, Viet Nam Combat Veteran squad leader walked into a spider wed while in the thick brush. He took off screaming like a little red headed girl, shedding equipment and dignity as he stripped away all of our tactical efforts. We each strive to suppress what we fear but spiders and snakes tend to over ride all of your efforts to live within reason.


I do feel a little guilty that I do not know what kind of spiders these are. If it were a bird I could tell you it's name. There are thousands if not tens of thousands per square mile during their fall web weaving and breeding season near my home.

Yesterday my wife called me to the kitchen window. "These two spiders are either going to have sex or fight." She was right on both accounts. As I flew through the house I grabbed the camera and went outside by the window and started to take pictures. 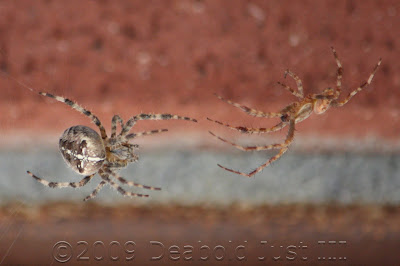 Here the Female is on the left and the Male to the right. 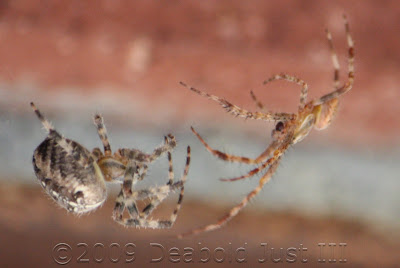 The Male slowly and gently approached the Female cautiously extending his front legs as if trying to reach over the Female. He is gently tapping the web in front of him. 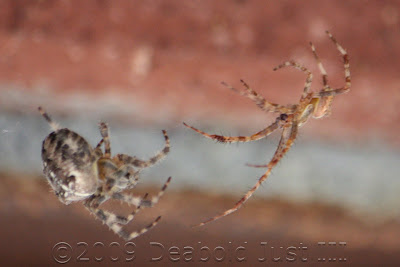 Several slow tapping approaches seemed to sooth the Female and with each gentle tap she retracted her defensive posture and drew her front legs back to toward her body. 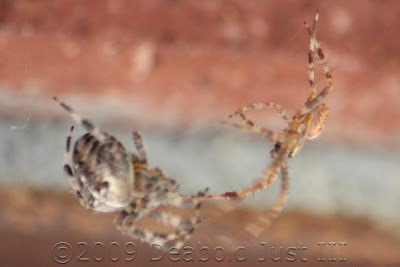 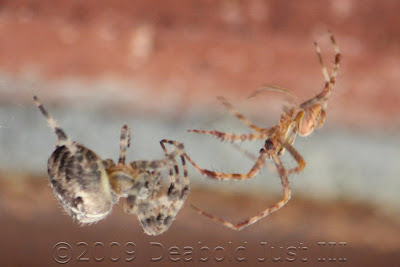 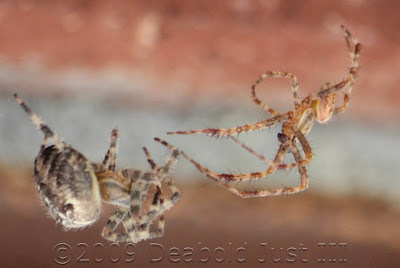 She pulled back quickly and seemed to relax. 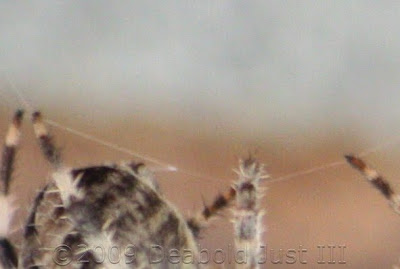 Here you can see how precariously her hangs by the tiny hooks on her feet. 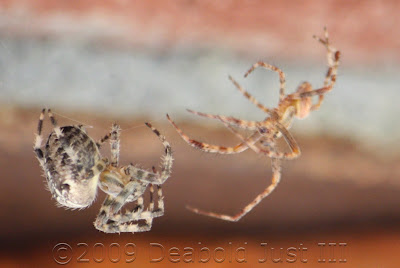 A couple more taps and she exposes her belly. 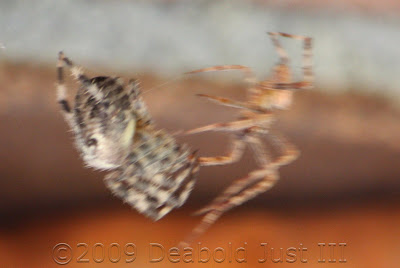 My Camera can take three pictures per second so here you see the whole act of copulation in less then one second. 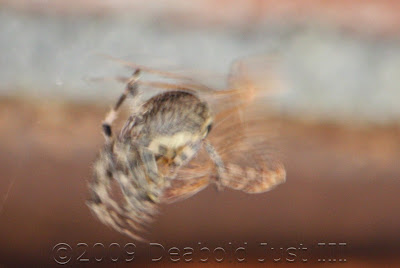 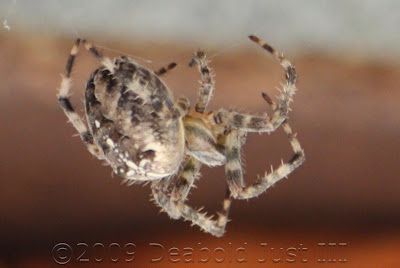 In an instant the Male was gone. I thought he had fallen from the web. I lowered the camera and saw him two feet away running for his life! The Female was moving very slowly toward him. 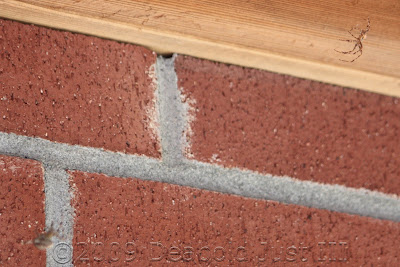 The Male is in the upper right and Female lower left. She seemed to be disorientated or dazed as he took up a distant position to look back and see if it was clear to move on to the next Females web. He has a lot to choose from this year. 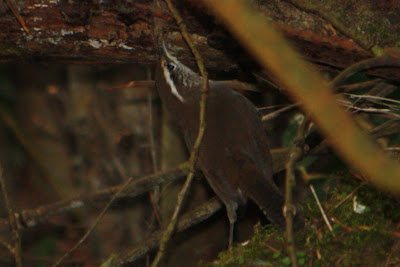 Spiders are a great indicator of the environmental health of a given area. They provide high protein snacks for the birds migrating south as well as those who will be spending the Winter months here. The Bewick's Wrens are sulking through out the Black Berry bushes filling up on them.

I can suppress my spider freak outs for the few weeks they run their cycle. It is a timeless rhythm. Now I am reminded that the next wave of spiders to appear this Fall will be the great big Hobo Wolf looking monsters that invade the house.

I am not a fan of them at all.