As a kid my father and I watched every nature show that was on TV. My father thought Marlin Perkins was a god. He did not think that Marlin's sidekick Jim was very bright. Jim had a tendency to jump on and wrestling every animal he came cross. Anyway, one of the animal shows that captured my imagination as a kid was one that showed the European Cuckoo and how it laid it's eggs in the nests of other birds and never participated in the rearing of their own young. It seemed so exotic, bizarre and far away.

As my experiences with birding expanded over the years I learned of the Brown Headed Cowbird found in the western states of the U.S.A. It has a similar method of leaving it's eggs in the nests of birds of other species to have them raise their offspring. When I moved to Western Washington I found Brown Headed Cowbirds lived here. So began my quest to get a picture of a Brown Headed Cowbird being fed by a host parent.

That was in 1976. Since then I have seen this young Cowbirds being fed by host birds twice but could not get any pictures of it. There is a very short period of time in each birds life where it follows it's parents around begging for food.

Let's shift back in time a couple months from today, a small nondescript Female Common Yellow Throat search the thick cattails of a backwater pond for a perfect nest location. She began to built her beautifully woven nest among the cattails keeping it high enough above the water line to prevent flooding if it rained and low enough to evade prying eyes.

Little did she know she failed. High above a dull colored silent female Brown headed Cowbird watched with infinite patience. She watched every move of the Yellow Throat to and from the nest location and even knew when the Yellow Throat had started laying her eggs. The Cowbird's timing was perfect, she had a narrow time frame between the start of the Yellow Throat's egg laying and the beginning of her incubation period after which there would be no chance to approach the nest undetected.

Evolution had given her an edge, her eggs are generic enough in color and size compared to a variety of possible host birds eggs so her opportunities to find a suitable nest to violate were greatly enhanced. Birds species that fall into the Cowbirds possible "victim" criteria are not always fooled by this slightly larger and slightly differently colored egg. Suspicious or older birds that had experienced this event prior would abandon the nest or build a new one on top of the intrusive egg as well as their own eggs in the nest. By doing this the hosts clutch of eggs are sacrificed.

Given that a Female Brown headed Cowbird will watch several to dozens of nests each breeding season, she and each of her equals find enough opportunities to keep their kinds numbers strong. The tragic down side of this form of parasitic nesting is that for each juvenile Cowbird egg that is discovered or hatches, two to six baby birds of the host are lost.

Yesterday my luck changed. I went of a short walk in the Nisqually Wildlife Refuge. It was overcast and muggy. As I was heading out I heard the begging cries of a young bird in a dense patch of cattails. I waited a few minutes hoping that it would eventually move into the open. Finally when it did expose it's self I thought it was a young Red Winged Blackbird by shape and color but that quickly changed when a few seconds later a Male Common Yellow Throat flew out of the cattails with a bug and taunted the young begging bird. I knew instantly I had found what I had been looking for all these years. I took a series of forty to fifty pictures. Low light and distance prevented the quality I had hoped for but that is how it goes. 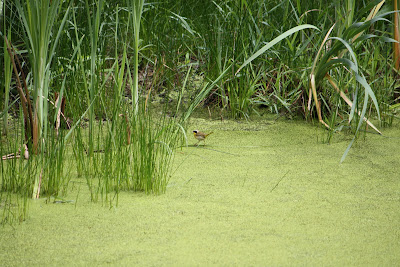 Here a male Common Yellow Throat flies out of the thick cattails calling to the young Brown Headed Cowbird. 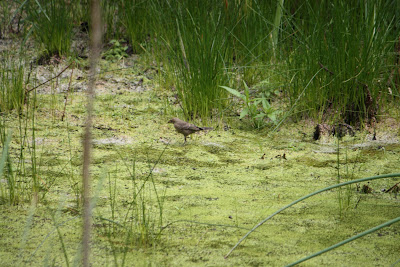 Out comes the Cowbird fledgling. 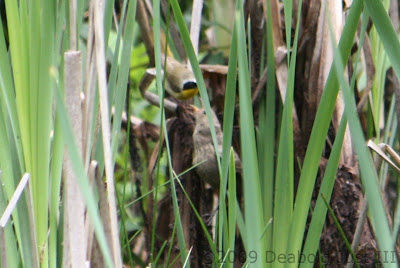 The Male Common Yellow Throat would catch insects and then lead the young Cowbird around in circles making it take to wing in an effort to be fed. 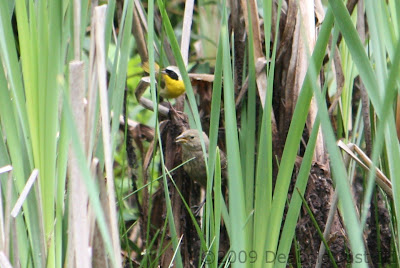 The young Cowbird's size is an indicator of how daunting the task of feeding it is. 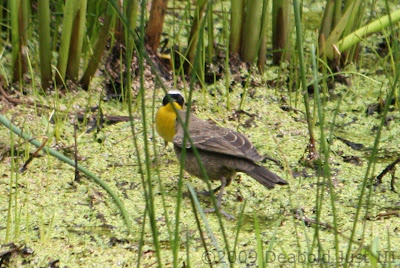 First up high then down low to the Duckweed covered surface of the pond. 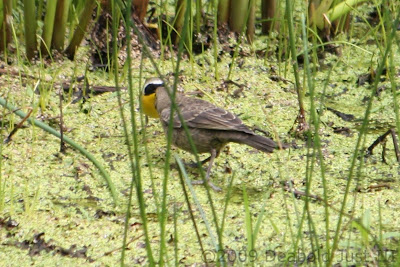 The needs of the one young Cowbird must equal or exceed the needs of the Yellow Throat's own young if they had survived to this point. The Cowbird is relentless in it's need for food. 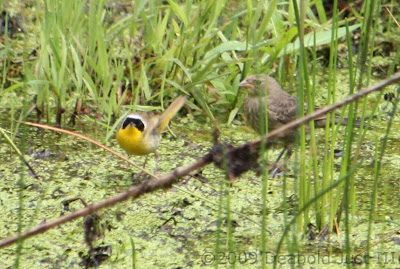 So is the Cowbird a parasite or just smarter then the rest of the birds in it's ecosystem? Does the Common Yellow Throat know it is being used and willingly going along with it? 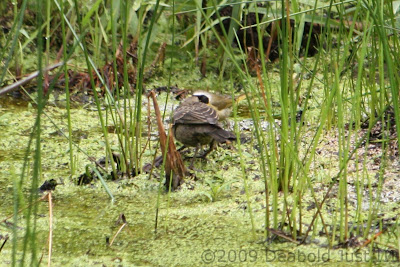 Is the urge to feed a young bird so strong that the Yellow Throat is blind to what is going on? 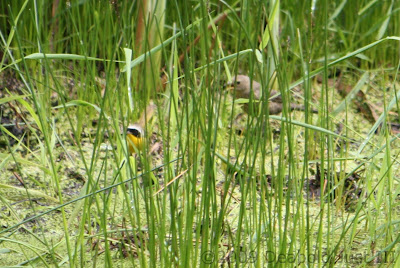 In a few weeks the young Cowbird will fly off and find a flock of others of it's own kind. Some will have been raised by Common Yellow Throats and many others will have been raised by a variety of other bird species. How do all of the young Cowbirds figure out that the are Cowbirds and not what their host parents were? How can they recognize their own kind without ever seeing them? How do they learn their songs to attract a mate to continue this cycle. There are a number of theories as there always are when the answer is as elusive as this.

It is only when we and our ways tip the balance through the things we do that the Cowbirds actions make a greater difference.
Posted by birdmandea at 6:58 PM

OMG this is so beautiful


see you parent all kinds of kids :)

Yeah, I totally agree with your concluding comment. I have never seen a yellow throat. Gorgeous. Amazing photos!

Sometimes I wonder if it is the rounded nature of young animal faces and bodies (I'm not sure what it is technically called, but let's call it the cuteness factor) that overrides other considerations and makes us all pliable to the wills of baby critters . . . here I am speaking of my own experiences raising ducklings. You cannot resist them, even if you know they are tapping your time and energy resources. ;)