Where the Lions roam.

I stopped off at Solo Point on Fort Lewis last week. It was a calm, cool and overcast mid morning. I was there alone. It was one of those rare calms where you could clearly hear the engine of the ferry as it left the Anderson Island slip over three miles away and headed back to Steilacoom. The sound of gravel from the barge loading facility to the South was annoying clear. For years now the sight of the gravel conveyor belt has been a scar on the illusion of isolation here.

Solo Point is an out of sight beach on the South Puget Sound. It is on Fort Lewis even though it can be accessed without having to go through security at one the of the guarded gates, it does still require a Department of Defense sticker on your vehicle to use.

It is mainly used by the Military for water borne operations and training. It is not what you would call a developed location. Three trash cans, two concrete picnic tables , a concrete boat ramp and a port-a-potty does not make for much of a tourist destination. But as they say, location is everything.

Five miles to the South is the mouth of the Nisqually River as well as the Nisqually Wildlife Refuge. Offshore across wide straight is Anderson Island and to the North across a narrower straight is Ketron Island. This part of the Salish Sea reaches over six hundred feet in depth.The currents flowing around Ketron Island as well as the outpouring of the Sequalitchew Creek diversion from Fort Lewis focuses wildlife along this stretch of gravel beach.
There is always some kind of animal activity along this stretch of shoreline, this day had something special in store. 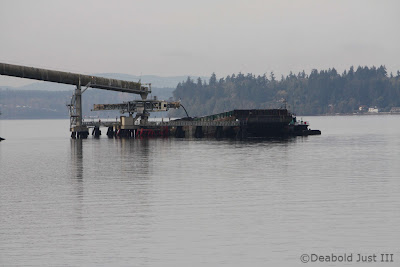 Here a barge is loaded with what the concrete industry calls Steilacoom Gravel. It is of the finest quality and is in high demand for it use where the best must be used. It was deposited at the end of the last Ice Age and is strip mined in DuPont. I can not remember which company is doing the dirty work now, it has changed hands a few times in the last fifteen years. Those who run it now are trying to change the original agreement with all of the local watchdogs so they can STRIP MINE BELOW THE SURFACE OF THE WATER TABLE.
Of course the way they put it is that they would increase the water flow in the original Sequalitchew drainage that historically supported a salmon run thus magically creating salmon habitat. So what is a few thousand gallons an hour being siphoned off of the water table and being flushed out to sea going to hurt? I never really thought of well water as a "habitat" for anything larger then bacteria. 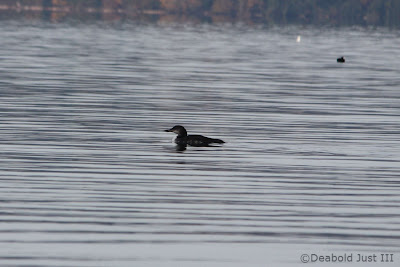 Common Loons winter over in these waters diving down to an artificial reef made from old car tires tied together by a Boy Scout Troop in the 1980's. The reef was placed in the shallows of a small cove and provides shelter for smaller fish that in turn attract larger fish and in turn their predators. 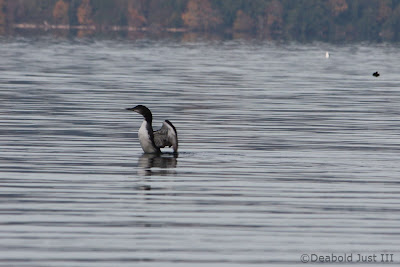 Loons "fly" underwater in pursuit of fish. Keeping their feathers clean and dry takes as much time and effort as they put into feeding themselves. Clear water is essential to them finding their food as they hunt for minutes at a time far below the surface where the sunlight begins to fail to penetrate. 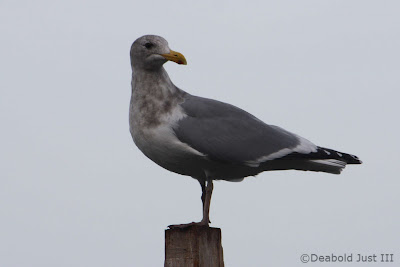 A variety of Gulls live in the area year round. I am not good at identifying gulls and I will not be anytime soon. Many people see gulls, some watch them, I try to "read" them. Gulls are opportunistic feeders and it is pretty much every bird for it's self. There is no cooperation among them unless you call relentlessly chasing some other bird until it drops its food qualifying as cooperation. Anyway, gulls are great sign posts to help in reading what is going on behind the scenes. 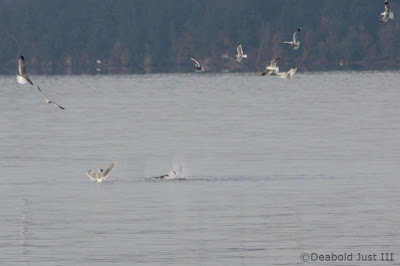 The gull above saw what was going on out past the reef and took off. I tracked ahead of his line of flight and saw there was a "boil" at the surface. An unseen predator had run a school fish to the surface and every gull in the area was converging on the spot to claim its share of the spoils. 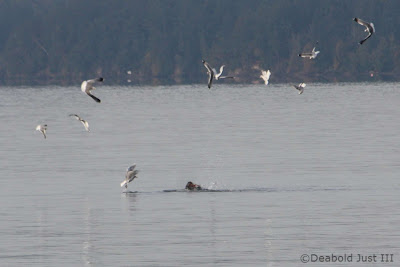 The "boil" disappeared as fast as it formed and one dark shape appeared at the surface. This is the moment your heart races. Is it an Orca, a Harbor Seal, Harbor Porpoise, or will I even have a chance to see it? 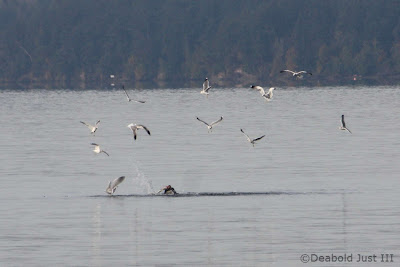 This time it is a Lion. A male California Sea Lion and he had successfully captured a Salmon. Male Sea Lions measure seven to eight feet in length and top out around one thousand pounds. It is astonishing to think that a animal larger than a side by side refrigerator weighing twice as much can hit speeds fast enough and be agile enough to catch a fifteen to twenty pound Salmon with is mouth. 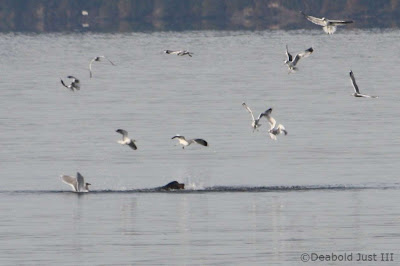 Sea Lions do not use their front flippers to hold their food when the eat. That would raise the question how does one eat a twenty pound salmon while floating around in six hundred feet of water while being harassed by thirty greedy gulls? 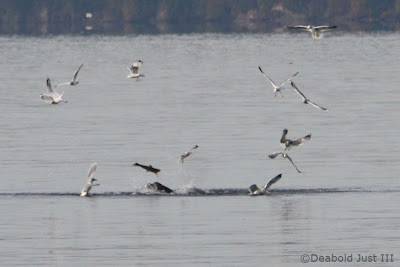 Rather simple. Grab it by the head and give it a little snap. 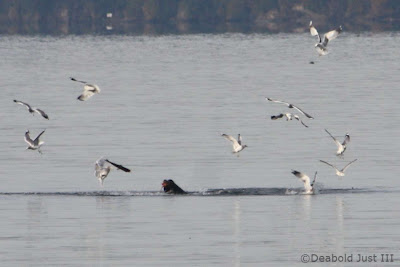 Of course the down side of that is that you are left with a mouth full of cold fish head and your hard earned salmon moving away from you at a high rate of speed.
Some tastes are just acquired. There are hazards too. The gull was just looking to pick up a scrap or two and wound up with the prime cut.

Be careful what you wish for. 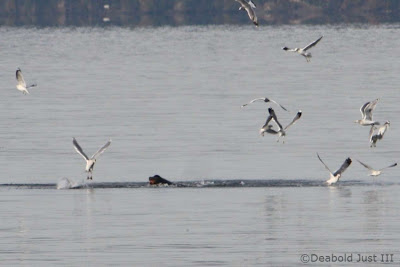 The Sea Lion will eat the choice parts in the good times or will eat everything during hard times cheating the gulls out of everything but the smallest of scrapes. During the salmon runs Sea Lions are known for just eating the eggs of the females and leaving everything else for the scavengers. 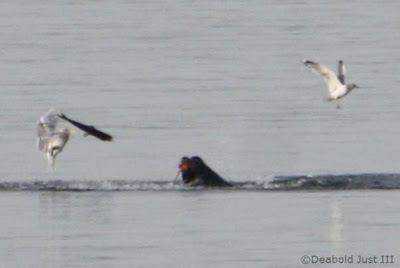 Here is just how close the gull came to getting wiped out!

Seeing this interaction between these animals amazes me to no end. What amazes me even more is that when a sixty pound Black Bear cub wanders into the outskirts of Seattle every news agency in three counties rush to cover the story. Camera crews, graphics, camera phone shots, maps and helicopters all bring the story to us live! Everything from the first over turned garbage can to the Krispy Cream baited trailer mounted trap to the happy ending with a drug addled bear staggering off into the woods in the foothills of the Cascades.

There are nearly one million people living on the edge of the Salish Sea, a lone bear cub eating trash can capture the attention of hundreds of thousands.

Yet when you think of eight foot long, thousand pound wild animal in the Northwest catching wild salmon with it's teeth, living just out of the sight of man,the first animal that would come to the mind for most of those living all around the country is Bigfoot.

Posted by birdmandea at 4:44 PM

Happy Anniversary Deabold Just III
it has been 31 years and I still feel like I am just getting to know you ..and there is just so much to learn!!!

Dea, you should go here and add a button to your blog so people can easily follow you:
http://www.addthis.com/