December 18, 2009
My grandson and I went out bird watching after a major bout of holiday cookie dough preparation for a cookie making party later in the week. He was pretty pumped up on the ingested samples and needed to be set free in the fresh air. I loaded him and the dogs up for a trip to the beach. Of course any time I leave the house with him is a reason to pass by the Eagle nest on the creek. As we approached the creek I could see a birding friend was already there photographing the roosting Great Blue Herons. The Herons have selected the Douglas Firs on the Western bank of the creek to soak up the morning rays. They are directly below the active Eagle nest.  We talked and caught up on our recent birding adventures. The topic turned to Loons. I told him that I had recently seen loons at Solo Point. He pondered this for a moment and we were off to Solo Point.
We pulled up to the waters edge and my car quickly emptied of dogs and grandson. They know the drill. A free run on the beach. My friend and I began to scan the distant Sea Lions with our cameras. As I looked for Loon silhouettes a rush of air pierced the waters surface just yards off shore leaving a column of mist over the back of a whale 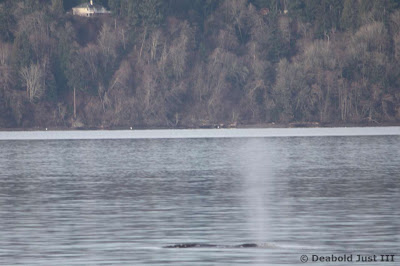 A whale was surfacing for air as it passed. I was stunned. I have seen so few whales I stood there for a few moments forgetting that I had a camera in hand.
And then it was gone.
I called my grandson back over to where we were standing and told him to watch for the whale to come up again. We had no clue as to how far it would go before coming back up. It's direction and speed seemed to be constant for the five breathes it had taken during our first sighting. A few moments later it came up about one hundred yards further along it's course.  Luckily it was still very close. 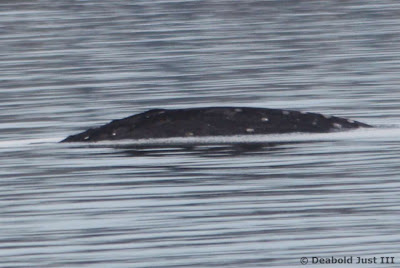 At the time I saw the whale I had no clue as to what kind  it was. After looking at the photos and on line resources my wife and I concluded it was a Gray Whale. My best guess as to it's size....twenty-five to  thirty feet long.  It was moving about walking speed, rather a slow and mellow pace. 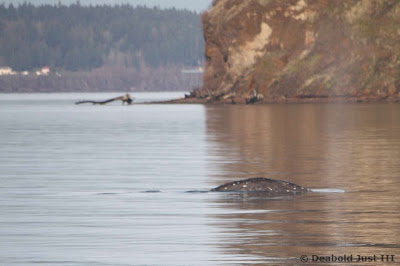 The near land mass in the back ground is the Southern tip of Ketron Island and the far is McNeil Island. As the whale entered the channel between Ketron Island and Solo Point the Sea Lions further out on the gravel barge buoy began to bark wildly. 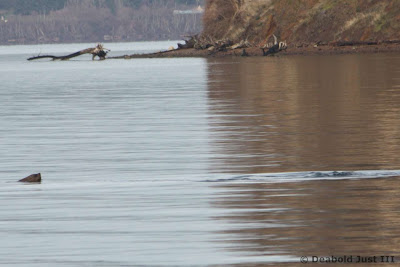 As the whale slipped under the surface for the last time a Sea Lion surface right on it's tail. The Sea Lion snorted when it saw us on the shore, then followed the whale for another hundred yards then turned toward the buoy where the flotilla was still barking.
There were no Loons there that day but it was great!  I called it in to a State Whale Hotline and reported the location and time. I received an e-mail the next day telling me that this whale hade been seen in the area for the week prior. I have been checking their web site and see that a young Gray Whale is still orbiting the lower reaches and islands of the area.
Gray Whales give birth to their young in the Sea of Cortez in Mexico then migrate to Alaskan waters to feed during the Summer. In the Fall as they migrate South back to Mexico some of the offspring from the previous year that have been driven off by their mothers take the inside passage between Vancouver Island and the Canadian mainland. This path is dangerous for the inexperienced juveniles.  The narrow waters and islands of the Southern reaches of the Salish Sea do not lead back to the open ocean. The urge to travel south takes the young whales up to a hundred miles inland. They will not eat until next summer when they go back to Alaska so food is not a problem. They can however waste too much energy finding their way back to the ocean and decrease their odds of surviving their first year along. Not all of them find their way back out.
All we can do is wish them the best and a safe trip.
Posted by birdmandea at 7:40 PM

Wow Dea! That's so cool! What an amazing thing to share with the little man. Wish I could have been there too!