When is a duck not?

Last Sunday I took the dogs to Sequalitchew Lake on Fort Lewis. It is a small lake that does not allow gas motors. Over the past twenty years I have seen a wide variety of wildlife on and around the lake. During the winter storms it offers a safe fresh water refuge just two miles inland from the Solo Point area I have written about recently.
The past few weeks here have been one set of warm storms after another and it will continue for at least ten more going by the weather reports. I wanted to see what was on the lake and hunting over head. Bald Eagles frequent the Trout and Bass filled shallows.
The dogs burned off their energy west of the lake allowing me to slowly drive the gravel road on the south side of the lake. Nothing, nothing, nothing and then suddenly around the next little clearing, nothing. I did see a new beaver lodge which made me mentally review how long it had been since I had been out there. My past few visits found military exercises in this part of the post and the roads closed. With limited access I just stopped going out there about three years ago.
As I came upon the last pull out along the lake I spotted a flock of Canvas-backed ducks on the far bank. I pulled in and let the dogs out for a new sniff. I looked at the ducks for a few seconds and whistled for the dogs and put them back in the car. 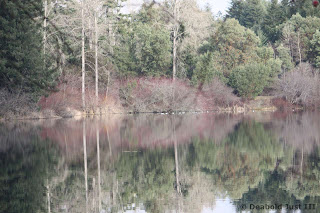 What a beautiful sight. Calm protected waters with food and companionship. Let's imagine we are a duck looking for a place to rest. We'll start with a quick fly by to check out the approach and landing paths. When I say "quick" I mean flying by thirty to fifty miles per hour. A lose orbit puts us on track to land just in front of those Canvasbacks. 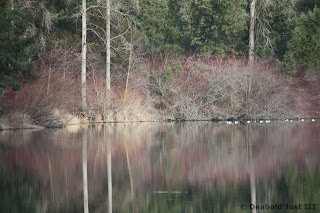 With the landing zone coming up fast it is easy to see the flock of Canvasbacks are a mix of males and females, off to the left a small group of Mallards have separated themselves. The Canvasbacks are divers the feed in deeper water while the Mallards are dabblers and feed from the surface in shallow water.Once we land we can see who is friendlier and hang out with them. 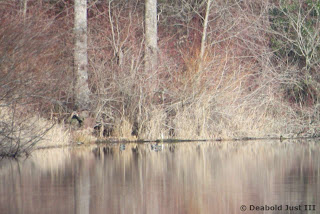 
(If you have not seen the problem by now it is unlikely you would last long as a duck.) 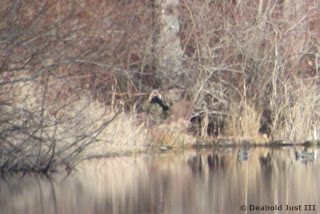 At the base of the tree is a hoop blind with a duck hunter looking back at me with binoculars. If we had been ducks rocketing in he would have been tucked under the netting waiting until we were in range.
A lack of movement when I looked at the Canvasbacks  made me pulled the dogs back to the car. I did not see the hunter until I looked at the pictures.  I am a birder, I have no bitch with the hunter so we cleared out so he can have his turn.
I get them the rest of the year. I think I get the better deal. My season is longer, more inclusive, no bag limit and I can shoot my quarry time after time.
Then go back again tomorrow.