Dam it damn it! 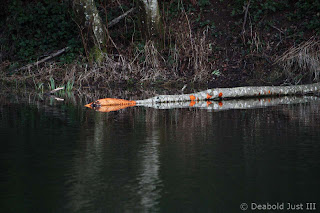 It started out so simple. It appeared to just be a tree that had fallen in the water but I knew when I saw it  I was in trouble, deep trouble. I took this picture then I moved in to see what my chances would be. 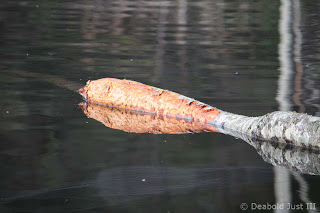 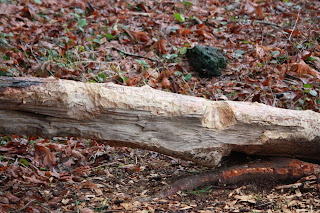 Here is a case of some heavy duty gnawing on a dead tree. There is no food value in this kind of wood but Beavers need to gnaw to keep wearing their massive teeth down. 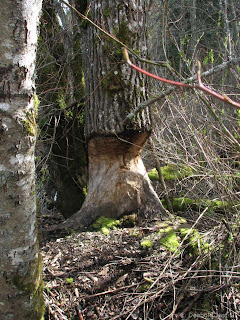 Some of the trees that the beavers are gnawing at deify logic but no one ever said they were logical. 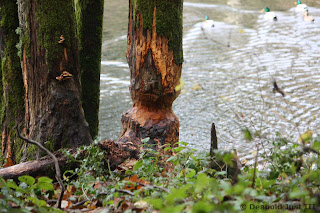 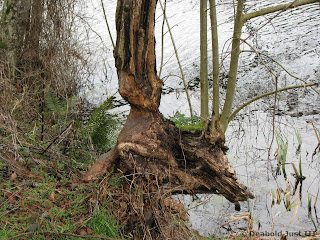 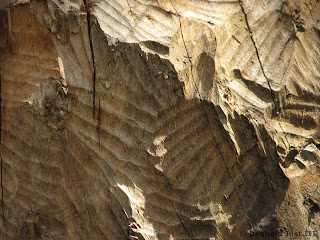 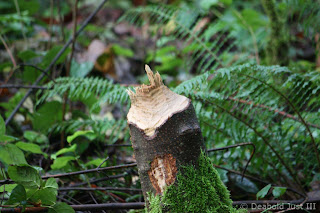 This sapling was an evening meal in it's self. 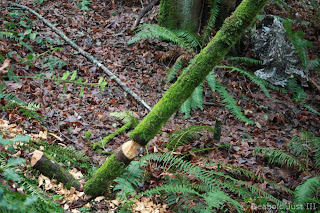 I decided to set up my wildlife camera at what looked like the best location and hope for a picture. My selected target tree was in a risky area, near a trail with dog walkers, fishermen and skim boarders.  I made up a cable so I could padlock the camera and tripod to a tree and leave it there for a few nights. Here you can see it in the top right hand corner of the photo. Notice the Beaver had already chewed this tree down twice and was working on the third. The weight of the tree was being supported by a very large tree blocking it's path to the water. I am sure the Beaver could never see this in the dark while it was gnawing on the tree and as far as it knew it was a new tree each time it started to chew on it. The height of the chewed area gives you a really good idea of the size of the beaver.
An animal of some kind tripped the motion sensor on the remote camera around sunrise for three days in a row but no beaver were photographed making the final chew through. I had to rethink this plan. I wanted a beaver picture and there was no telling when or if ever the beaver was going to come back to this tree. I had to have a beaver picture. I was going to get a beaver picture. 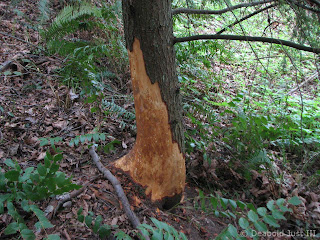 This tree is doomed. The Beaver while deciding how to chew it down took to snaking on the inner bark lining. In the process it girdled the tree cutting off it's food supply and the tree will die. The Beaver may come back at some time in the future,  finish cutting the tree down and use the wood for it's pond or leave it standing. As the tree dies it will be used by other animals for nesting holes and food as insects bore in to it. 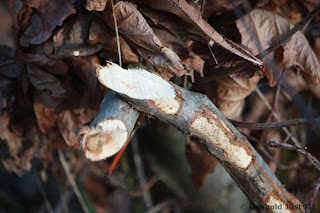 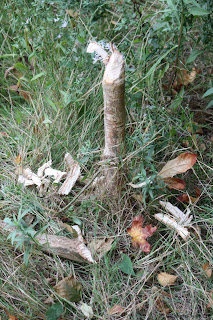 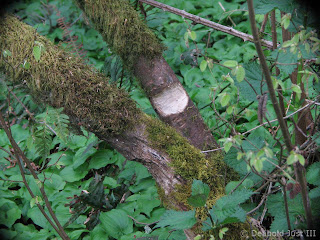 I thought this was a great example of changing times. Beaver come and Beaver go. Here you see where a beaver years ago nibbled at the lower sapling and recently a new beaver came by and tasted the upper. I wonder if it tasted bad and that is why they both stopped where they did?

One afternoon about three weeks after this beaver issue started I had an hour I could steal away on a rare warm sunny early February day. If you follow my Blog you will recall it has been a rather warm month and winter in the “Puget Trough”.  I thought I would try walking  upstream on the side of the creek that does not have a “trail”, yet. I did find that there is an old overgrown path that parallels the creek. It  is littered with fallen trees, trash, beer cans, booze bottles, car tires, washing machines and shot up car bodies.... but it also  show sings of being an active game trail. Surprisingly I found signs of beaver activity about a hundred yards from and over seventy-five feet above the creek.  I stood above the creek and “glasses” the water course below with the binos. Instantly I saw wood chips at the bases of trees and small beaver dam diverting water to create a backwater pool about thirty feet wide and a hundred yards long. 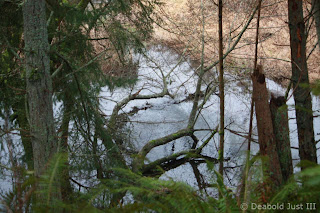 The dam. Water is moving from the top of the photo to the right. The slowed and diverted water is flowing back to the left. I used Goggle Earth to look at the location and saw that in years past the outline of the beaver's pond was clearly defined but there was no water in it. This again would explain what looks like periods of time when the beavers are not active in the area for one reason or another. 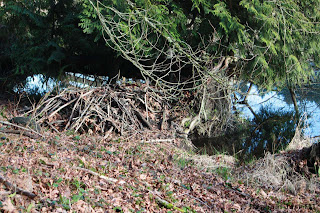 I moved upstream and clear as day in plain sight there it was.  Wrapped around the roots of a downed tree at the waters edge was a mud and stick beaver lodge.

In less than ten minutes on this “trail” I had found the beaver's dam and lodge, this was too good to be true. I sat for a few minutes to let the sounds of the forest settle and blend in. I would like to say off in a the distance a Loon called out or a majestic Elk bugled from a mist covered grove of trees but it did not happen. The trail and the beaver lodge are at the bottom of a steep embankment with a major road crowning the top. Large trucks with their Jake Brakes roaring, speeding crotch rockets and blasting stereos break up the constant whine of care tires above the babbling waters of the beaver dam. Kinda sucks and takes the romance out of it but you have to take what you get.  Rare moments of silence allow the sounds of the Kinglets, Juncos, Crows and Ravens to take their right full place in the unexpected beauty of this place.

As I sat there an immature Bald Eagle flew up the creek drainage, as I tracked it I caught movement below near the lodge. Two Female Hooded Mergansers and a pair of Wood Ducks were on the beaver pond and straining to see if I was still there, they have seen and heard me walking up to the edge and took to cover. The two Hoodies flew off and the two Woodies snuck off.

I worked my way slowly down the embankment through the dried leaf litter and branches as quietly as I could. I was in the Sargent in the U.S. Infantry in my younger years. I have observed many types of game in many environments as well as forty plus years of birding No animal in the world makes the noises a man makes when it walks. All animals know the sound and wild animals react instinctively. I takes a while for things to go back to their natural rhythm after a man passes through.

I stood by the beaver's lodge silently looking for tracks in the mud at the water edge or signs of beaver movement around the plants near what I thought was the lodge’s entrance. As I stood there I heard a muffled comical mumbling sound coming from the lodge, there were one or more beavers in it. I was dumbfounded and quietly started to move away and downstream along the edge of the pond.


I got about twenty yards and I looked back to the lodge. I saw stream of bubbles rising to the surface of the calm pond. 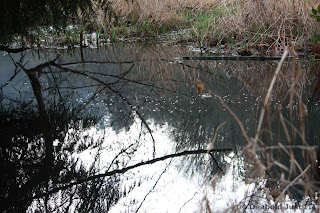 The bubbles reminded me of a SCUBA Diver. The bubbles were coming from the air being squeezed from the beaver's fur since it was dry when it was in the lodge. 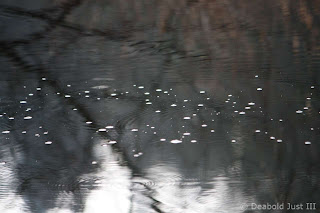 The Beaver passed within feet of where I was sitting but since I was low to the ground the Beaver could not see my silhouette against the sky and did not know of or react to my presence. 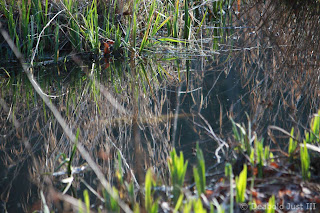 About five feet in front of the rising bubbles columns there was a bulge in the surface of the water with brown shape torpedoing ahead of me down the center line of the pond. 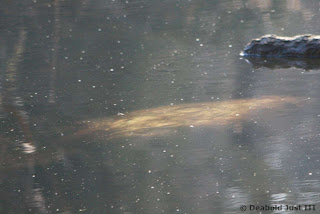 I was shocked to see this and almost forgot to take the picture! 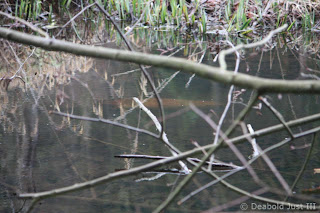 And it kept going.
When the pool opened up the shape disappeared into the depths. I quickly found and jumped to a concealed spot where I could watch the pool and wait to the beaver to surface for air. I did not know how long this would take or where it would take place. It took for ever! My ears rang, my eyes strained and the heart began to race.  I stopped breathing at one point to try to hear better, it really does not work all it could hear clearly was the blood squeaking in arteries in my head.

Just as I thought I was sure I had lost the beaver to some unseen escape route I moved to get my butt out of the wet leaf litter, these are always the choices you regret when watching wildlife. One more quick gaze around may have prevented the following.

The water behind me exploded as the beaver slapped it’s tail as it blasted off to the deeper water again. The beaver had been with feet of me unseen behind a large branch.  I took the moment to jump up to find a new spot with a better field of fire while the beaver was distracted and disoriented below the surface. I learned that in sniper training while in the Infantry.  (I wasn’t really thinking about beavers when I was doing all that army shit but some of it comes in handy when watching animals. Duck and cover...duck and cover.)

I waited knowing I had him/her this time. My cover had been blown. It was him/her or me. One on one. Predator and prey. I had found the sense to set and check the lighting for the camera during all of this. The battery had a full charge the chip was clean. Set to a program that would allow 3.2 frames per second and the focal point was dead center in the lens.This was it, the test, the hunt. To see the beaver was not enough, that would have been a triumph in it self but in all honesty if I could not get the picture to share with you my reader what would the whole point have been? I could just waste your time with stories of glory. Without a picture why bother wasting your time. It's not about me, it's about the animals I want you to experience.

Silently, the beaver's head surface. It surfaced looking directly away from me, the camera came up to my eye and the focus squared up and in one fluid motion I squeezed off the following set of pictures. 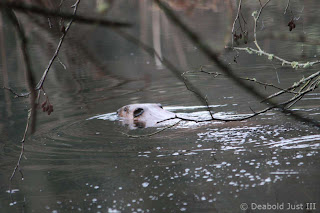 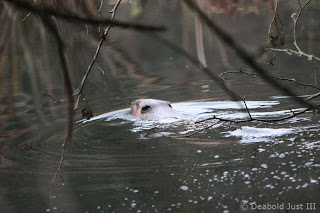 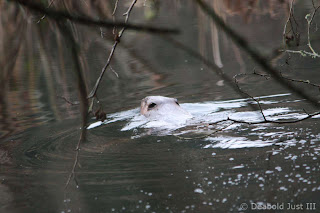 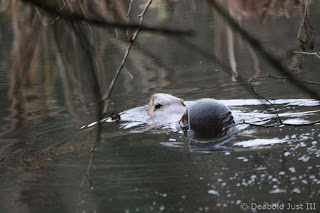 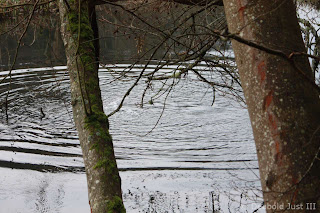 The beaver never saw me but it heard the camera's internal doings and was gone.

Not only do I enjoy your birding photos but your story telling is wonderful...thanks for sharing.

This is just awesome. Waiting for part 2.