“To keep every cog and wheel is the first precaution of intelligent tinkering.”
Aldo Leopold

A few weeks ago I was watching and waiting for a Bald Eagle to lift off it’s perch and swoop down on an unsuspecting fish for a quick meal.  Out over the edge of the water I notice a swarm of insects that were back lit by the morning sun. Our winter had one real cold spell in December then turned very mild. So mild that the Winter Olympics in Vancouver British Columbia just 150 miles north of here does not have enough snow to go around. Snow is being trucked in for the competitions. 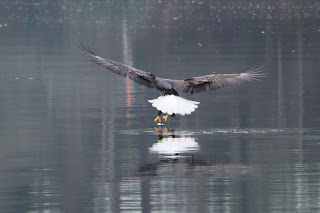 The eagle did go for the fish. As I was walking out of my blind I notice a Ruby Crowned Kinglet was feeding in the branches.  Then it dawned on me, what is the difference?  It is “relatively easy’ to see an Eagle pick off a fish but few see the awesome power and ruthlessness of a Ruby Crowned Kinglet. The Kinglet just lives in a smaller scale then the Eagle.


It is now early February and the temperatures are hovering in the mid fifties each day. Leaves are beginning to emerge a full month sooner then they did two years ago. As the trees warm their saps begin to flow and the whole energy from the sun cycle starts anew.  With the stirring of the tree’s sap the migrations start. Birds eat a variety of food.  The seasons offer up what is available and those birds that do not capitalize on the bounty presented perish. 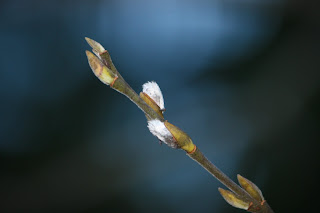 Buds opening on the tree in the yard 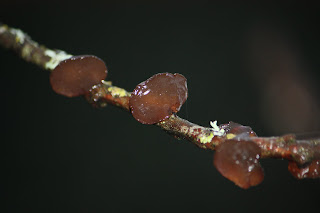 Fungus growing on the twigs that did not survive the winter. 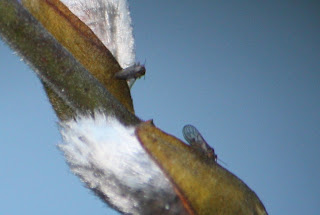 Close up of the sap sucking insects. If you think about it if there are ten of these bugs for every foot of branch and twig per tree that adds up pretty quick. Then think about how many trees in a given area and suddenly you have a bio mass of insects that adds up to tons of food while remaining unseen by us. 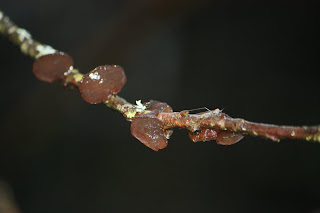 Close up of a larger flying insect. These insects hunker down and hug the branches. This is where they spend the winter hiding in the open waiting for the temperatures to rise enough to revive from their torpor and go out to feed or breed.  Many never get a chance, any one of the birds you are about to meet glean over the branches with sharp eye sight and fast reflexes eating everything in their path. If they did not we would be over run by hundreds of tons of insects. 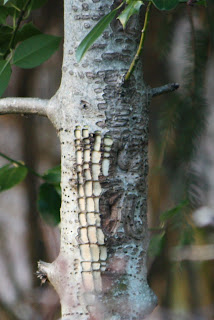 Mystery bark carving. Something is going on here, an animal has a plan and you can see it has worked before. Notice the healed scars to the left and above the fresh rectangles.We will now take a quick look at the usual suspects to find our "vandal". 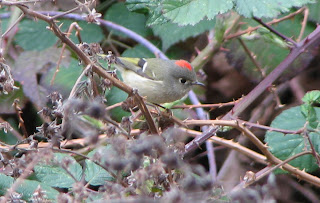 Ruby Crowned Kinglet Male.
Here in the Northwest these birds visit during the Winter searching many different kinds of plants looking for tiny insects. As the weather warms the Males begin to practice their complex songs. In my experience once they start to sing they will be gone within a week or so not to be seen until next Winter. Large numbers will migrate through in a short period of time and getting in a position to photograph them is difficult. They are always on the move and very wary. 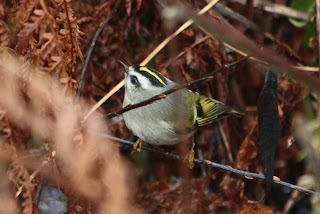 Golden Crowned Kinglet.
A year round resident of the Northwest in Coniferous forests. They are seldom seen due to their size and upper canopy haunts. 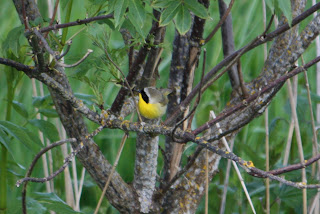 Male Common Yellow Throat.
A migratory bird in the Northwest their arrival is dependent on insect populations being active to survive. 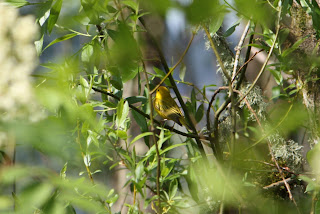 Male Yellow Warbler.
His needs are  similar to those of the Yellow Throat and does not stick around once the insects go dormant. 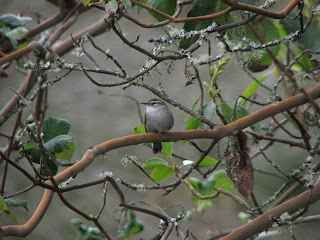 Bewick’s Wren.
This hardy and active little bird is a year round resident.  It is constantly on the search for insects in all types of weather. The Males spring song is so varied and vibrant I have been fooled many times thinking I have found a new species. Intense searching turns up this tiny Wren. It can be disappointing to discover that it is "just" a Bewick's but it is a comforting pleasure to know that they are in the yard. 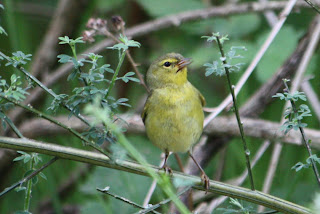 Female Orange Crowned Warbler.
Secretive and shy this Summer visitor searches the dense thickets and branches for tiny insects, when  her young hatch and it takes all she has to keep up with their demands. 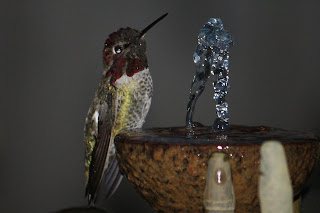 Male Anna’s Hummingbird.
Urban plantings have allowed this species to expand it's range far North of it's historical haunts. In the past twenty years or so it has even begun to Winter over as far North as the Canadian border. When I first heard of January reports of them in Seattle back in the Eighties I thought they were just mistaken. My resident Anna's Hummingbirds not only winter over but actively fight over the fountain in my yard when all local water sources are frozen over. During the periods of below freezing weather there is no nectar or sap to feed on so these tiny birds turn to an all insect diet. When there are no insects to be found they go into a state of torpor or semi hibernation. It is a sleep that some do not wake up from, it is a gamble with high stakes when you do not migrate. This behavior has had some strange results with reports of Female Anna's actually nesting in the Winter months within the city limits of Seattle. 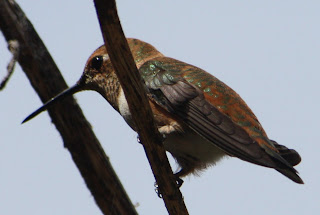 Rufous Hummingbird.
These beautiful little birds migrate from Southern California up to Southern Alaska and back each year. They need fuel for this long migration. Nectar, tree sap and insects are all critical to the ability of these birds to start their journeys. If they travel ahead of their food source or suitable weather they either have to turn back or settle in and go into a torpor until the weather warms. The males move North first and are very active, the females follow but are much more subdued in their travels. 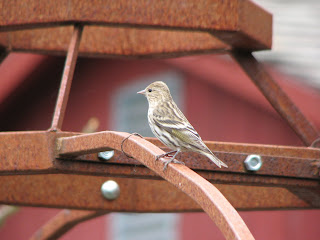 Pine Siskin.
A year round resident they are usually thought of as seed eater which they are. When seeds are hard to find tiny insects fill the needs to survive the cold winter weather.  They cover large areas and there are years when I do not see them for months at a time if at all. 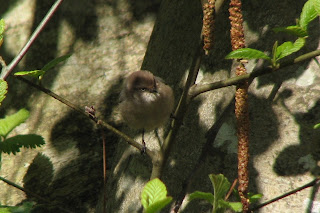 Bushtit
These tiny drab birds are year round residents in my yard. In the winter they flock together in large groups gleaning over the trees in a manner matching that of a military maneuver.  Nothing escapes their sharp eyesight. The Males have black eyes and the Females have yellow eyes. In the spring the large flocks break up into nesting pairs that weave sock shaped nests hidden in the thickets 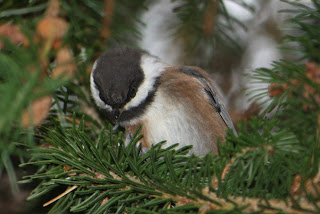 Chestnut Backed Chickadee
A year round resident which depends heavily on insects in coniferous trees. Here you can see the intense focus while looking of food among the needles. 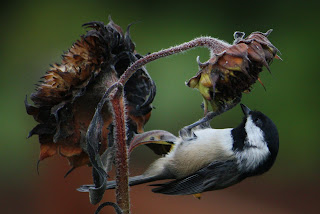 Black Capped Chickadee
More common then the Chestnut Backed Chickadee around my yard but just as dependent on insects.  These spent Sunflowers offer a few missed seeds as well as spider and insects. 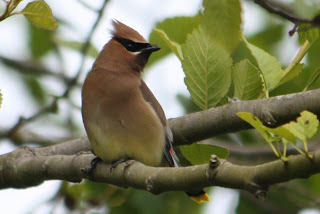 Cedar Waxwing
In the spring the Waxwings move in to the higher branches of the Douglas Firs in the area and build nests. They are easy to see when they fly out from their perch to intercept a flying insect then return. This hunting technique for catching flying insects is called "hawking". A number of bird use this method. 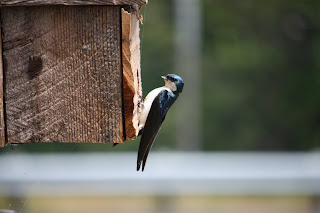 Tree Swallow
A sure sign of spring is when the Swallows return. They require flying insects and do not forage like any of the birds I have talked about so far. 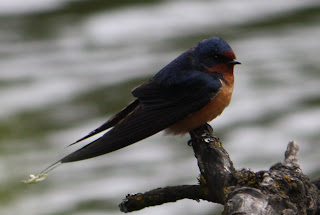 Barn Swallow
Soon after the Tree Swallows are seen the Barn Swallows appear. They too take food on the wing and do not forage, Though I have seen one walk to pick up an injured insect that fell of the front bumper of a car.  This particular Male Barn Swallow has unusual tail additions.  I had posted it on my Flickr page and asked if anyone else had seen a bird like this. I have received over seven hundred and fifty views and not one response to date. 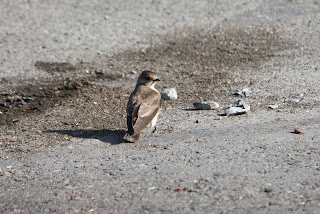 Northern Rough Winged Swallow
Here is another Swallow that many non birders easily overlook. Neither the Male or Female are overly colorful so they just blend into the back ground and are thought to be juveniles of other species. Like the other Swallows they too take insects on the wing. 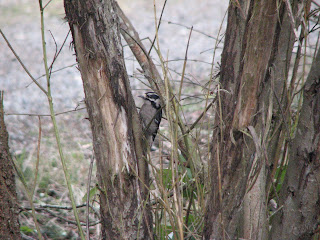 Female Downy Woodpecker
I think everyone can identify with this iconic  little woodpecker.  Shy and secretive Downy's find insects under the bark of damaged and dead wood. The woodpecker here is taking advantage of damage to the tree not caused by a bird. 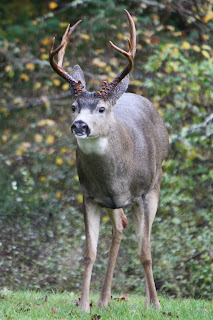 You never know who your friends are. This Black Tailed Buck used the tree to scrape the velvet off of it's antlers when the blood supply stopped flowing to the soft tissues and the calcium began to harden. The damage to the tree is not a concern of the deer but a benefit to the woodpecker
Now back to the source of damage to our first tree. 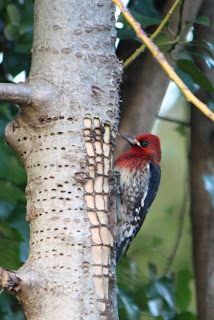 This Sapsucker takes a different and more direct approach to feeding on insects. They shave away the outer layer of bark to allow the sap to pool in the wells they create. Later they return to feed on the sap and insects that have also come to feed on the sap. Many other birds have learned to take advantage to the industrious Sapsucker.  It is believed the Anna's Hummingbird numbers and survival chances are much greater in areas where Sapsuckers are abundant.

From the sunlight creating the sugars in the tree sap to the insects to the tiny foraging birds to the birds and animals that feed on them. The small cog turns the bigger cog slowly then the biggest cog moves infinitesimally.  The cogs and wheels move at their own speeds, infinite in scale both large and small, up and down. Which can you see, global warming, Chickadees feeding or tree sap rising?
I think Mr. Leopold could comprehend all of the cogs and wanted us to just understand that they existed .
I do not think we ever were smart or responsible enough to "tinker" any part and we surly have not by this point in history we have demonstrated "intelligence". We would be hard pressed to show "precaution".
Hell, we have now even shown that we have adult supervision.
On another note,
Happy Lunar New Year!
Year of the Tiger
Happy Valentines Day
Posted by birdmandea at 8:05 PM

This is a swell blog. Did you really take all those great pictures? If so, my hat is off to you. Those are not easy to get.

Hey, I couldn't find an RSS feed button so that I can follow this on Google Reader. Could you go to your settings and add this?