During the recent salmon release over a dozen visiting Bald Eagles were tolerated by the resident nesting pair. Some of the visitors were the offspring of this pair and some were just those that have figured out the timing of the feast laid out before them.
Even with enough fish for every eagle to catch and eat their fill they seem to relish the sport of stealing them from each other.  In some respects stealing fish from one another is actually a display their physical fitness and establishes a hierarchy for future mating opportunities.  Here is just one exchange that lasted only a few seconds but beautifully illustrates their grace and strength. 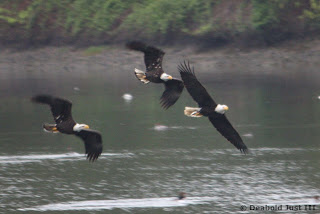 This series of photos started with a small flock of Common Mergansers herding a school of young salmon in to shallow water just ahead of the incoming tide. A "flock" of Bald Eagles lifted up off of the surrounding trees. I do not know how many Eagles make a flock but in one snap shot of time I could count thirteen eagles wheeling around over the fish in the shallows. 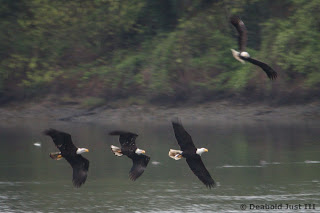 I believe the eagle bottom center is the resident male from the pair nesting in tree line behind these photographs. He swooped down through he firestorm of circling talons and neatly picked up a juicy young salmon. Instantly he was in a "dog fight" for his prize.  Seven of the eagles focused their attention on him and the chase was on. After one tight orbit four of the pursuers lost airspeed and dropped out of the race. About then I remembered that if I did not take any pictures I would not have any pictures. Duh. I missed about two seconds of the chase gawking. 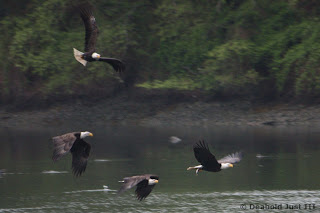 The top eagle tried to cut the corner and close the distance between it's self and the leader but loses airspeed and falls behind. 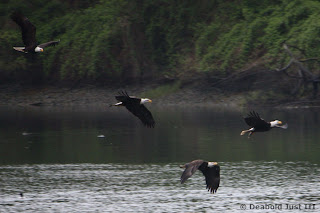 Young eagles appear larger then adult eagles due to their feathers being slightly larger. Think of them as training feathers. There are advantages to this, more surface area equals more speed. The bottom eagle has been moving downward while closing the space between it's self and the prize.  Not having a fish to slow it down allows it just enough of an edge to close the gap. 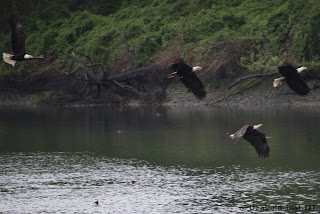 The leader knows he is running out of time and space. The bottom eagle is now in a position to take the fish if the leader does not have the speed to pull away. The number three eagle knows the leader can not go lower so up is the only answer and starts to close that gap. 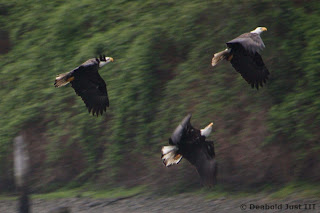 As the leader pulls up he looses airspeed and the trailing bandits know that one of them has a chance if they keep pushing. 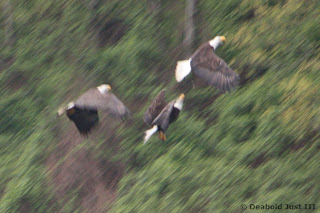 The number two eagle is just inches away from reaching out and taking the fish with it's mouth while the number three is ready to pick it off in the air if number two misses.
A truly amazing feat of aerial skills! 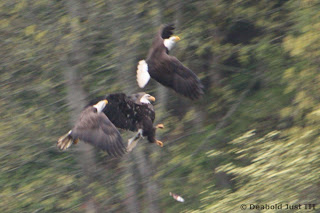 Knowing when to cut your loss is critical.
The leader's choices are limited. He had lost too much airspeed and cannot really afford an injury if the pursuing eagles overshoot the fish and the fish may not really be worth all of this effort to begin with. By dropping the fish suddenly he is of no interest. The number two bird applied the air brake too late to recover the falling fish before it hit the water below. 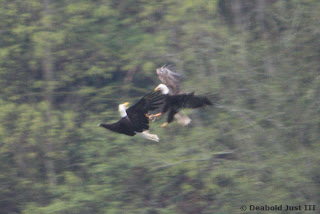 If you can not fly with the big birds, don't leave the perch!
Our leader turns and takes out his frustration on an eagle that was not even in the chase! The number two bird dropped like a rock but could not keep up with the fish.
None of these birds got the fish in the end, it fell back in to the shallows filled with Common Merganser bills that eagerly snapped it up.
This was just one of scores of aerial combat encounters. Some were winners and some were losers. Of course the salmon lost in almost ever case.
Posted by birdmandea at 5:13 PM

THanks for sharing the pictures and the story behind them. I also visit the Chambers Creek area in hopes of catching that special shot of an eagle. It seems you've scored the 1st place ribbon with this series!

Enjoying the fact that I stumbled upon this blog. Great photos! Keep em coming!