First day on the job


Last weekend my wife lovingly planted her baby tomatoes. When she was done she turned and asked "do you think it will freeze this week?". I shrugged it off thinking back to how many Mays of the past twenty or twenty-five Mays that I have been here had frost. Then I thought of how many that were so cold the Bees did not get out to pollinate the fruit trees. Then my mind drifted off the the splendorous few that were idyllic and magical.  I grunted "I don't think so". 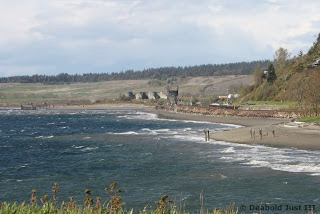 This week the weather quickly went to shit.
The temperatures dropped into the high thirties with wind gust hitting upwards of sixty miles per hour. Snow levels dropped to two thousand feet in the mountains, thunder, lighting, pelting rain sleet, hail and ( I love this one)  deluged rain while the sun was shining on the marble sized hail on the road causing white out conditions WHILE a constant green swirl of leaves freshly stripped from the branches stuck the the car windshield wipers as the windows fogged over. 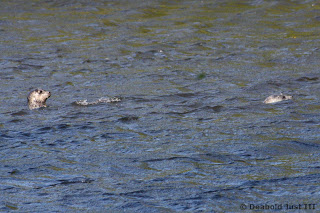 You know when things are bad when the open water Harbor Seals run for cover.
The eagle nest had a good twenty foot sway going before the big winds blew in on Tuesday.  All wildlife was hunkered down and sitting tight.
At some point during this prolonged tempest new eyes opened for the first time.  Last month four pairs of Canada Geese took a calculated risk by building nests and laying eggs. These "early birds" reaped a disappointing success.  Two of the pairs had one gosling each, one pair had tree and the best was a pair with five goslings.  The success rates have been much higher in past years. These ten little goslings as well a few other other surprises were all greeted by the harsh weather. 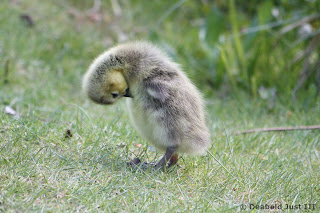 Wasn't there suppose to be a belly button here?
After a prolonged search the said belly button was indeed missing.  S/he was actually instinctively preening after it's first icy cold swim from where the nest was to where food could be found. 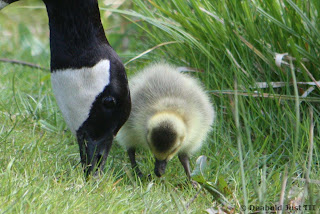 Mother will show you what to eat. 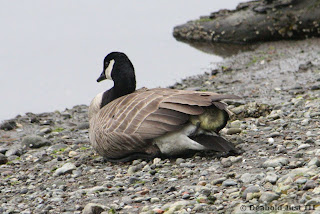 Any port in a storm.
Never was a phrase so literal. Moments after I took this picture a near white out sleet storm and wind gust churned up whitecaps on the tidal waters of the creek and drove both for better cover.
I went to recover the memory card from the remote wildlife camera I have monitoring the Wood Duck nest box at the Beaver pond after the winds died down. The drake was still guarding the pond waters beneath the nest box. While I was taking pictures of him swimming toward me the beaver approached from behind me and I did not see it until it swam into frame. 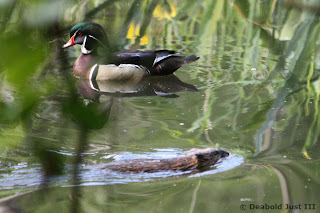 The beaver went about harvesting cattail shoots for breakfast. 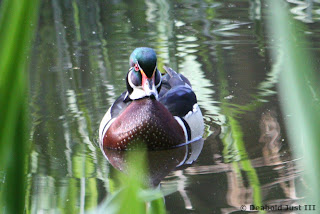 I was well camouflaged and motionless as he approached. In my personal wildlife encounters having a wild wood duck and and a wild beaver swim with in twenty feet of my as I was taking pictures  was moving. 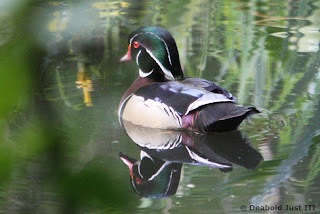 The fade away quartering shot. 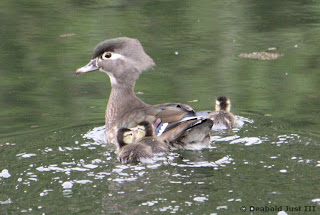 To my surprise another hen Wood Duck had successfully hatched and escorted three young to the main pond near the man made dam. There is no way of knowing how many started the journey. 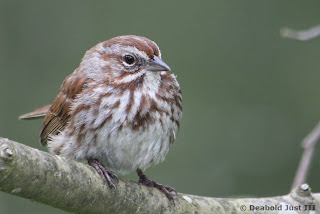 Some of the other creek residents opt for a less risky breeding plan. My new friend here has his territory all staked out and is busy chasing other males away. While watching carefully for intruding males he allowed a number of presumably females to tour the patch of cattails and shrubs he was lording over. He has a plan.
The weather turned around today and was on of those spectacular days I had dreamed of. Winds died down to a breeze and temperatures went up twenty degrees. Giant fluffy Homer Simpson's clouds filled the sky.
The tomatoes were covered and look great.
Posted by birdmandea at 8:40 PM

Oh this is such a wonderful post..
the baby goose is priceless looking for a belly button! and the mama hiding her chick under the butt feathers! just perfect

That's the last time anyone will ask you about the weather!

http://www.telegraph.co.uk/news/worldnews/northamerica/canada/7676300/Worlds-biggest-beaver-dam-can-be-seen-from-space.html
Did you see this. OMG Talk about construction.