In my day to day orbits I am always looking for birding opportunities. A few weeks ago I noticed a female Western Bluebird on a wire near a nesting box that has been on a tree stump for the past twenty years. Each time I pass by the tree I stop for a few moments to see if the Bluebirds are occupying the box. I have not seen any evidence that they are.
A short distance away is a staging area used by the military to offload troops from transport trailers before they march to a near by training area. When I was in the military we lovingly called them “cattle cars”. The truck and trailer traffic on the graveled area has formed a depression on the wood line side where water collects and forms a large puddle during the rains. The puddle is near a road and the wood line but other then for troop movements no one visits the site. Earlier this week I was returning home from a chore orbit and passed by the nest box and again  found nothing. The puddle is on the way back to the hard topped road so it passed by it. Just as I approached the clouds opened up and the sun light blazed down on the flowering Scot’s Broom.
The puddle has been steadily diminishing in size since the weather warmed and the Spring rains have subsided. Amazingly even with  the Northwest being  noted for all of it’s rain when it is not raining water does become scarce quickly.  I stopped a hundred yards short of the puddle and scanned it with my binos. Immediately I saw a male Western Tanager take off from the one of the three smaller pools the puddle had been reduced to.  One second later my foot was on the gas. Being a fairly undisturbed area the birds do not take offense to cars parking near the water. 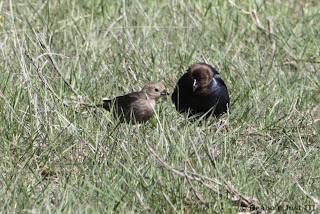 A couple weeks ago I pulled up and watched several Brown-headed Cowbirds feeding which then evolved in to a courtship dances. 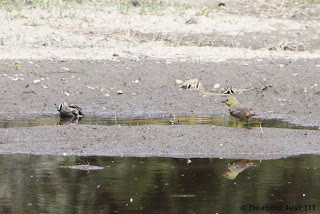 Within moments a female Western Tanager and a male White-crowned Sparrow landed and suddenly took off. 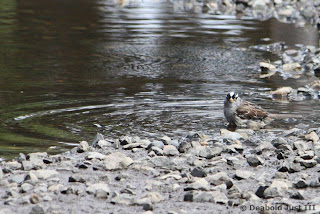 Then the male White Crowned Sparrow came back and abruptly took off.  A male Barn Swallow landed then took off. 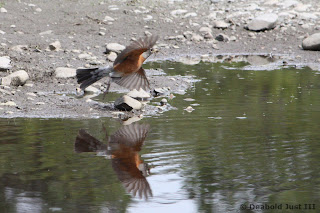 A female Robin landed, gathered a bill full of mud and abruptly took off.  I was beginning to notice a pattern here. 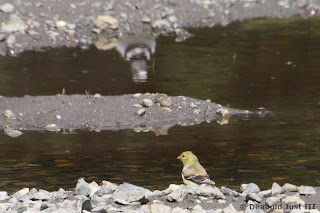 A pair of Goldfinches landed at the waters edge. The ghostly image of the cause of all of the stress at the watering hole suddenly appeared. A Killdeer that had been hiding in plain sight. The killdeer had been silently charging each bird as it landed a the edge of the water. I did not really see it until it lifted up and took wing to drive off the Goldfinches.  I began to worry that I might have unknowingly driven over a Killdeer nest hidden in the gravel.  In my previous visits I had not seen Killdeers at the puddle and had no reason to bring it to mind.
My worries quickly faded when I caught sight of movement on the far side of the smaller puddle.  A Killdeer chick was moving toward the water. In a few moments I found two others and a second adult Killdeer. The second adult Killdeer kept to the edge of the grass while the young approached the water, all the time it was sounding off with a regular “peep”. It would be best described as a rhythmic beacon allowing the chicks to know how far and in with direction the adult was. At this point I made this obvious conclusion, the second adult that was “peeping” was the female and the defender of the water was the male. He was clearing the way for the youngster that his mate was leading to the puddle. 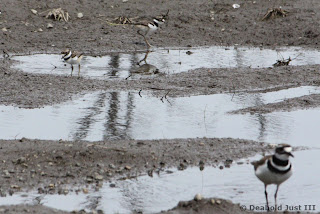 Once the male had complete control of the area the female fell silent. She began to walk directly at while I was sitting in the driver’s seat of my car.
I froze not wanting to cause her to sound an alarm. I found that I was holding my breath as the male began to walk to intercept her about ten feet from my car window. This whole time I was using the camera to cover my face so I slowly moved to a steady position and started taking this series of pictures. 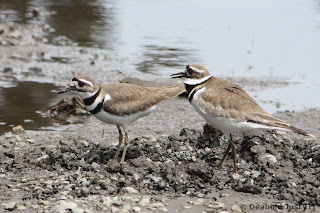 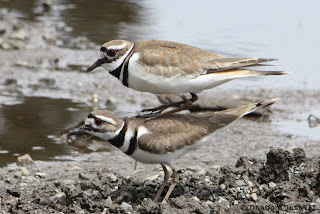 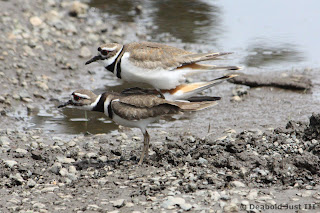 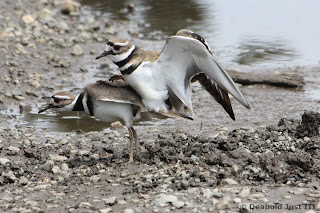 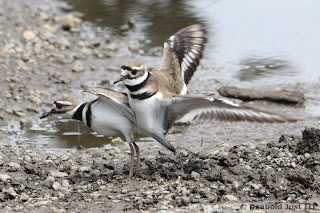 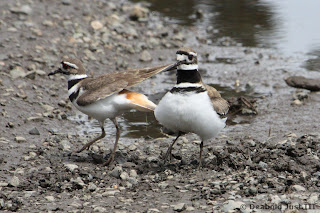 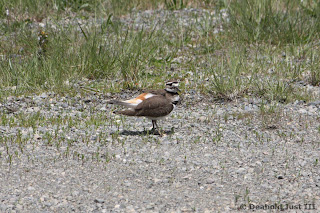 The female moved off and readjusted her feathers. 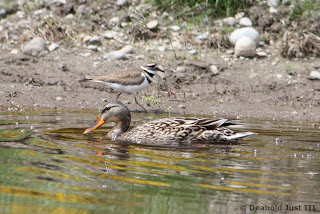 The male move off in the opposite direction to a larger portion of the puddle. A hen Mallard landed and began to feed. When ever the hen neared the edge of the puddle the Killdeer would rush over to it trying to intimidate her and drive her off as he had with all of the other birds. She ignored him. 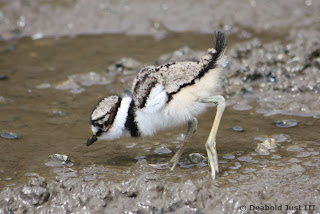 After the adult Killdeer had moved back into the tall grass two of the young Killdeer moved closer to where I was sitting. This one offered my an unprecedented opportunity for close ups. 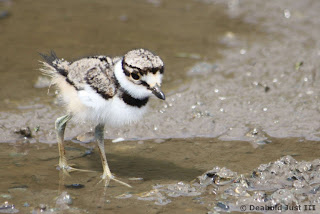 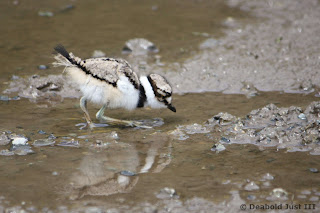 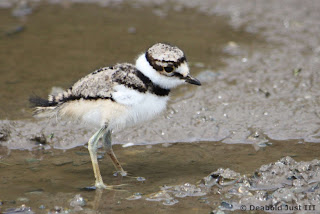 Today it was cold and raining again. I stopped by the puddle to see what was happening. Only the five  Killdeers were there. The instant I got out of the car one of the adults dropped to the ground and pretended to have an injured wing. The other, further away sounded an alarm and the three young birds scattered.

For more photos and a another encounter with Killdeer, I posted a Blog entry back in May of 2008.
It can be seen at;

I love the last line of this post! Awesome blog note again
you are just wonderful!