Very early in my life I knew I was a bird watcher. From the ages of seven to seventeen I could safely say I saw less then fifteen Bald Eagles in the wild. This was in Wisconsin. If someone was going to see an eagle you would have thought Wisconsin would had been a pretty good place to look.  By the time I was twenty three and left the US for Panama for two years I could safely say I had seen less then twenty more bald eagles. During this time period I traveled from coast to coast. Any sighting was noteworthy and some are still vivid.  Sad to say that there were so few.
Times have change and I now live where at any given day if you were to say....take me to an eagle, I could probably find one if not more within four hours on a bad day. This make me happy.
This encounter took place this past April. The local hatchery had released a large number of salmon that were the epicenter of a feeding frenzy.  Over two dozen Bald Eagles had converged offering an unparalleled opportunity to zero in on them. I am sorry if I post to many eagle blogs, I love to see them, I love to photograph them, I love knowing that they are there. 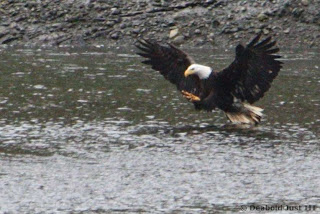 Fish that had been plentiful over the past two weeks were starting to thin out.  As there physiology changed from fresh to salt water they moved out of the intertidal zone for Puget Sound. The eagles were starting to get on each others nerves and squabbles were frequent.
Two weeks ago these birds would drop a fish they had in their talons just to pick up another for fun.
That was not the case today. 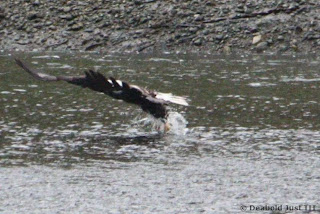 This is the local nesting male bald eagle. He just missed his targeted fish. 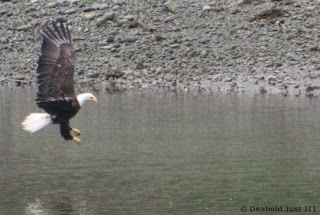 He looked back over his shoulder as he lifted up and circled back sharply.  On his initial approach had hit the fish and stunned it leaving it to linger near the surface. 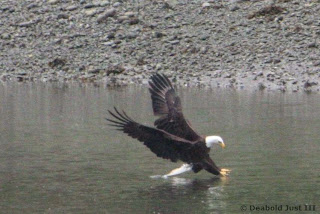 He locked his wings and plunged into the water at a steep angle more like an Osprey then an eagle. 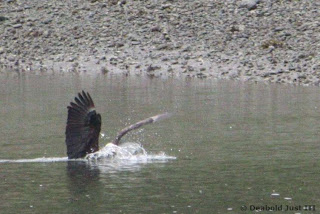 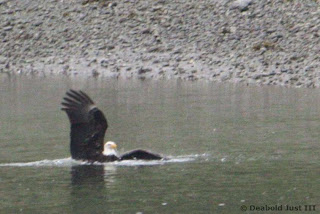 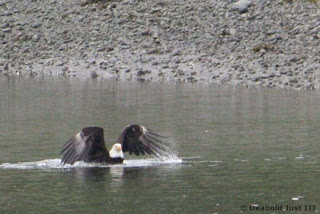 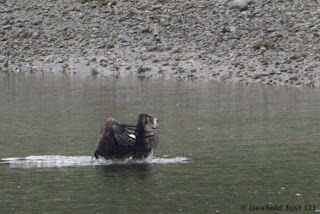 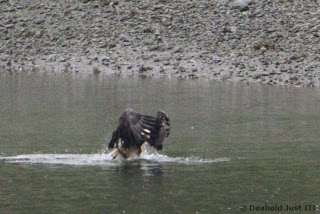 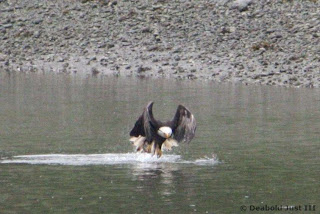 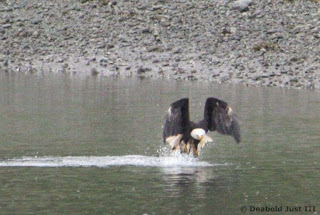 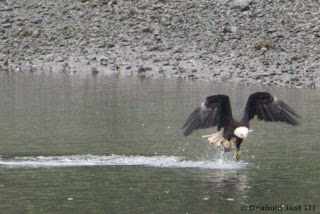 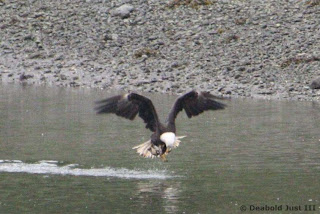 Like an Osprey he pours on raw power and lifts effortlessly pulls himself and the fish out of the water.
I love how it looks as if he looking down at the fish to see if it is really there. 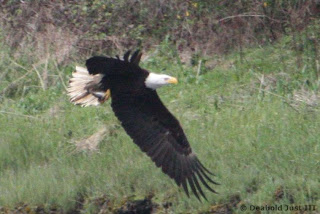 I had seen seven eagles in the trees ringing this little arena.  One of them is his mate.
I am not clued into exactly what a female eagle is looking for in a mate but I would say that that little maneuver will sure look good on his resume.
Posted by birdmandea at 6:16 AM

magnificant!!!! you always amazing me :)

Wonderful captures!!! I could never see too many eagle photos. We used to see eagles fairly frequently at our place in Rochester but now that we have moved to the Centralia-Chehalis area, I don't see as many. Miss them but make up for it with the many Osprey we see while in Montana.