Last Spring I stopped by Titlow Park in Tacoma, Washington. The fall before I had seen an Eurasian Wigeon Drake and was hoping for better pictures then I had taken in the past.  I found and focused in on the Wigeons on the pond which became a large part my blog “Who’s the Daddy”.   In this chapter I photographed  not only an  Eurasian Wigeon Drake but also a Hybrid American X Eurasian Wigeon Drake.
http://birdmandea.blogspot.com/2010/01/whos-daddy.html
During that outing I took pictures of all of the birds in the small pond so I could get an overview of the Wigeon population to see if there were any female Eurasian Wigeons in the flock.  I did not find any females that I could say for sure one way or the other they were Eurasian.  I did find a strange Drake Mallard. It stayed away from the rest of the Mallards on the pond. At first I thought it was a young Drake in some type of transitional phase but also noticed that none of the other Mallards look like that. I was very excited about the whole Wigeon discovery I figured I would figure it out later.  I made a folder called "Odd Mallard" and put the pictures in it. I would drop by from time to time to compare it to other mallard photos to figure out why it was different but the same. 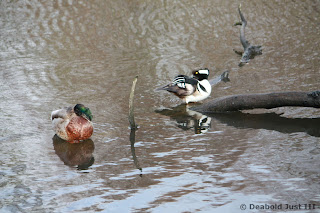 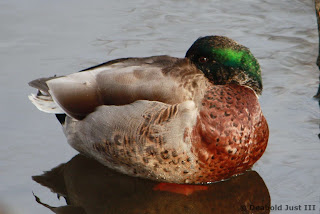 Over the following months I looked very closely at every single Mallard and Wigeon picture I have. Then I did it again.  No other Mallard looked like that.

This past week an errand took me near Titlow at mid day and the Sun was shining bright. This is one of those moments like I mentioned in my last blog entry that I can not let slip by. I wanted to see if the Eurasian Wigeon or the hybrid  had returned this Fall. I scanned the birds on the small pond and quickly saw there was no sign of either of them.

The strange Mallard was there. I zeroed in on him and took the following photos. 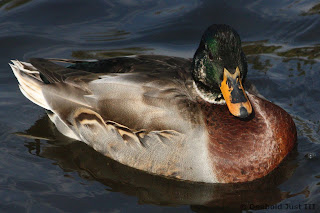 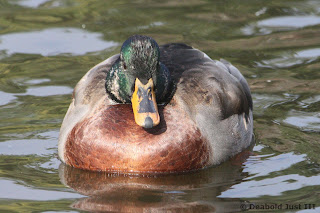 When I looked them over later that day I started to notice head shape irregularities.   The pattern on the head started to look like he might be a Mallard x American Wigeon. 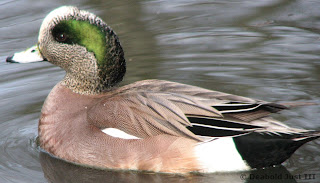 A typical American Wigeon Drake
I could not explain the female looking feathers on the flanks but I thought the head pattern was very Wigeon like and the body feather coloration was effected by the mixing of genes.
I went online and started to look for photographs of Mallards X Wigeon hybrids.  Surprisingly I found quit a few. Mostly killed by hunters. The photos did show a wide range of possible color variations.
So this is about where I went off the rails.   Damn internet.
I gathered up and cropped the pictures for this collage to support my “discovery”. 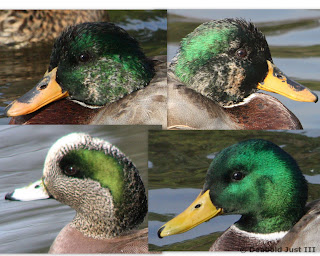 I posted this picture on my Flickr page so I could add it to the Hybrid Bird Group to see I could get feedback to see if I was right.  Even before I could get the head collage up loaded a local birder and wildlife photographer who kindly comments on my photographs did so on the first one.  She questioned if the bird could have looked the way it does due to age.  I had thought of that the first time I saw it and then again when I saw the duck the second time.  I was leaning toward thought that he was an older bird.  When I headed down the hybrid path I forgot all about a chance it was a pure Mallard and it's age being a factor in it's feather coloration.

This morning coffee in hand I light the old Flickr page and I was rather shocked to learn that the wizened ones in the Hybrid Bird Group informed me that this in as “Inter-sex” Mallard.
It is clear this duck was odd. I guess I focused in on the head pattern and called it wrong. In a nutshell low estrogen in a female duck causes them to developed male feathers. Male feathers are the "default" setting.  Normal female Estrogen levels provide the characteristic brown camouflage pattern we are all familiar with.

I will admit I may have made an assumption here far beyond what I should have.  I have always seen the Mallards on this small pond with Wigeons. I assumed that if I had already found a hybrid at this site why could I not possibly see another. The head pattern may have been coincidental and I filled in the rest as I went along.
I love it. That is what keeps birding fresh for me.  Finding something new, something rare or something totally unexpected in the middle of a park when hundreds of people visit a week.  This bird has been sitting there along.  If I had not taken the picture I would have surly forgotten the minor details that made the difference in the identification, blown it off and never known.
Here are the links to the comments and Flickr pages mentioned above.
Flikr Hybrid Birds Group
http://www.flickr.com/groups/hybridbirds/
Comments on the head shot collage on Flickr
http://www.flickr.com/photos/25348030@N07/5232939881/
Comments of the Inter Sex Mallard photos on Flickr
http://www.flickr.com/photos/25348030@N07/5232875527/in/photostream/
Have fun and take care!

Posted by birdmandea at 8:36 PM

Cool...I really must get back on Flickr..........always love your "discussions" here on your blog. It IS easy to see what you want to see sometimes...I did that last year with a bird siting here in Centralia...got blasted by a couple of people on Flickr...but that's ok...I got the answer I was looking for and I was wrong. Ah well, I'm still new at this birding adventurd.

I am so amazed by this duck it really helped to read the blog and understand what you had shown me a bit better ..wow this is a score! good for you Dea!!!

Great pictures, Dea! I've been doing some reading on a few potential sites to visit when you arrive:

I'm hoping to locate information on the nesting site of our local Bald Eagles, as I understand that they are not too far from our house here. I saw one flying overhead the other day, so that very well may be the case :-)

Interesting. I am curious how eclipse plumage/molt was ruled out? This photo was taken in the fall, right?