Last week we took a drive.  Sporadic flooding and poor weather limited directions we could go and enjoy the day. We took our chances and made the plan as we went along. At some point in the day we ended up at a small derelict county park on the Northeastern corner of the Olympic Peninsula.   We had been there twenty years ago and I remembered clearly this spot was great for Black Turnstones, Northern Pintails and Black Brants.  A gravel spit pushes up at the mouth of a narrow passage between two islands.
Successive storms have made a series of gravel steps forming a natural dam that captures the high tide forming a lagoon. As the tide recedes the lagoon drains via a narrow steep sided stream winding through the gravel and driftwood. 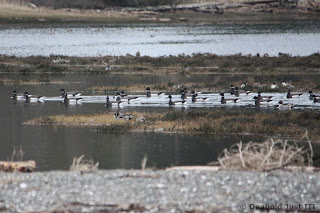 On the seaside of the lagoon a mixed flock of twenty-five Norther Pintails and  twenty Black Brants was feeding and resting in the shallow pools at the edge of the spit. The sun was low in the overcast sky directly behind the mixed flock making good photographs out of the question but that never stopped me from shooting up a couple hundred pictures to erase later that same night. 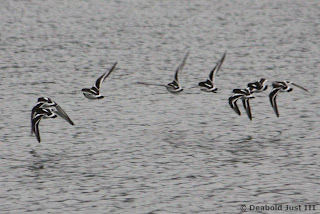 As we walked out on to the spit the wind picked up and a biting rain started to come head on.  We kept going knowing ( hoping) that it might pass as quickly as it started.   Along the break water we found the Black Turnstones I had hoped to see, their camouflage gave them the advantage and they saw us long before we saw them. 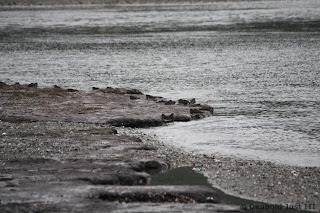 Of course here they are out in the open a few moments later. Do you see them? 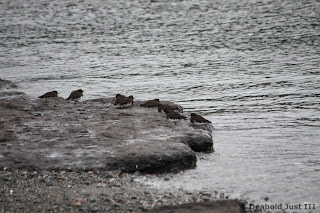 How about now? Not much to see. 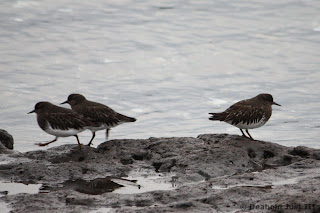 The Turnstones paid little attention to us as we passed them. The relaxed gulls began to stir and a scream. I lowered my camera and took a look around. The Turnstones took off out over open water. My eyes followed them out until my line of sight was interrupted by a lone Bald Eagle approaching us fast and low to water. 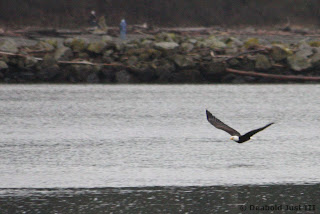 Nothing looked out of place at first. It is not uncommon to see Bald Eagles flying low over open water.  But still something was different. If my eye had not been drawn there I would have never seen it coming. 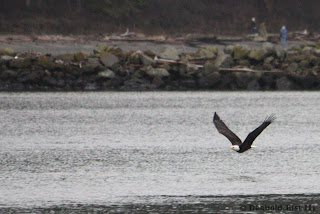 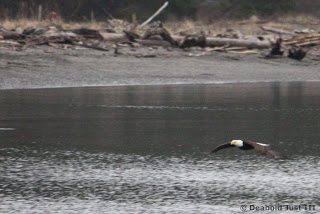 As the Eagle got closer it's speed and wing beat increased. 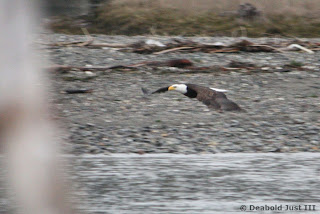 It seemed as if the Eagle got to a predetermined point and then really poured on the speed. With all of this speed the Eagle was still  not gaining any altitude. 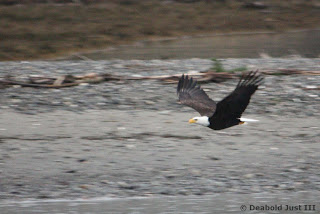 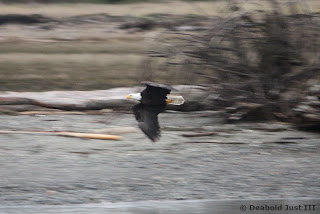 With a few slight maneuvers suddenly the Eagle started to look like a falcon in it's flight.  Where the eagle was going was no longer a question. 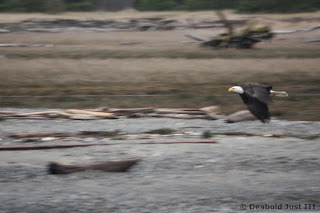 Now thirty yards from the flock which is still not aware of it's approach as of yet. The the Eagle crested the rim of the gravel spit and successfully caught the mixed flock sitting flat ass on the water.

The next two seconds went on forever.  Following the eagle over the bar and into the flock, I ended up looking directly into a sliver break in the heavy cloud cover ( lens stretched out to 250mm) temporarily blinding me. Lowering the camera to recover and relocate the eagle,  I could see nothing except a mushroom clouds of birds and water rising up from the lagoon back  lit by a silver shaft of light..
I search frantically for what I thought would be an Eagle standing over a kill or possible flying off its score. But ducks, geese and gulls had exploded in every conceivable direction, trailing water from the bodies as they took off for anywhere but where they were! 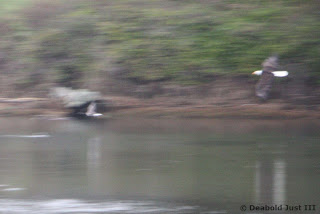 I  finally spotted the eagle flying directly away from the flock's former location low to the water. I brought the camera up to eye level and started to shoot. As I did the eagle turned to the left. I could see that the Eagle was still moving at high speed but I could not see anything as the camera struggled to focus.

Side note on the photo above. All I did to it was crop. The poor light and high speed pan to the left caused the pastel effect. 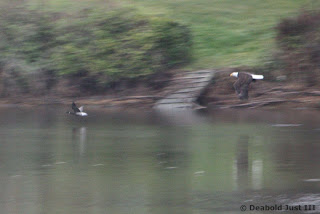 Then I saw the Brant. 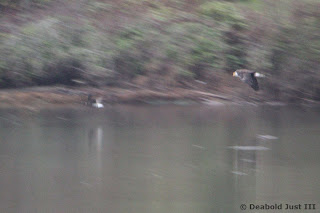 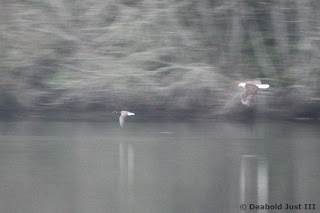 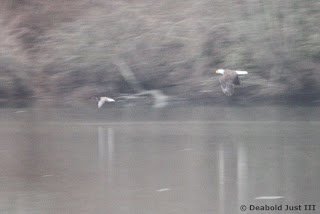 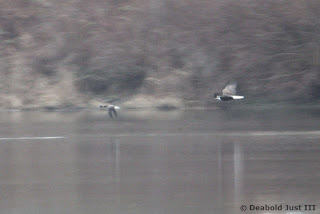 The Eagle was slowly closing the gap with each powerful wing beat. Gradually the gain slowed until their speeds matched. The goose stayed low using the the surface of the water to help compress the air beneath it's wings and gain speed. The Eagle gradually lost speed and struggled to maintain altitude. A moment after this the Eagle dropped down to the goose's level. The instant the goose and eagle matched speed, the goose shot upward and banked hard to the left. The Eagle was spent and simply could not match the maneuver.  The eagle's wing beat and speed slowed as it just kept on going and flew off out of sight. 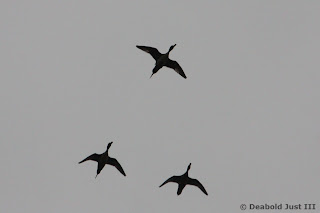 The sky was filled with waterfowl and gulls all moving in different directions. A few moments later scattered birds started to gather up into small groups which then joined other of their own kind. Within minute the Pintails were headed back to the shallow water on the spit but the Brants as a whole kept on going off toward the setting sun.

One was probably a little more winded then the others.

The light was fading and the rain was getting colder and harder to face...time to go home.
Posted by birdmandea at 7:44 AM

my heart is pounding all I can say is anyone reading this post it was so impressive to see this drama play out!!!

I was not sure who I was voting for ..the eagle getting a nice lunch or the brant making its escape!

Beautifully written...I was right there with you, watching the chase play out...Thanks for sharing.

I was praying for the geese!

PS Anon is me, Jody