Last month my laptop did something I have never had a computer do. It was full. Full full.  Not one more thing could be added.  Not one thing.  Foolishly I thought the day would never come. I set about deleting duplicate photos. I figured that was where the most fat was.  I was correct.  Quickly I dropped 41G.  I wish other things were that easy to lose.
One advantage to this was that I found a folder that contained the pictures I would like to share with you.  My last Blog was a graphic fight for life encounter between an eagle and a brant. The eagle is the apex predator of it’s world, the brant, big game in ever sense of the word.   This struggle goes one every day and sometimes it goes on right under foot. 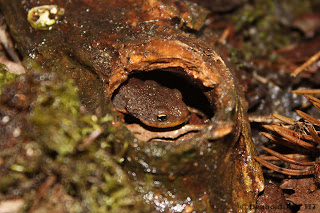 This is a year round resident of my backyard.  S/he is a Rough Skinned Newt ( Taricha granulosa).
These pictures were taken in October, 2008.  I stumbled upon him as I was moving dirt near my fountain. I dropped the shovel and picked up the ever near by camera.  I do not know it's gender, so to make it easier on me to write this, he will be male. The next will be female. 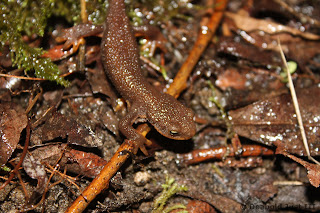 I don't see his kind very often so I didn’t know much about them at the time I took these pictures.  What ever opinion I may have had of them before this encounter changed just as quickly as I took the pictures. 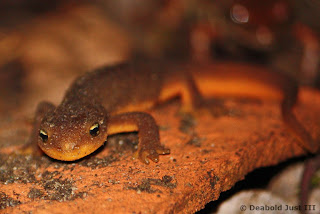 On the prowl. In the first two photos you can't see the orange undersides. With the newt's coloration blending into and between the browns of the ground litter and the orange of the broken pot shards, he is for all intents and purposes invisible to his prey and those who would do him harm. He fears very few predators, he has a surprise for any animal that may want to eat him.  His orange coloration may give some warning to any predator that has color vision, but those with simpler eyes have to learn the hard way.  He is packing a powerful poison. His kind manufacture a chemical called Tetrodotoxin, in the vernacular of the local peasantry, "zombie powder".  As the name implies it is the source of your average day to day Voodoo type of zombie. It is found marine animals around the world, most commonly in puffer fish , a few crabs, rare octopus and it is the poison of choice in Central American frogs.

It is a powerful neurotoxin that has no antidote. It depolarizes nerve cells preventing commands from the brain reaching organs and muscles causing paralysis and / or death. In some areas select species of Garter Snake are not effected by this toxin which would suggest a long running co-evolution between the two.  A classic and timeless arms race. But how and why such a powerful toxin?

Really, have you ever seen or
heard of a zombie movie plot that ever really went well?
Years ago I had a tough little Chihuahua. In her prime she feared nothing and was a adventurous explorer.  One rainy night as we walked we came upon a newt slowly crossing a cold asphalt road. Before I could react she chomped down.  An instant later the newt was back on the road drenched in dog saliva. She never approached a newt again.  I know she could not see color under the conditions that night but she never forgot the shape, taste, smell and gait of the newt.

As a survival strategy a few newts may die but the effects they have on their predators (that survive) ensures that many are spared. 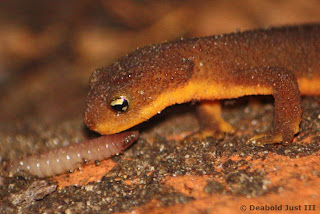 There have been times in my life when I have thought to myself, “Hmm I could really use an earthworm right about now” but this time one actually appeared. 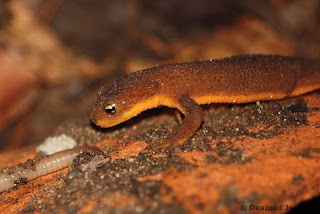 Upon seeing the worm the newt froze and stood motionless for a long time. The worm kept cautiously advancing.  Half of an inch forward and a quarter of an inch back. The first light tough between the worm and newt caused the worm to pull back a little then stop. Both froze. 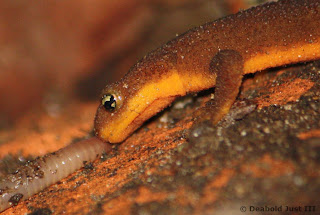 He then touched the worm. 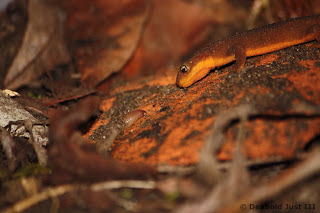 The worm recoiled violently. The worm  knew now that it was in trouble and was not wasting any time in going back the way it had come. 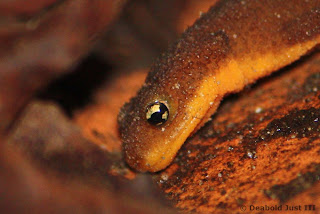 "Eye of newt, and toe of frog,".   Macbeth's witch may have been onto something.
I am struck by the eye, it's proportion to the head as well as it looking differently from what we normally encounter, it looks as if the eyes are connected directly to the spine with the brain being rather rudimentary. The newt took up the chase and slowly followed with calculating steps. 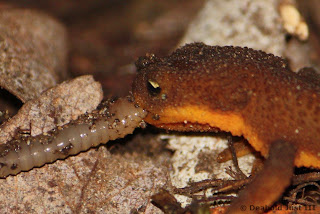 Then he pounced which was surprisingly fast and well aimed.  It was on, these pictures do not do justice the violent thrashing the nest endured. The worm used it's serpentine grip on the soil to leverage the newt's head and body as the newt relied on it's legs and tail to counter each of the worm's assaults. 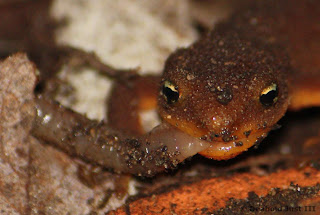 The newt had a mouthful but that was all.
If he had teeth they weren't very large.  The jaw has matching bony ridges that meet to form a vise like grip.  The jaw is driven by powerful muscles that barely have the strength to open but it's not about how fast or forcefully you open your mouth as a predator it's all about the closing and holding on. 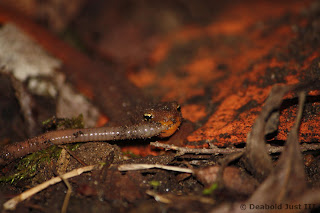 As the worm thrashed about it slowly lost it's own grip on the soil and leaf litter. The newt's wide leg stance and tail swinging to counter the force of the worm had turned the table. The worm now just thrashed about in the air and on top of the newt helpless. 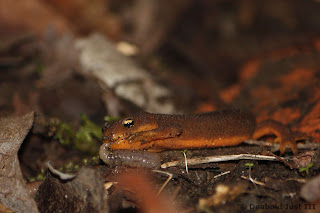 The newt now had not only the upper hand, he hand a hand, two actually. 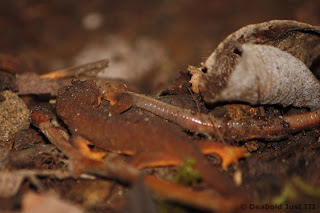 I sure that even by the simplest of evolutionary theory, a newt is not very advanced. Granted the poison thing is a pretty neat trick but otherwise he is not very complicated. His feet barely look as if they are completely formed, he is not fast, he doesn't dig, no really big teeth, no armor or scales for protection.  And if all of this was not enough to make his life tough, he is cold blooded.  If the temperature drops while he is out in the open and unprotected he just stops mid stride and waits helplessly until he warms up enough to move again.  The cold blooded issue for all of the possible shortcomings it has looking at it from a mammals point of view really is a blessing in disguise. His food requirements are minimal.  Without the need to burn calories to warm up,  food reserves last longer. 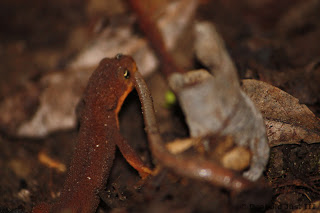 Then his slow moving gait and defensive stance gave way as he transformed into a worm wrestling dynamo.  All muscles strained to control the worm as the stubby little foot stepped on the worm near the newt's mouth. At first it looked as if the newt was wiping the dirt off of the worm before tried to take a larger bite.  As he repositioned himself  it became clear that the feet were increasing the leverage and pressure on the worm at the newt's jaw. 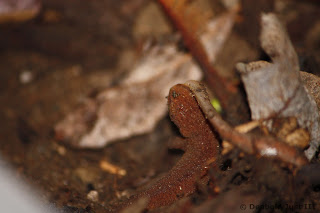 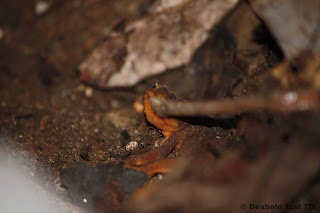 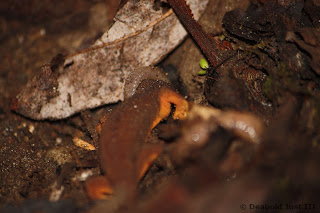 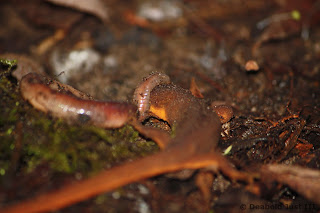 Just as it looked as if the worm was going to get the last of the upper hands to be had... 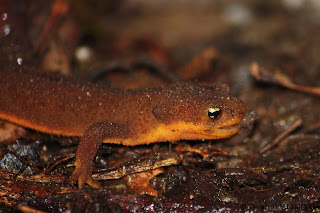 ... it was over. The newt had used the thrashing of the worm to his advantage. His pit bull grip and tenacity used against the worm's rotating and writhing simply twisted off a juicy piece of worm!  He didn't have to eat the whole worm, just take a bite out of it.  Talk about renewable resources,  just go get a bite of worm and move on to the next. It will just grow back!

wonderful post!!! ZOMBIES!!! I love it what a great comparison