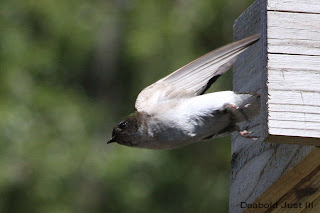 Shortly after moving in to our house seven years ago I ventured into the attic to locate the source of a water stain on the ceiling near the fireplace.  It was late Summer and I wanted to get ahead of more water damage before our wet season started.  Once I ventures in to the gloom and unknown I could see small shafts of sunlight piercing the blackness near the chimney's intersection with the roof line. I had to figure out how to secure the gaping fissures between the brick work and the roofing material from the inside.  The roof at the time was covered with thin loose concrete tiles that would easily break under the pressure of my size fourteens.


During some painful contortions between the ceiling joists and the sloping roof line my eyes adjusted to the dim light.  I could make out several dark tubular objects littering the insulation between the joists. As I moved to look closer I started seeing them everywhere.

My flashlight beam and focus zeroed in on one. It took a second to understand what I was looking at. These dozens of dark objects were mummified baby Violet-green Swallows. I found several nesting sites with some built on top of other nests full of more mummified birds. This was very cramped, dusty and disturbing. The "worst" of the nests was four deep.  I came back later with better equipped to clean up the area and the more I looked the more I found.  To be honest I could not get them all.

Several cans of expanding foam insulation later I knew that I could not completely seal all of the gaps from the inside enough to keep the rain out or future swallows. It is not that the gaps were to large to plug, I just cold not get to them all

Over the next few years the swallows would return each spring and shoot straight through the now smaller gaps and set up house keeping. I felt bad that by having filled many of the gaps it most likely would make it harder for the young swallows to find their way out of the attic. Fortunately I found that the days around when I thought the young I would leave the nests I left the garage door open half way.  This would allow them enough light to navigate the flight through the rafters to the garage and then drop down and out to freedom.

A couple years ago I made a batch of bird houses with Chickadees and Wrens on my mind. I forgotten about the swallows. When they returned the nest in the spring I realized this tragic oversight. I was out of wood so I re-purposed a two of the unused chickadee boxes by turning them on their side and ova-ling out the entrance holes.   Year after year swallow would fly by in ever tightening circles to inspect the new alternative to the gloomy doom in the attic. Year after year they chose the attic.

Early this Spring the roof was replaced. I made sure the two swallow houses I had placed eight feet off the ground were in good shape and looked welcoming. Spring showers would not let up. Cold weather pushed the swallow's arrival back a week or two then delayed their choosing a new nesting site. Pairs would circle for hours and then disappear for days

Then it happened, as if it had never been any other way. A pair of Violet Green Swallows took over and began to defend both houses eventually deciding on one.  I had been using all of my Jedi mind tricks to project my preference. Laugh if you wish, think of me as a nut but I got what I wanted.

Over the past four years I had been trying to photograph the swallows in the yard with no success.  In this case "no success" meant zero photographs. I had high hopes and delusions for this Spring as I had started working with a new camera purchased in late winter. Eight frames per second is not the fastest on the market but is was far faster then my three frame per second old timer.


The weather during the incubation and the first two weeks in the nest was cold and overcast. The week the babies hatched there were few flying insects to be found. The babies did end up spending extra days in the box.  I do not know if the adults can slow the incubation speed or if the birds just grew slower with less food when they hatched.  Any input out there?


Days before they did leave the nest the sun popped out and the waiting population of dragonfly nymphs morphed within hours and the game was on.  The swallow activity exploded and the babies were saved from certain doom. I dropped everything and used these minutes to get my first pictures.

In the years of failure I took careful note of where the nest box placement would be the best for both the birds and my camera. Now I had a fixed spot in a void that a fourteen gram four inch long bird would pass through sporadically at high rates of speed.  Simple.

For those who are as mystified by the metric conversion, fourteen grams is roughly equal to fourteen raisins or paperclips.  Still?  About thirty two birds to the pound.

This is "our" reward. I am sure the swallows are happier then I. 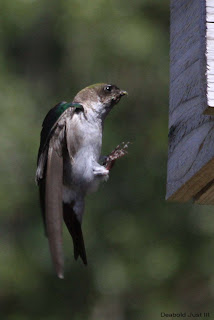 The Female approaching the nest box. 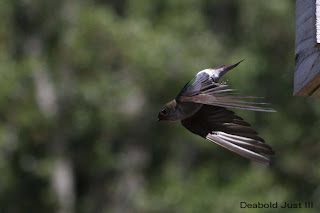 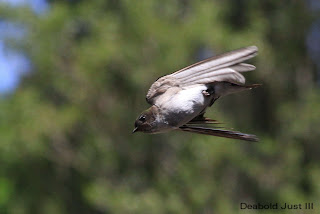 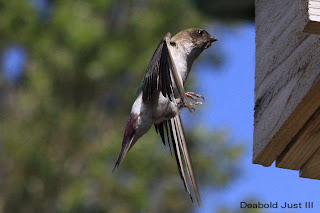 The swallows can fly at speeds upwards of sixty five miles per hour. Speeds approaching the nest are much lower but still amazingly fast. This braking technique slows them from roughly thirty miles per hour to entering the hole in as little as ten feet! 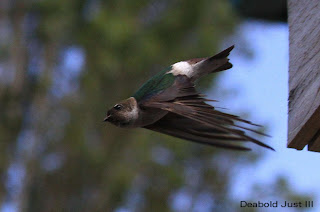 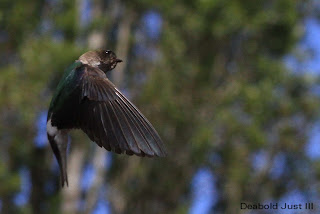 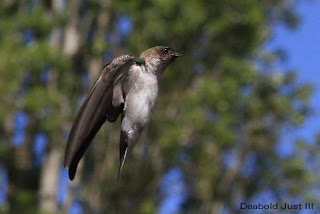 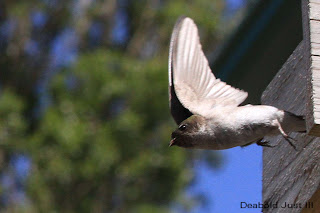 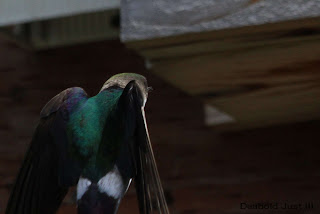 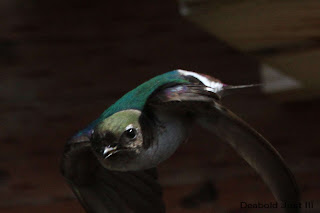 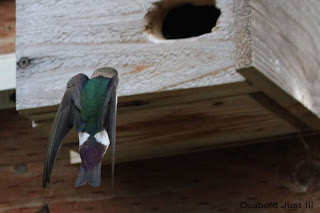 Here you can see the modified Chickadee house on it's side and the hole reshaped.  Swallows have very short legs and big wings. The oval is much easier to rocket through. 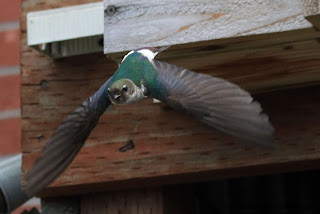 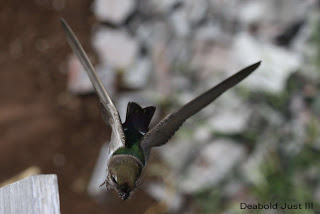 All of these pictures were taken with a wireless remote control.  I found it to be troublesome and unreliable but when it did work it did well. This angle is from above looking straight down. 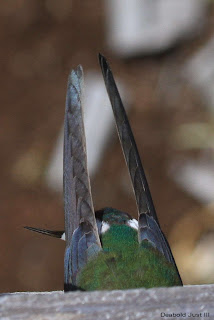 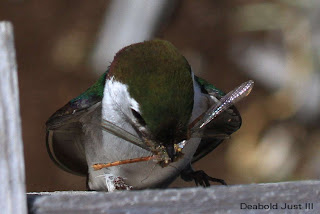 I was surprised when reviewing the pictures, I could not see anything in the birds mouth as it returned to the nest. This trip netted two dragonflies. Notice that he caught one going in each direction.  Each set of pictures that I took in which two dragonflies were caught at the same time they all were carried this was.  This is similar to pictures of Puffins carrying small fish that I have seen. 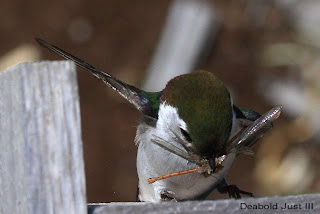 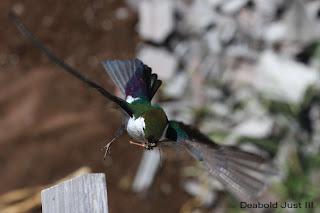 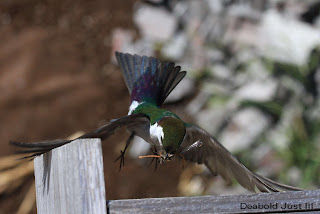 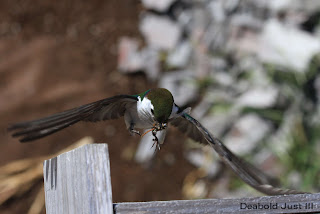 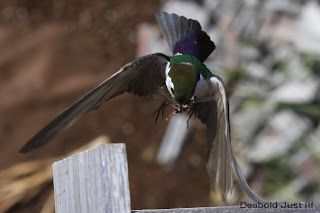 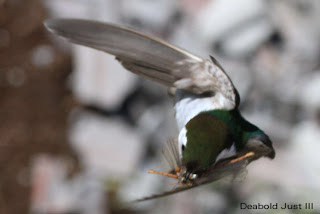 So, of course when you catch three you have to stack them however you can. 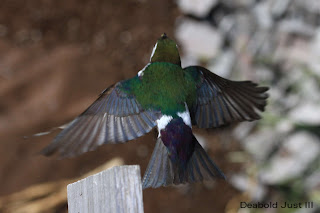 Posted by birdmandea at 7:56 PM

Oh this is just amazing!

Just stunning photos....Thanks for showing them