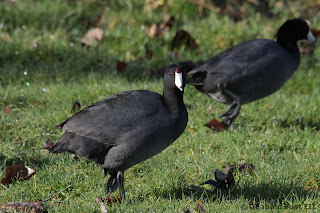 As a kid I did not know really what an American Coot was. Was it a duck?  It swam with ducks, it looked kinda like a duck and in the Wisconsin hunting regulations it was listed as a "game bird" with a daily bag limit of fifteen birds. When I asked my dad he grunted "damn mud hens". When I asked his older brother he was not as nice.

As kids the two of them grew up in remote North Eastern South Dakota.  Both were born in the same dirt floor farm house just as their seven siblings The farm house sat on land that had been in the family over a hundred years. Just as both of them were were starting to walk and talk the great depression crippled the nation.   My grandfather was fortunate and had secured work using his mule team to clear the irrigation ditches of weeds for the government. The work was hard but it was a steady job that took him away from the farm. My dad and uncle filled the gaps the best they could. Their most important task was caring for the mules the second was supplementing the families food supply.

They employed a variety of snares and traps to catch small game for food and fur bearing animals for cash.
They could make "good" money with the hides of  Snowshoe Hares in South Dakota during the winter.  Solid white hare skins in the winter brought two cents per hide, brown and white hides of the Fall and Spring hares brought and a penny and a half and brown hares of Summer secured one whole penny. They worked together and after a particularly hard winter came up with enough fur money to buy a .22 cal single shot rifle and one hundred rounds of ammunition. That brought in more fur money as well as meat from larger game.When times were really tough and nothing else could been found to hunt they turned to "mud hens".

As adults looking back on the hard times they both shared, it was evident there was a level of shame and disgust. For them it was a social stigma and was not something they wanted to talk about.   Carp also brought about the same feelings but that is a story for another time.

My father's friend and hunting buddy always did joke about cooking mud hens, the recipe was akin to digging a hole in the ground, lining it with fresh cow manure  placing the mud hens in the center and covering them with more manure and then hot coals. Bake for several hours while bullshitting and drinking beer. Then dig it all up, throw the mud hens away and eat the manure.  (Does not say much about he taste of the mud hens.)  My father did not say much as we all rolled around laughing, I don't think he never got over it.

Years have pasted as well as my father and uncle, mud hens remain.  For years now I have been subconsciously seeing Coots through the eyes of my father as something to be berated and avoided.
Our culture has only a few references to coots. The first one I ever heard of was "The Fighting Mud hens" a base ball team mentioned in the television series M*A*S*H in the seventies.  I later learned that there really is a baseball team in Toledo Ohio called the Fighting Mud hens.

So, is that it?  They taste bad and they fight?

Recently I happened upon a mixed flock of American Coots and Norther Shoveler ducks  at a nearby lake. The light was good and I thought I would watch for a bit. 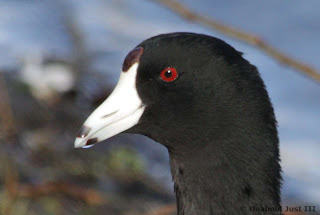 At first glance there is not really all that much to see. American Coots feed in the shallows at the edges of water bodies "mud" and they bob their heads when they walk and swim "hen".  They make a variety of clucks, grunts and muffled sounds that are not very melodic or romantic. Mud hen not a very flashy nick name nor is it all that demeaning. Since the coots all look alike and they don't look like much, it takes a bit of observation to figure out what is going on in the life of a coot. 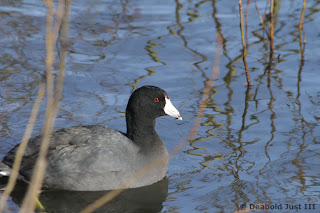 American Coots are a dark gray water bird with a black head and white bill. Found mostly near fresh water through out the North American they are abundant and not threatened  or endangered.  I would assume that if they were a bit tastier that might have changed their status. 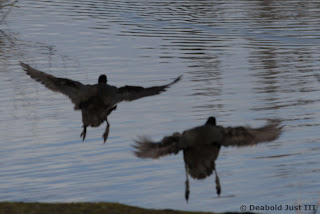 In flight they are just as drab as walking, sitting or swimming. 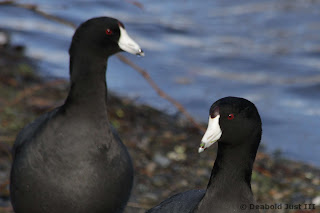 They have a shockingly white bill that contrasts with the dark, drab body coloration. If there is a difference between the sexes in their plumage I can not see it, apparently  they can or we would not have any coots 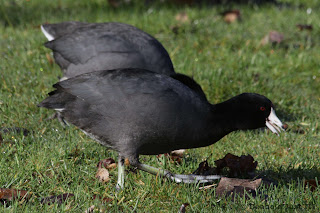 In addition to aquatic vegetation, insect and invertebrates Coots also graze on grass. The old adage of "you are what you eat" shines through when it comes to mud hens. By feeding in mud the finer nuances of decay, scum and bugs deeply flavor their flesh.  I do not ever recall seeing any animal ever eating a Coot. 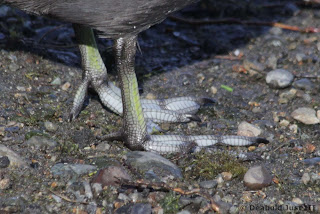 One of the most striking features of the coot are their feet. They do not have webbed feet, they have "lobed" feet.  While paddling around in the water during the upstroke the lobes collapse and wrap around the toes bones to reduce drag. During the down stroke the lobes flare open and increase the surface area of the foot to increase propulsion. The pattern and coloration of the feet conjure up visions of something primitive or prehistoric. 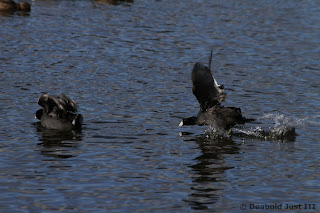 This modification of the foot allows them to walk on soft mud and vegetation without sinking. It also allows them to accelerate amazing fast when taking off, fleeing predators and fighting with their own kind.  They can go from zero to ass kicking speed in a blink of an eye! 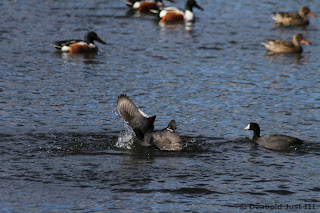 Their feet also allow them to propel their buoyant bodies from the water's surface straight down in search of food or to escape said predators and attacking members of their own kind.

During the Winter American Coots gather in flocks, as Spring approaches they pair up and become very territorial and nasty toward others of their own kind.  Every species of animal has it's own way of telling others of it's own kind it is trespassing. A snort, a bark, a curled lip or the beating of ones chest but with American Coots attack may be the only warning you get.  Within any given species of animal there is nothing to be gained for the species over all if territorial aggression leads to injury or death. (Mankind excluded.) There has to be some ritual rule that everyone understands to prevent interactions that in the end would prove to be harmful to the species as a whole.  Mud hens do not have talons or razor sharp bills to slash and cut their enemies with.  All they have is a very pointy bill and the ability to accelerate in an instant to drive their point home.

As I watched the flock of Northern Shovelers mill about feeding a lone Coot swam into view. It seemed as if it was just minding it's own business when without a warning that I could perceive it was attacked by a nearby pair.  I happened to have the camera up and ready to go when I captured the following sequence of a coot attack.


http://www.youtube.com/watch?v=O7J2B4ZjhYI
This attack style is common. I guess one coot attacking another is not the point, it's the tenacity and duration of the fights that brings out the best or worst in the coot. Even when it appears that there is a victor the fight it is not over.  Driving the intruder far away makes a point not only to the loser but to all who observer the conflict. 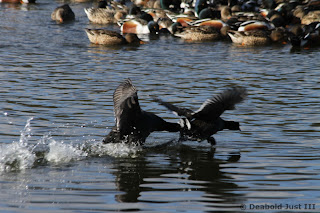 My father often said "life is hard when you shit through feathers". He had to have seen events like the one above many times and understood that with mud hens like us, life can be hard when you go though life with a target painted on your ass.
Posted by birdmandea at 8:22 PM

Awesome post. I have been to about a dozen wildlife refuges since I moved down here and coots have appeared at all but Morongo. Some of my pictures, I would swear their feathers are more navy blue than black. http://lynne-birdjournal.blogspot.com/2011/03/american-coot-la-aboretum-arcadia-ca.html
Great story also. Its always a pleasure to read your work.

I live in Toledo, Ohio. The Toledo Mud Hens are the AAA Minor League affiliate of the Detroit Tigers. Jamie Farr from M*A*S*H* grew up here and that's why there were references to the Mud Hens in that show. I found your article learning what a real mud hen was since all I knew was my hometown team!

Enjoyed this post. Our Story, the magazine of the Ferndale (CA) Museum, is publishing a historical piece on mudhens in its January-February issue, and we're quoting you (Birdmandea) on the "manure" recipe. If you have a real name you'd rather we use, let me know. All best. Wendy

I live on a lake in Southwest MN. There are many Coots each spring. There are always a few death by vehicles, these birds do not even try to move for cars. Anyway, this year I saw something new. The Coots are feeding on their dead brethren! 🤢