Babies of the Solstice

Summer Solstice on the Southern Shore of the Salish Sea.
Say that six times.
Nights cool, calm and damp. The sun is slow to burn off the morning mist while being heralded by a confusing blend of bird calls ringing through the heavy marine air. Hummingbird territorial fights start around 5 AM, I have been as slow as the sunshine by getting outside around 5:30. Camera in one hand, coffee in the other and my dog Jujube at my heel. 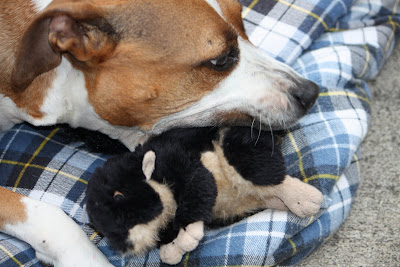 This is my dog Jujube. She quietly guards me while I bird watch from a folding chair in the garden. We have an aggressive Red Squirrel that rules the yard in her absence. On this morning she apparently was trying to send a visual message to all trespassers. 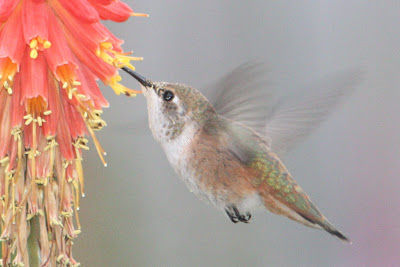 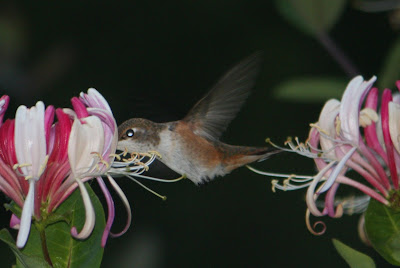 Same bird feeding at the Honeysuckle. I have been playing with the flash and all the buttons on the camera so my results have varied. Using a flash in the early morning light does not allow me to stop the wings completely. Later I will post some more photos of the humming birds.
The scent of Honeysuckle hangs haunting sweet in the damp morning air. 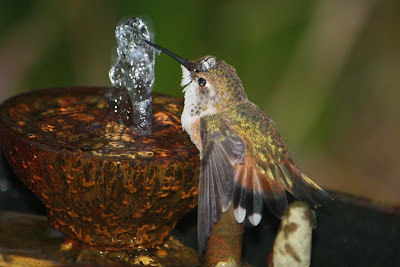 One of the neatest things in birdwatching is the narrow window of time in which you can see baby birds. Not all baby birds can be seen but if you know where to look you can still find them.

Here are some of the young birds I have found in the past week or so. 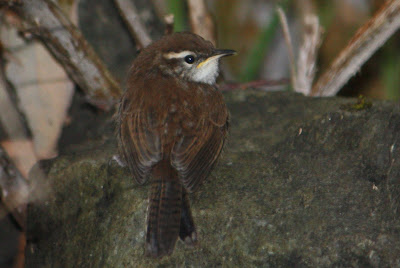 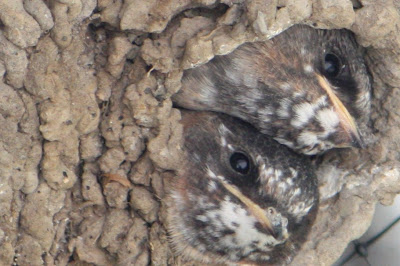 Cliff Swallow chicks only get to leave the nest once, no going back. They have to wait until the time is right. I do not know if hunger or overcrowding is the final motivating factor in them venturing out to join the rest of the world. 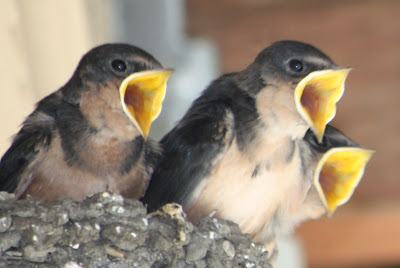 Young Barn Swallows sit quietly in their nest trying not to draw attention to themselves until the male Barn Swallow can be sen approaching. Then the competition is on, they loudest chick gets feed. truly a case where when you snooze you loose. 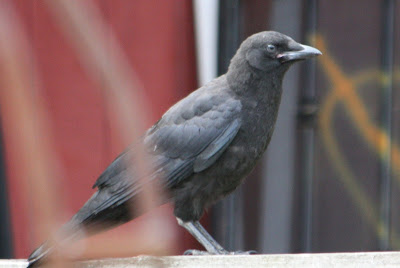 A new Crow fledgling eyes the fountain in the garden. Four young were hatched out by the pair that have been driving off the hawks this spring. This was the youngsters first trip to yard alone. Notice the gray eyes and yellow corners of the mouth. These marks as well as the "brown" hood will soon become difficult to distinguish from the adults. 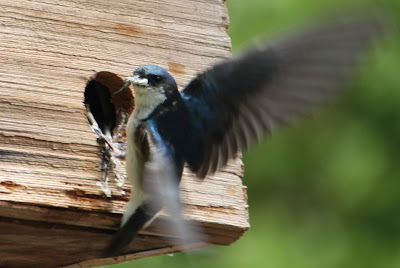 This Tree Swallow was featured in a previous blog entry called "Swallow Love". Here one of the adults removes a fecal packet offered up by a nestling after it received food. This practice allows the adult to move the waste material away from the nest keeping it clean and help keep predators from sniffing out its location. 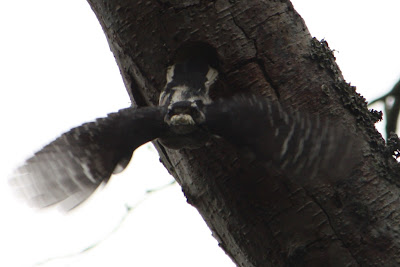 A male Downey Woodpecker also removes a fecal packet from it's nest. This bird always brought three of whatever it had caught back to the nest. His trips varied three to five minutes apart, all day long. I did not see the female bring any food to the nest even though she was near by and feeding herself. So I looked it up in one of my bird books. It said the male does the brooding in Downey Woodpeckers. Happy Fathers day! 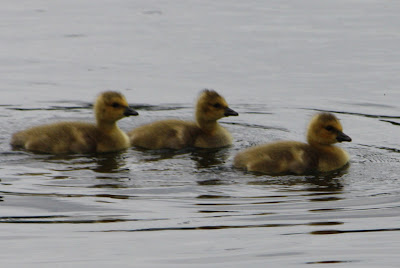 This is a late hatching of Canada Geese. The first hatchings started appearing around the last week of April. These were hatched on the 17th of June. 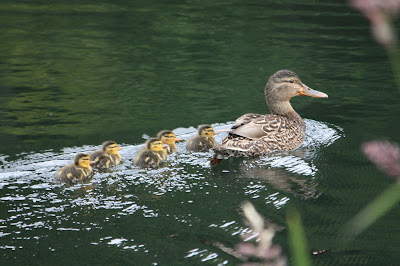 Mother Mallard takes her brood for their early morning swim. 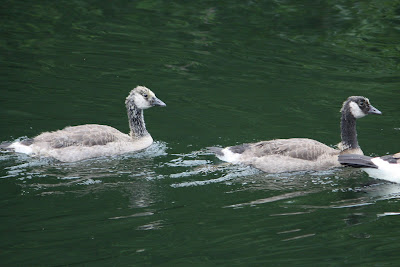 These are Canada Geese that were hatched in late April or early May. They have already started to molt in to their adult colors. They are becoming smaller versions of their parents. Over the past two months the number of goslings in the area have been getting smaller each week. Only experience adults will get the most young to adulthood. When you live near an eagle nest you take your chances. 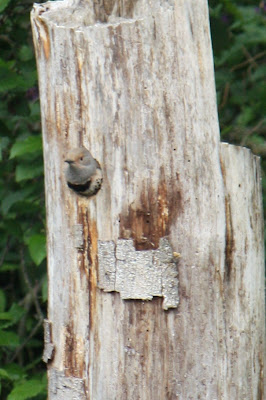 I first noticed this Flicker nest under construction about a month ago. I watched the Male leave as this Female took up her shift on the nest. Neither brought food but the nest was never left unattended. I am sure they will have young to feed very soon. 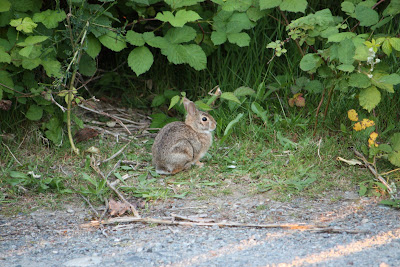 I know it is not a bird but we have had at least three litters of rabbits in various parts of our yard so far this year. The Escarole, carrots and other vegetables have faired well among so many beady little eyes. It is still early in the year, I am sure there will be more and the garden can not hide forever. 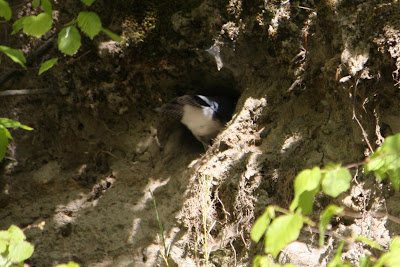 This may not be exciting to you, I am very happy with this photo. This is a female Kingfisher returning to her burrow. Kingfishers require sandy hillsides near feeding waters in which to dig deep burrows. They lay their eggs in the cool ground to protect them from predators. It has been a long search for a nest like this. They are hard to find and the Kingfishers are very shy. I do not have any better photos. I did not want to stress out the parents. I got my shot and got out of there.

This next photo may not be for all viewers. 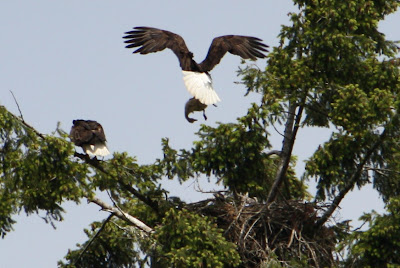 This is a two for one deal. The local Bald Eagle pair have been keeping their youngster hidden in the bowl of their huge nest for months now. Here the returning parents bring a Canada Goose Gosling home for lunch. I have watched this nest for dozens of hours over the past six months. This is one of the most amazing moments, the eaglet's head is directly below the flying adults right tail tip.