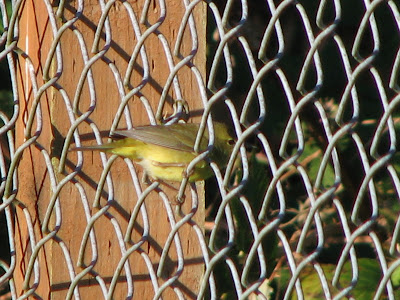 First picture of the little tormentor.
For the past five years each spring I get a glimpse of a small yellow-green bird in my yard. Three years ago I got my first picture. From what I could tell it was a female warbler. This statement right here will separate birders in to groups. Some will not take on warblers at all, they are difficult to see, erratic and just never seem to come close. Those who take on the warbler challenge may not take on the challenge of identifying female warblers.

This bird is small, yellow, green and gray. Not easy to see in the new foliage of the springtime. I have been carrying my digital camera with me in the yard every day so that on the off chance that I would run in to her I could try to get a photo. This bird has had all the luck, I have seen it eight to ten times this year and have gotten a few photos that just tease me more. Even with a 250mm lens on a 12 megapixal camera I was having difficulty catching her in the open. 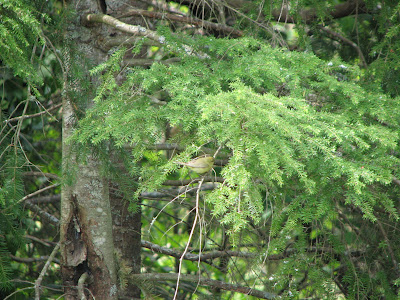 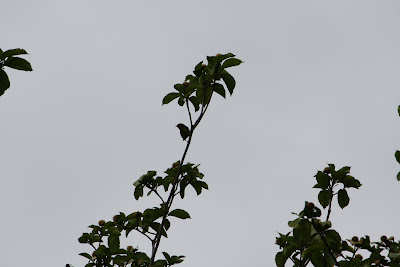 Too far away to make out any identifiable details. 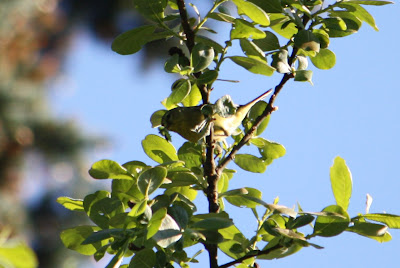 Here she is collecting inch worms for a nest near by. This was a good sign, it meant she was going to be around for a while.
Yesterday it started before sunrise. I could hear an annoying, insipid and continuous, chirping from the trees bordering our yard. It was the "I am over here" call of a cold , hungry and scared young bird that had just fledged from it's nest.
I got my day started and took a few minutes around 8:30 AM to investigate. The noise and I mean noise was still present. It was one of those high frequency noises that confuses your sense of audio direction. When I was facing what I thought was the noise it sounded as if it was coming from behind me. As I turn around to zero in on it, the direction changed. Then I realized there were three young birds about fifty to sixty feet apart in a triangle around our front garden.

I found an out of the way spot in the yard and stood still for a moment. There she goes, the little yellow bird shot by. I started to follow, what a mistake, I was so confused in just a few seconds I could not tell what I was following. She was just rocketing around the yard from one fledgling to the other and all were in deep cover low to the ground. I would have never found any of them if I tried.
I noticed that during one orbit she stopped at a branch that looked like a good ambush site. I got there and pulled out my little red bird call and let out a squeak. 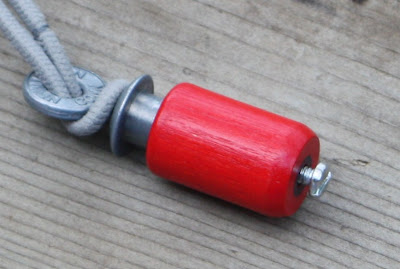 You may have seen one at a nature store or national park gift shop and ever wondered if they really work. I have used them for many years and I have given them to kids who's minds I have tried to poison with bird watching. Most of the time I got nothing for my fumbling squeaks and chirps. When it has work it has been magical. This past February I was in Dallas. I pulled it out while near a steep banked stream and birds were coming at me like bullets, even over shooting my location looking for the source of the sounds.

Birds hear the noise and think it is an intruder in their territory. I have tried to make sounds like birds with it, but I think I am just fooling myself. I have found the simpler the better, just a quick chirp and see if any thing takes an interest. I have had mixed results and never know if it will work or not in any given situation. I can make a lot of really irritating noises with it.
On the fourth squeak, she was on the branch I had selected in front of me and I got these photos. She was not happy at all with me distracting her from her rounds and took off not to be seen again. 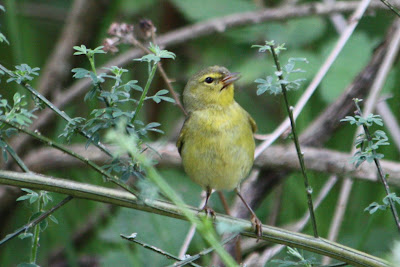 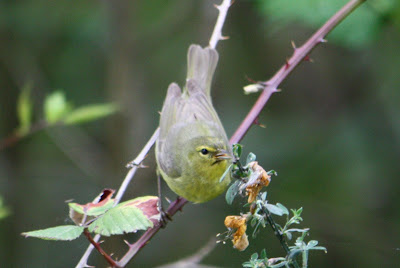 So, now I have good photos of a female Orange-crowned Warbler and I have another successful experience with the bird call. I will continue to use it irritating noises and all. This bird call was one of the those I had given away years ago to a dear friend. She passed away and it was given back to me to remember her by. I keep it on my camera strap so it is always with me for just such an occasion. I would like to think she is with me too.

The next time you see one of these bird calls, get it. Give it to a kid and let them go annoy the wildlife. You might make a birder out of them. You might try it yourself.

Have fun, take care.
Posted by birdmandea at 2:33 PM

Little Yellow Bird is exactly what I've also been calling this bird. It drives me crazy when I can't figure out a species which is why I'm SOO excited to have found this Page thank you so much!!

Haha - I have been stalking a similar mystery bird for the past 3 summers, and thouroughly enjoyed your narrative! We have been calling it "the Packer Bird" (green and yellow), as we live in WI. I am still trying for a close up so that I can correctly identify it. Your little bird call gadget sounds great; I hope I can find one too! Thanks for sharing :)