Life with Flower and Kiwi

When I was ten I asked my mother if I could have a pet bird. I did not really care what kind of bird, I just wanted a bird. My interest in bird watching was well underway and I wanted to study one up close. I promised to take care of all of it's need and pay for it with my own money I made shoveling snow. I told her I would keep it in my bed room and she would never have to deal with it.

Not just no. Hell NO.

I asked why. She said, and I quote, "human bodies emit gases that would kill caged birds". I never really believed that and realized she just had her own agenda and something personal against birds. A year or two later I asked her if I could buy a Boa Constrictor and she paid me $40.00 to drop the subject. Needless to say, my mother had issues.

Years later while I was in the Army I was stationed in the Republic of Panama. Every one had parrots and Macaws. Big ones, small ones, those that talked and those that screamed. I fell in love with every one I saw. In May of 1980 one of my fellow Sergeants was being reassigned back to the States and he wanted to sell his Amazon Yellow Headed Parrot with the cage and export papers for $50.00. I could not pass up this chance to finally have the pet bird I had always desired. His name was Thomas and he spoke Spanish, (actually he swore in Spanish), a lot. He was timid and not very friendly, I thought as time went by we could over come this. We late found out he was a she.

I brought him home and surprised my wife and son with him and I renamed him Flower under the concept that she would always have a fresh living flower from me (I was cheap).
Flower joined the family and a year later while traveling home from work I stopped at the local roadside produce stand to buy my daily ice cold green coconut with a straw in the top and found a shoe box with four tiny Amazon Yellow Headed Parrots inside. The kid selling them told me they had cut down a dead tree for fire wood and found a nest inside. I wanted to buy them all, but being on a Sergeants pay I could only get one. I brought it home and we named it Kiwi. We later found out that Kiwi was also a girl.

We fretted over how to feed this frail little bird, she was less then a week old. Flower went crazy when he saw Kiwi. When it seemed Kiwi was not eating enough of the food we were trying to feed her we introduced them to each other. Flower immediately took charge of raising Kiwi. She feed, groomed and protected Kiwi as if she were her own.

Over the years the pair traveled with us all over the continental US. We live in Texas, Arizona, Oklahoma and Washington, They travel as far a Maine, Florida and all points in between. They went every where with us and became characters and constant companions. Their vocabulary has grown over the years to roughly thirty understandable words, several unique sounds and a multitude of screams, ohhhh the screams.
Twenty nine years have passed since we got Flower, Kiwi is now twenty eight years old and Flower should be about thirty two or thirty three now. Last week as I was giving them a spray bottle bath I took these pictures. They are still going strong and health. Yellow Head Amazons have been known to live to be over a hundred years old.

Be careful what you wish for. 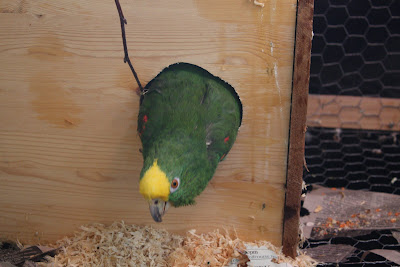 Flower was not in a mood for a bath so she ran to her box to hide. 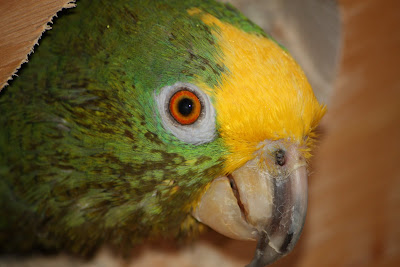 Flower would peek out if she thought I was done spritzing Kiwi. 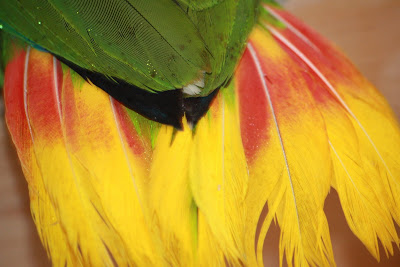 Here is Flower's South end as she travels North. 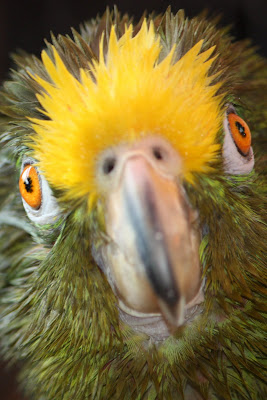 Kiwi ready for her close up, she loves to bathe and show off. 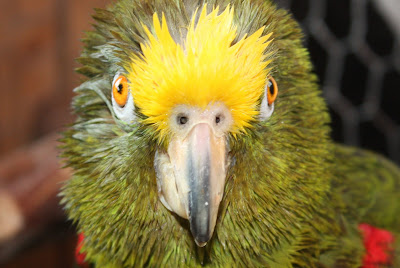 "Come here, pretty bird" is how Kiwi lures you in. Never ever, ever, ever fall for her invite. 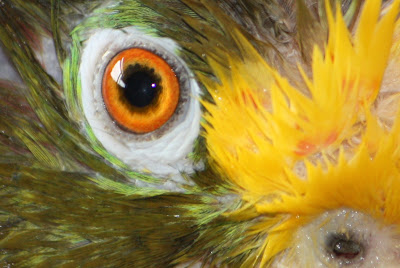 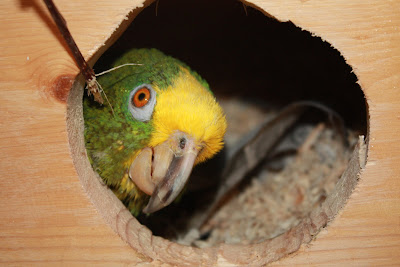 Flower says "Hello" but her eyes say go away.

I love these birds with all my heart, they are not pets. For all intents and purposes they are still wild. The lesson I learned from living with them all these years is that when you take on an animal from the wild you are in it for the long run. Amazons have been referred to as the "Pit Bulls" of the bird world. I also have two Pit Bulls. My Pit Bulls are harmless and loving, my birds are secured and deserve far more respect.
Posted by birdmandea at 8:21 AM

Flower and Kiwi have always been part of the family. I remember them saying hello when ever the phone rang and crying with us kids when ever we would get upset. I don't remember the cussing in spanish, but there's probably a good reason for that.;-)

Dea, Flower and Kiwi are so beautiful..(and I have some of their feathers!)
You are the best birdy daddy ever!