This past winter I spent many hours watching the birds in the yard. With these yard birds I had time to look for characteristics that might help me tell individuals apart. Rarely I can find one or two birds in a particular species with something identifiable enough to follow. Some are easy, this winter snows force three Fox Sparrows in to the yard. Each was unique enough to tell apart but they as well as the Varied Thrushes were seasonal. The resident birds like the Bushtits and Dark-eyed Juncos form flocks during the winter then split off into pairs in the spring to make secretive nest in thick cover. The Spotted Towhees and Song Sparrows can be told apart to a degree but then they are very secretive all year long. 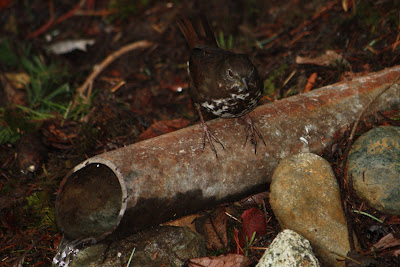 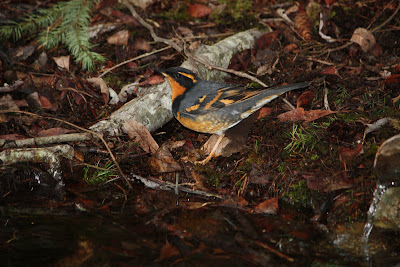 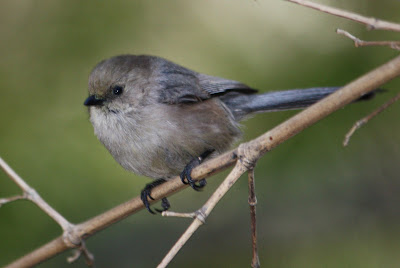 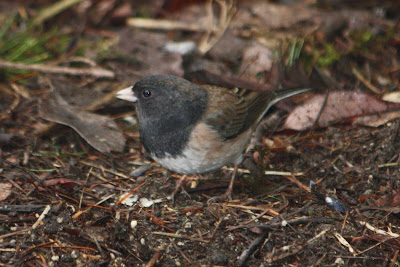 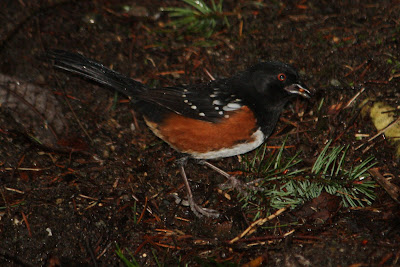 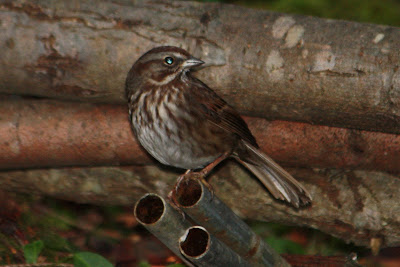 
I made four Chickadee bird houses during the winter and placed them in the yard around Mid-April.

From observations I thought I could get two pairs of Black Capped Chickadees to nest. I was not sure of how the winter resident birds were going to divide the yard territory wise. I drew my own line through the yard trying to think like a Chickadee looking for a place to nest and put two boxes in each zone. I selected locations that offered what Chickadees prefer. Four to ten feet above ground, clear approach and exit avenues. Weather protection, near by cover to hide in and watch for predators. Water and areas to forage for food. The most important variable in the box placement was if I could get good camera angles and lighting in order to take photographs. I put the birds where I could get the best chance for the best photos.Chickadees are easy when it comes to that. I had hoped to pull in a House or Bewick’s Wren pair but that would have been too good to be true.

Two weeks after I put up the boxes I went filled them white pine shavings I bought for the chickens bedding. I found one of the boxes already had a fully formed nest and another had roughly one half of an inch of green moss in the box. Both locations were the ones I had hoped they would use. I had a security camera I bought at Harbor Freight on sale for $20 a few years ago. It works on 115 VAC and connects to a VCR with a 25' lead. It can see in the dark with it’s internal infrared LED’s and is one and a quarter inches in Diameter. The best thing about it is that is has a self adjusting focus and can focus down to within a couple inches. I grabbed a battery operated drill and a bit and watched over the selected box and waited for the birds to show me their routine. In less then twenty minute I have the pattern figured out, hole drilled, camera installed and watching the female put the finishing touches on her nest from the 27" TV in our spare bedroom. Four days later she started laying eggs. Eggs that were smaller than jelly beans in the nest were the size of duck eggs on the TV. Momma Chickadee never knew what was going on.

The behavior around the box changed when the first egg was laid. A week later the same behavior change happened at the second box. Both boxes were successful and I would like to share with you both of their stories. This is the photo story of box number two. My next installment will be the story of box number one. Make sense? I never implied it would. 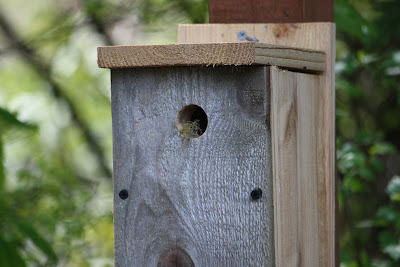 Here is a tell tale sign that some one is nesting. 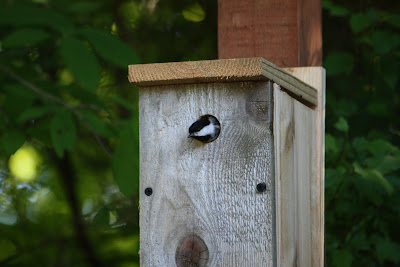 Oops, I got caught. 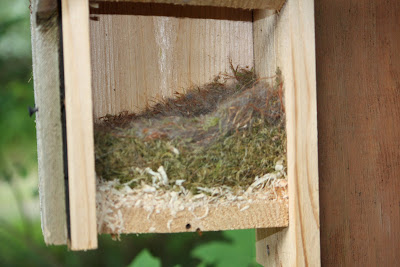 Here is the nest about one week before egg laying. The bottom layer is the saw dust from making the box. I used clear Western Ceder with no preservatives, stain or paint. I put a "face" of older weathered Cedar on the front of the box to make them look older and more inviting. The green layer is fresh moss and the top white-gray layer is a combination of plant fluff, fibers, tiny downy feathers and spider webs.

We need to talk about how I took these pictures. Taking a picture of a tiny bird around while it is rocketing around in the forest takes a bit of forethought. I used a tripod that I left in place for two weeks before I started to take pictures. It takes a day for a Chickadee to lay an egg. Four eggs, four days six eggs, six days. The hen incubates from the start and in 12-14 days the chicks start to hatch, one a day in the order they were laid. This works well for photos because the birds can become accustom to the tripod and myself while the hen sits and when the chicks need to be fed the adults are accustom to myself and the camera being there.

So how do you "hit" a moving target? Meet my little birding friend. 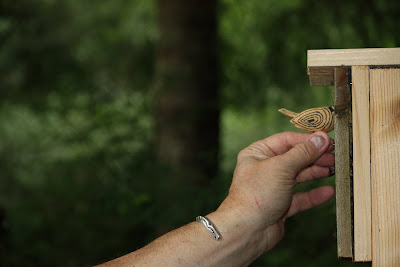 It is a small hand carved Basswood Chickadee. I carved it back in the late eighties. I drew a series of black lines evenly spaced following the curves of the body. This is invaluable in focusing and adjusting to natural lighting or the flash. It gives me a target to aim at when there is nothing there. It also gives me a perspective of the back ground and overall composition of the photo. It also allows me to take a digital picture and make corrections before I waste time and unnecessarily stressed the Chickadees by taking pictures that are out of focus. Once I have everything set up I make sure the camera is set to manual focus to prevent any changes. Years ago I tried this with a 35mm camera, all I got were rolls of blurry useless pictures. 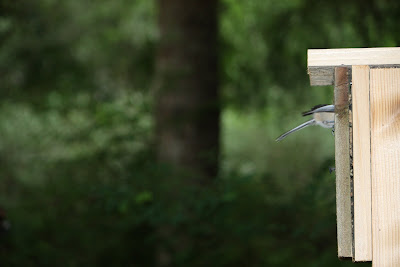 Less then a minute after the picture above was taken the owner hit the hole.

Here are some of the roughly 225 digital pictures I took over a three week period. Click on the photos to enlarge them and take note of all of the different kinds of worms and insects they brought back to the nest. I did not crop this group of pictures so you can see the full field of view the camera had. I was able to identify the sex of this pair by observation, trust me. See if you start to notice the differences between them. 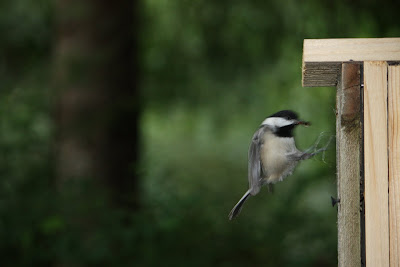 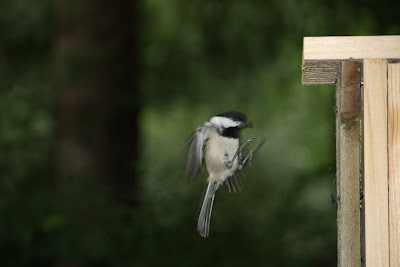 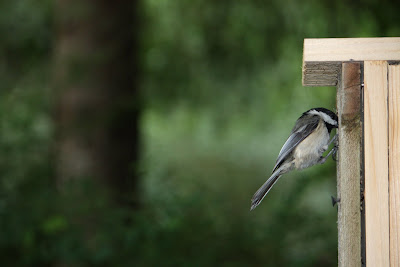 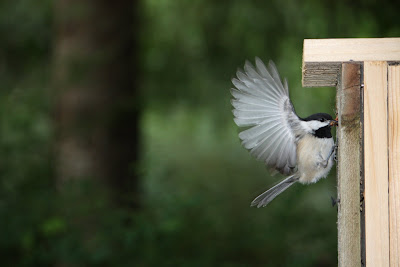 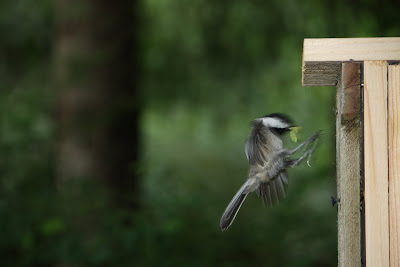 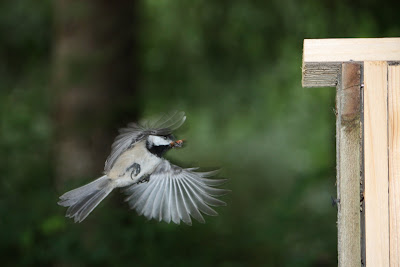 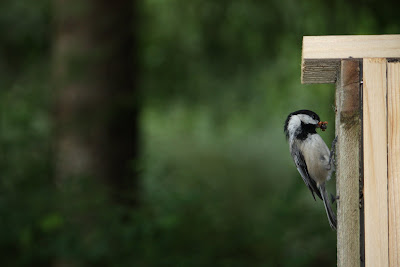 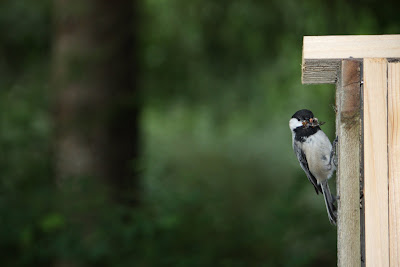 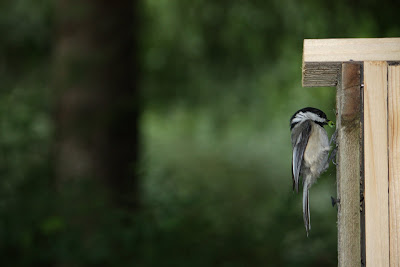 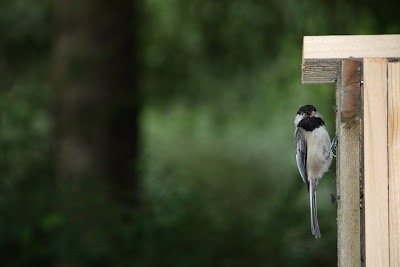 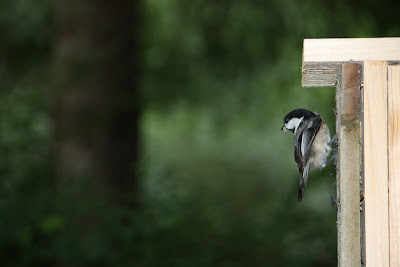 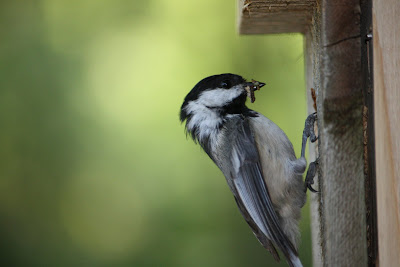 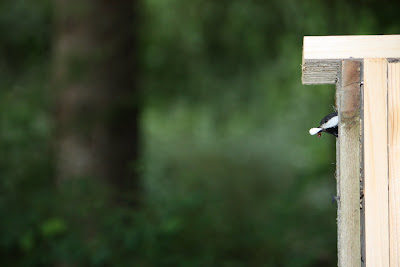 Now, the chicks have hatched. When the adults bring food to the nest the chicks beg wildly to be fed, the luck one to get it's morsel then bends over to expose it's tail to the adult. The adult stimulates the chicks but and the chick expels a "fecal sac". This is a neat membrane encased waste capsule that is either eaten by the adult or removed from the nest and dropped some distance away from the nest. This keeps the nest clean, odor free and difficult for predators to locate. 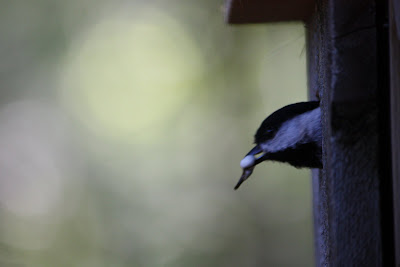 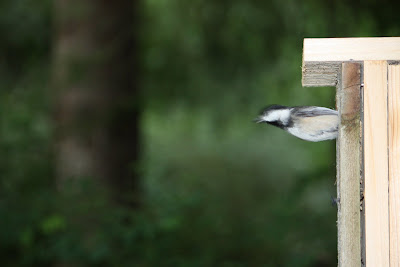 When the adults approached the nest I could see them coming for quite a ways. Sometimes they would linger outside the box softly calling to the box while keeping an eye myself or the camera. When it came time to capture the exit photos I had to react in a split second. The instant I saw the head appear int he hole I would hit the remote camera release. In the fraction of a second the exiting bird could cover from two inches to three feet. A lot of hit and miss doing this. 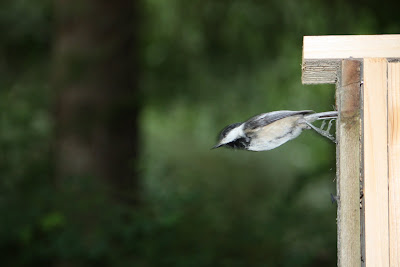 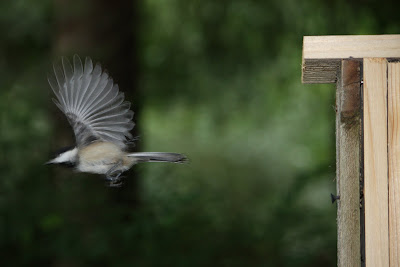 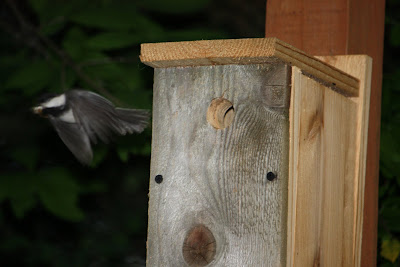 Here is a great example of doing it wrong. When the camera is at the side of the nest I have a focal plane that does not change. This picture was set up at an angle and the bird got past my optimum focal point and is out of focus. Anouther point is that the camera is limited to the fastest shutter speed uner it's internal flash is 1/200th of a second. I just inches the bird could accelerate to fast the camera could not freeze the image. This is something that can be seen often in my pictures. I am the type of person that wants to prefect my tequniue before I dumps buckets of money into equipment. I need to justify in incremental steps.
Posted by birdmandea at 8:13 PM

Impressive. I am amazed by your knowledge of your subject. I have yet to even figure out where to put a nest box so it will be used. I look forward to hearing more. I especially want to see those fledglings (of course).

I live in North Bend, WA, on the edge of a greenbelt on a 10,000 square foot lot. I currently have one chickadee box that has had good success. How many more chickadee boxes can I place on my property?
Are there any other types of birds that might use the chickadee boxes?

Just slap that box up anywhere! :) Ours is between 2 garage doors. Not a problem for these birds! See: http://shitmy5yearoldsays.blogspot.com/2010/05/for-birds.html