All in a day

Yesterday was Thursday and I had planned on taking some time to go to the local wildlife refuge to look for young birds. It just did not work out like that. The meeting I had been scheduled for started two hours late and the cloud cover never burned off as forecast had promised. The day got busy and I never made it.
This morning the weather was at sunrise was spectacular. The kind of start to the day you long for during the gray of winter. The air was filled with the sounds of the usual morning birds with the additional cries of young Cedar Waxwings. I have been hearing the "noise" for the past few days and seen the ghostly images as they chase their parents high in the trees. The sun cooperated and I was able to get this picture. 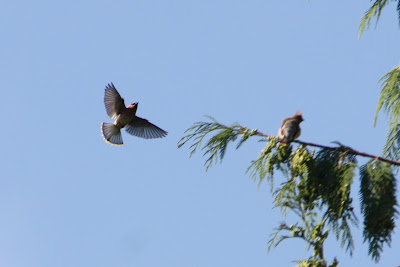 A young Waxwing refuses to take to wing and follow it's parent. After dozens of attempts to get the young bird to fly a passing Crow spooked the the youngster and it dropped straight down out of sight. 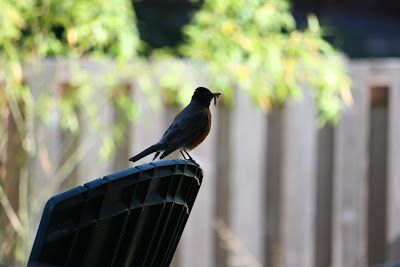 On the other side of the yard this Robin was trying to coax it's young out of the nest with a big mouthful of juicy worms. 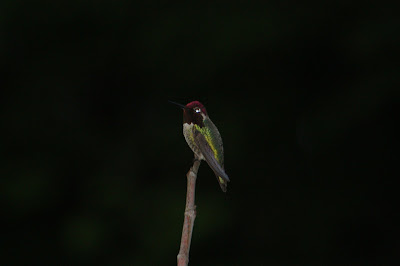 Here the local Male Anna's hummingbird lords over his domain. 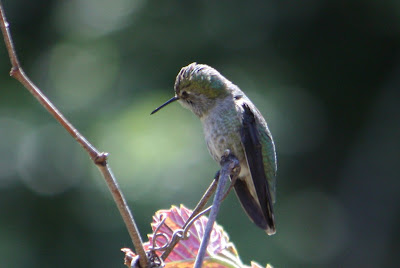 Here is one of his offspring that recently fledged.

With the chores of the morning done it was time for a mid-day treat and we were off to the beach. We live near the Fort Lewis Army base here in Washington state. Ft. Lewis has a small saltwater access on the Puget Sound and it is called Tsolo Point. A steep and curved road leads down to this seemingly ugly scrape of gravel at the waters edge but it is one of the best kept secrets on the base. I have been coming here for about thirty years now and it never fails to provide something new.

The tide was coming it and the dogs were dieing to to get into the water. 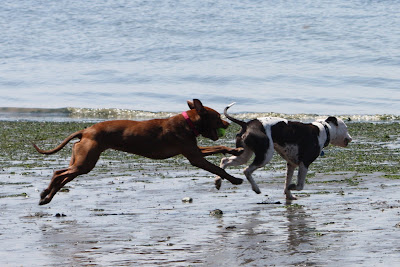 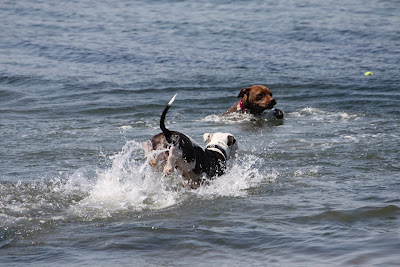 Tsolo Point is a just North of the Nisqually Wildlife Refuge and there is an uninterrupted shore line from there up to the gravel loading dock at it's South boundary. This is a rich wildlife focal point with Keatron Island as an off shore obstacle to the flow of the tide which forces fish and sea life come closer to the shore. The waters of the South Puget Sound are in excess of six hundred feet leaving only the narrow bands along the shoreline where food is accessible. In the 1980's a group of Boy Scouts worked on a project where they made an artificial reef out of use tires tied together and sunk just off the shore. This created a safe haven for the lower end of the food chain and a magnet for the upper end. 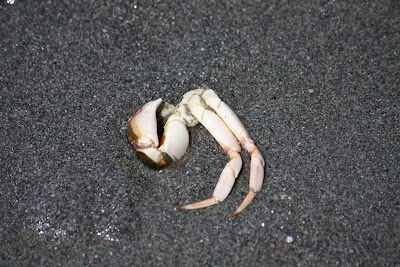 The area is a complex mix of rocky, muddy and sandy beach so there is something for everyone who lives here. A number of crab species are found here. 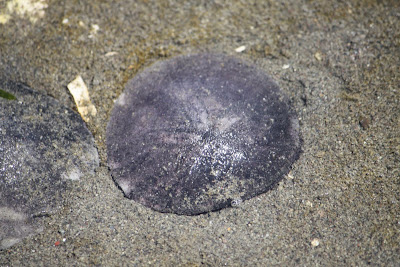 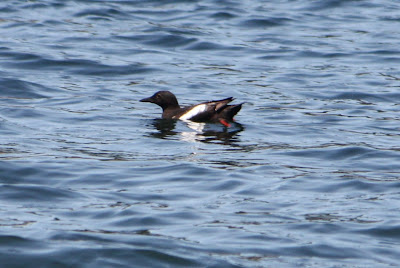 As the dogs played in the water and extra "dog" appeared just behind them out in deeper water. 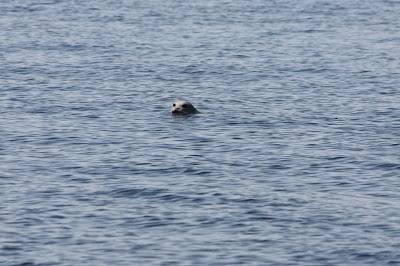 This is a Harbor Seal, the dogs splashing in the water drew it in fairly close to see what was going on. Typically when you see a seal there are more around. They are shy and sneaky, but will sometimes come surprisingly close. They are usually around long before you notice them. When Sea Lions show up the Harbor Seals disappear.

As I lowered the camera from my eye after taking the seals picture, off to my left I saw an large dark object moving fast toward the water. I turned and took this series of pictures. The first is out of focus due to the camera's auto focus hunting for the image. 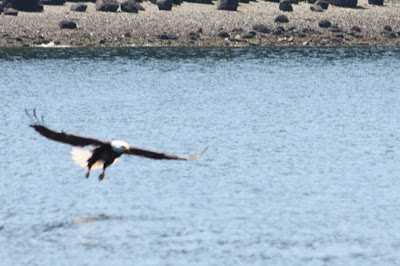 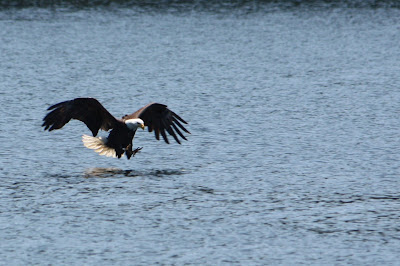 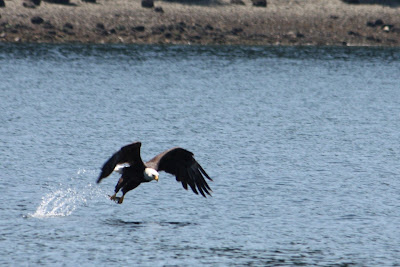 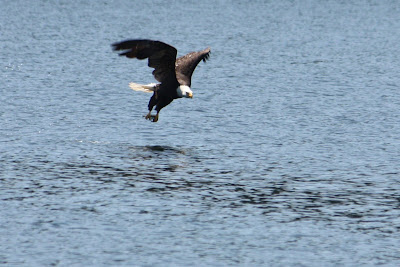 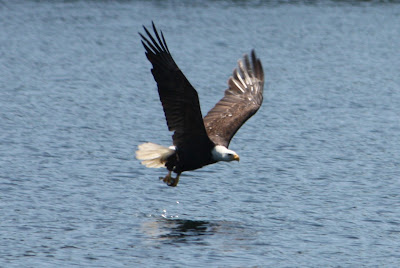 I could not tell what kind of fish it was but then again I am not going to eat it. 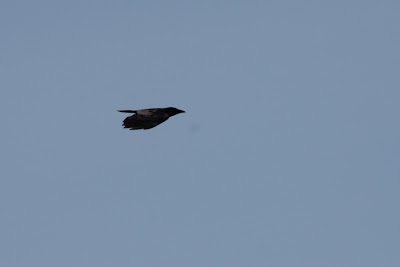 Everyone wants a free lunch! This Crow was in hot pursuit but never had a chance to catch up. 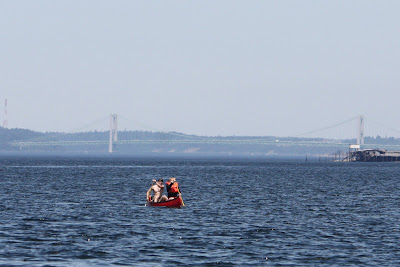 Here is a non wildlife view. In the distance to the North are the Tacoma Narrows, home of the famous "Galloping' Gertie" bridge that collapsed shortly after being opened back in November of 1940. In the foreground is the newest bridge that was recently opened next to Gertie's replacement. There is no charge to cross the older bridge but there is a toll to cross the new one on the way back.
The structure to the left is the Steilacoom Marine. The marina has fallen to disrepair over the years after the owner was tragically killed during a botched robbery.

As to the canoe, I have canoed on the Puget Sound in the past. I doubt if I will EVER do it again. Tides are deceptive and dangerous and the water temperature here is cold. So cold it can kill in as little as fifteen minutes in the winter but during the summer it is much safer, about twenty minutes. The cold water take it's toll on the dogs play time so frequent beach runs are needed. 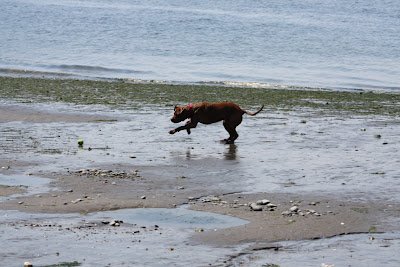 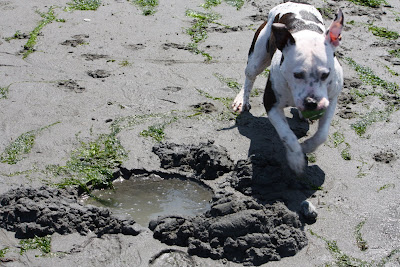 The net result was cold, tired and happy pit bulls as well as a happy photographer!
Posted by birdmandea at 9:15 PM

Sorry, the link below was from me, its an NPR story I heard on the Radio yesterday about crows. It's really fasinating. Did you know crows yell at folks they don't like?