A wonderful bird is a pelican,

His bill will hold more than his belican.

He can take in his beak

Food enough for a week;

But I'm damned if I see how the helican.


When I was in school at some point in time I was introduced to Ogden Nash's poem "The Pelican".  My English teacher did not have access to a service such as Wikipedia to get her facts straight.   The very first thing I find as start to write this entry is that Mr. Nash did not pen this poem so in trying to give credit where credit is do,

In forming the core thought of what this blog would be I knew that I had to use those words.  I never became a big poetry fan so this cute little ditty slipped to a back corner of my mind to be pulled out at the right moment to impress someone with my refined, well rounded and cultured mind.

There have been few opportunities.
There were no pelicans In Wisconsin.  When I first heard the poem the concept of a pelican became exotic and something far far away.  I could see them on the television, Flipper, remember Flipper?
The only other images I can remember of Brown Pelicans on TV was when they were oil soaked after some drilling disasters in the Gulf states or California.

I could see them in my birding book. I had the one birding book at the time, still have it. I would spend hours studying  and thinking of the day I could travel to each of the colored areas on each distribution maps in my bird book. Pelicans ranked among the highest of my "wanted birds".  Birds like the California Condor, Golden Eagle, Vermilion Flycatcher and Road Runners did as I recall rank higher. I still have not seen a Condor.

In July, 1975 I stood in a marshy backwater of the Yellowstone River. An unbelievably large white feather had lured me from the comfort of a dry trail into ice cold water well over the tops of my boots. It floated barley touching the surface of the water as if it had no weight.
I waded in deeper and examined the feather.

My mind raced through all of those distribution maps I had studied for countless hours and made the logical choice. I mentally declared it to be a Swan feather and turned to make my way to higher ground. I climbed back up to the narrow trail and looked back to the river below me. From my right saw a string of white pearls silently gliding above the river's surface. The string slowed, dropped lower to the water and turned to their left as they dropped their feet and slid to a stop on the marsh just feet from where I had picked up the feather. My jaw dropped along with the feather. Eight brilliant white American Pelicans were before me decompressing and adjusting to their new static environment.
My feet were very cold.

After a few moments the group started to drink, vocalize and interact with each other like the were comparing notes about the flight in as a hush fell over the backwater. The closest bird looked up at me and I could see it blink as it focused in on me.  I was instantly struck by how large and primitive it looked. As if a portal had opened  from another dimension and we were both sharing a “first contact” moment.  "My" pelican notice it’s companions moving toward the river's current and turned to followed. One by one they entered the flow of the river and disappeared behind the trees headed downstream.
I was left in the silence of the moment. 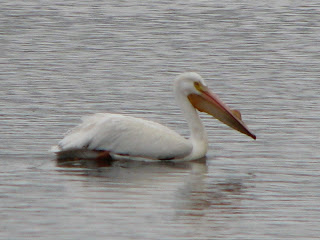 American Pelican
This is not one of the birds from 1975. I took this picture in 2009 in Eastern Oregon. It is the only image of an American Pelican I have.  Sorry, they have been hard to come by.
==================================================
Last month my wife and I spent a few days in Seaside, Oregon.  One day I had to myself and I crafted a plan to find some Brown Pelicans and Heermann’s Gulls.  Both of these species breed much further South but during the late Summer and Fall they wander North along the West coast. These wanderings vary from year to year with food supplies and the weather playing a large part in how far and for how long they travel. It also limits opportunities to see and photograph them.  Both were lofty prizes I wanted.
I searched for three hours and covered over sixty miles. I reached the last place I had planned to visit after doing my map recon the night before.  I  found a the jetty at a small marina that looked promising. I approached form the South and saw ab-so-lute-ly nothing. 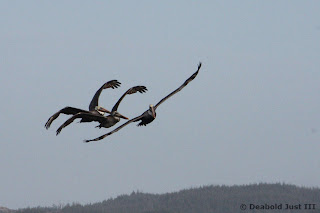 Tired and disappointed I lowered my camera and as if on cue, three Brown Pelicans materialized from my left just feet above the water. They turned directly toward me, rose up and flew over my head. They kept turning and landed on the far side of the jetty. 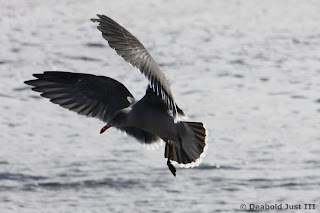 I worked my way to the other side of the jetty and found a small group of Heermann's Gulls. 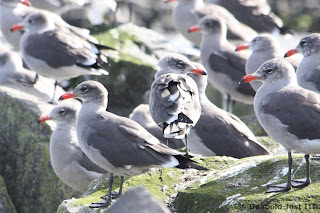 They stood their ground as I approached. 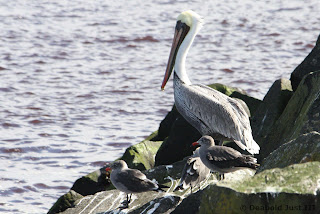 This side of the jetty was shaded and sheltered from the wind.  I could see a large group of the Pelicans  a hundred yards or so ahead.
It took a few moments for me to realize there were hundreds of Heermann's Gulls between me and the Brown Pelicans sleeping in the rocks. There was very little movement and almost no bird noise you would expect in such a large collection of birds. 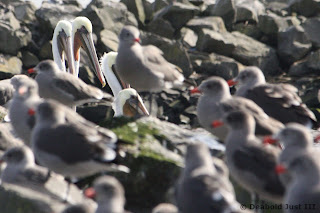 I took a few quick pictures and backtracked off the jetty as fast as possible. I did not want to startle hundreds of sleeping birds for a few pictures. The light was not at a good angle and the dark birds against the dark rocks did not look as if the had much contrast between them.    The later is what happens when you forget to take your sunglasses of before trying to take pictures.

All summer long my wife and I have been trying to get away to the Washington coast for a day with the dogs on the beach. The summer slipped away.
Last Friday the weather report looked like the last reasonable day on the coast for a long, long time to come. We were both off, the tank was full and the dogs are always ready to go to the beach, any beach.  We figured we would get some Dungeness crabs in Tokeland and search for mushrooms in a campground that produce some amazing  Boletes last year.  Had to settle for fresh shrimp and the mushrooms had already been picked over.

The weather was amazing for the time of year and the Pelicans were in a photogenic mood. 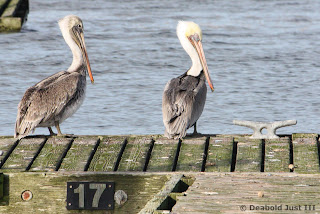 Brown Pelicans, immature on the left and non breeding adult on the right. 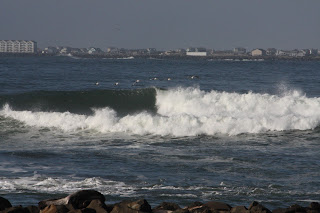 Incoming! Brown Pelicans effortlessly ride the winds along the tops of the wave on their massive wings. 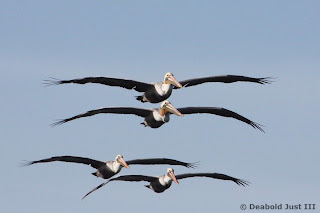 Notice the pouch on the bird second from the top. Baggage?
" His bill will hold more than his belican" 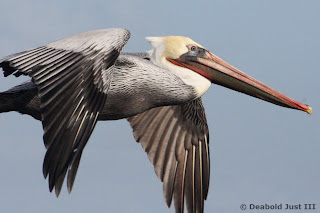 An observation deck in Westport, Washington was a perfect location. With bright sunlight to my back and strings of Brown Pelicans streaming by at or just above eye level how could you not get a great picture? 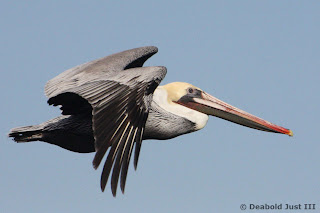 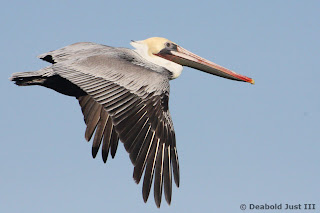 We had a very nice day.
There are more Pelicans today then when I first heard Mr. Merritt's poem.

The effects the pesticide DDT in the 1960's and 70's took a heavy toll on all birds near the top of their respective food chains.   Pelican populations suffered massive losses during theses times prompting protection under a variety of state and federal laws.  DDT interfered with the proper formation of egg shells causing the loss of countless birds.   DDT has been banned for decades in the United States and all most all of the affected species are recovering.
With the environment on the mend and state and federal protections in place these ancient birds should be around for us to enjoy for a long time.
Now, if we can keep them from being soaked in crude oil they should do just fine.
Posted by birdmandea at 8:32 AM

Looks as if I'm behind enjoying your blog. Heading for the Cibola NWR for Thanksgiving and hoping see something other than roadrunners and quail.

Found this forum above. Its pretty cool, folks showing their latest finds.