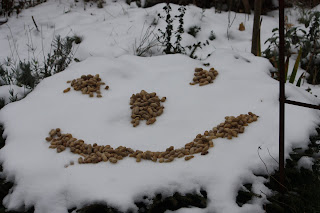 The weather took a turn and a cold front landed on top of us for a few days. Heavy snow and high winds made it difficult for all of the little birds to find food.  The first clear day afterward was cold and calm. I came across a small group of birds in a parking lot at the local mall.
Their focus on finding food outweighed their interest in me taking pictures of them. 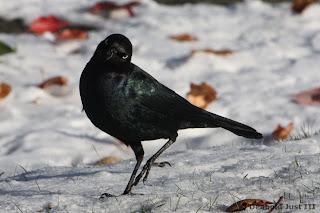 This is a Male Brewer's Blackbird
His kind evolved with the ebb and flow of the Great Plains of North America. With the reduction of the Bison they adopted cattle and human agricultural ways.  More recently most any urban parking lot will harbor a group of Brewer's blackbirds.
Potato chip crumbs and cigarette butts in a Safeway parking lot seam a world apart and somewhat less romantic then roaming the open plains of a precolonial North American with Bison and Antelope herds that spread from horizon to horizon. 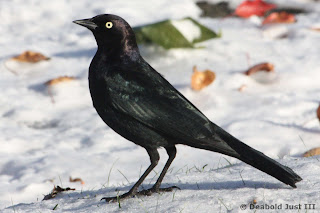 Our striking Male specimen here was causally strolling near this patch of undisturbed snow covered grass. 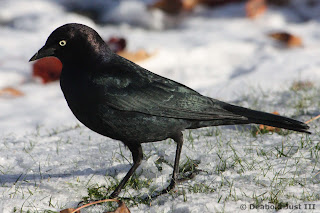 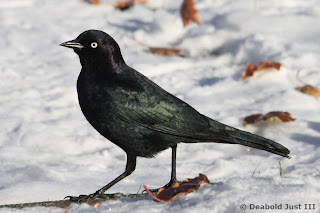 He was also hoping that they would leave the two male Brewer's Blackbirds with them behind for he is a better provider and obviously of superior breeding stock.   You do not have to look hard, you can see it his walk as well as being written on his forehead. 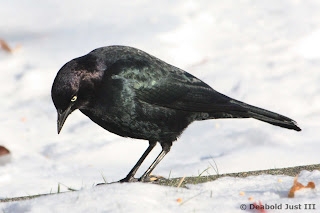 The small group of Brewer's Blackbirds started to move closer to the first male when they intersected with a group of European Starlings. These two birds species are literally from different worlds. 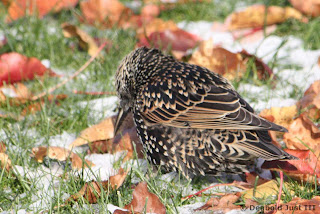 The Starlings were introduced to North America in the 1890's. They were transplanted from Europe. At the time I am sure someone had a good reason to do it. Since then the Starlings expanded Westward until they reached the West Coast in the 1950'S.  In sixty years less then a hundred Starlings fanned out to cover the entire United States of America's lower forty eight states.
Along the way the Starling has become vilified for competing with native bird species for food and nesting locations.  They are also viewed as a destructive agricultural pest causing higher food costs for us humans. The bottom line is we screwed up the system and bare sole responsibility for the loss of so many species. Blaming the Starling is not fair, they are just doing what Starlings do.  We get pissed off just because they are so good at it. 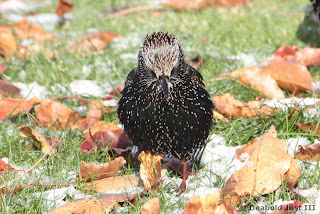 This is the Starling "Winter coat".  Fair wear and tear on the Starlings feathers over the Winter gradually wears the light colored feather tips off.  They revile the dark metallic color of the mating colors in the Spring. 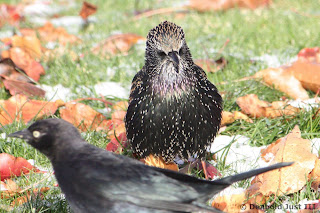 Starlings are aggressive and demanding. Starlings often travel in groups that easily over power other groups of birds that have already found a found source. This does not endear them to many bird enthusiasts. 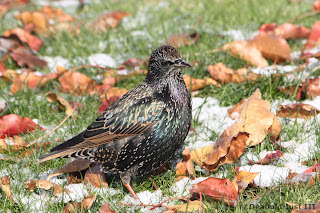 This handsome bird is a great example of feather coloration that can be found in many birds. The feathers do not really have a color of their own. They refract light with tiny structures in their feathers the act as prisms constantly changing the light reflected off of them. 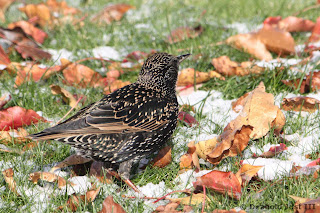 These two pictures were taken an instant apart and you can see the difference.


Portraits of the European Starling 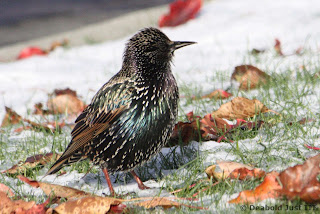 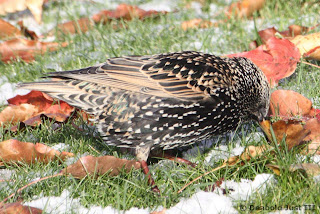 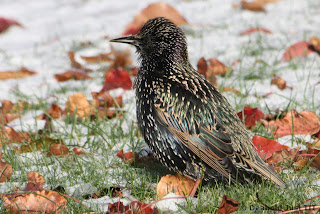 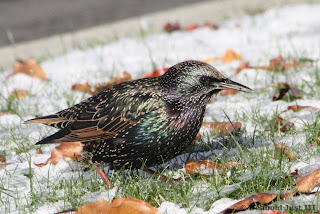 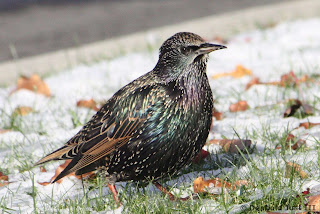 I could not tell you if this is a male of female Starling.
They all look alike to me.
The groups intermingled. 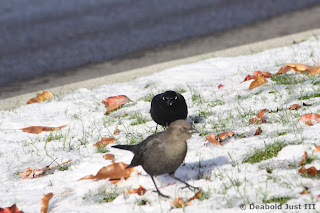 Even though he acted as if he wanted this female to come closer to see what he had found, he turned on her and drove her off. 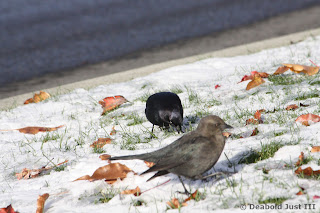 With his focus returning to his precious, he lowered his guard for a moment. 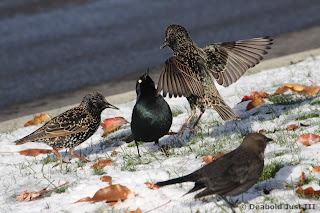 A moment is all it took for the Starlings to seize their chance. The differences in how the feathers of each species catch and reflect the light. 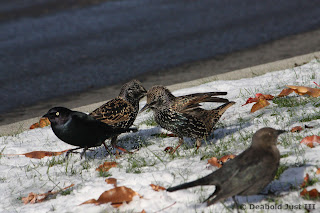 Out numbered and caught off guard there is nothing in that little hole worth fighting for.
A tactical retrograde and... 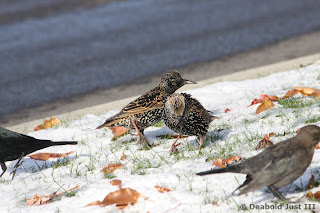 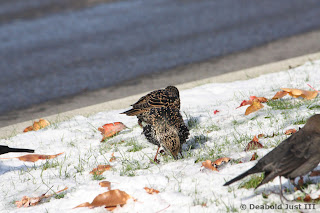 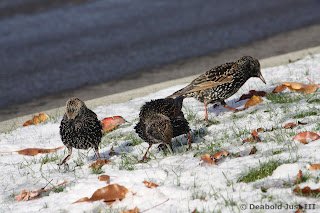 In the end there was nothing there. Was our sly Male smooth talking the Lady Blackbird?

The cold snap and the fleeting moments of brilliant sunshine gave me a chance to photograph these often overlooked birds up close and in detail.   As much as the whole snow thing was a major inconvenience for me it was a life challenging episode for them.  The snow melted the next day as the temperatures rose to the high 30's.  With the lower pressure and warmer temps come the clouds and the gray overcast skies of our typical winters.  These wet and warmer nights allow the birds to conserve their energy.  Every calorie saved is one that goes to surviving the Winter.  They say it is going to be cold and snowy this year.
I feel selfish for hoping for more sunny days.
Posted by birdmandea at 6:28 PM

do not feel selfish I agree!!!! we need more warm sunny days

this is just beautiful I never realized we are so racist over starlings and it is NOT like they asked for this???

http://www.lynnehammonds.blogspot.com/
Check out this duck for me and tell me what it is. Tks