In the early pioneer days of Washington, two men came to this area and each decided that this would be a great location to build a town and a port on the South Puget Sound. Both overlooked that other locations nearby were better suited. I think that their ambitions and greed may have clouded their judgment.  Never the less they each started to build towns side by side without any safe port or harbor. Each had very different ideas of the how to layout a their towns and as time passed and the edges of the two towns met. Of course when you have strong wills and egos there are bound to be small issues. The streets were at different angles and did not lineup.  Eventually the towns combined and a road was cut through the easement where the two met and was creatively named Union Avenue.
Union Avenue descends a long hill while bisecting town and terminates at the hot spot in my sleepy little town. Jam packed into just a couple of acres you will find the ferry terminal, ferry parking lanes, short term parking lots, a bus stop, a boat launch, a major railroad corridor, a small snack/liquor store and the State Prison boat and barge terminal.  All of this human activity as well as the trash cans and dumpsters are a gold mine for the local crows.   Like us the crows view anything of value as something worth fighting for. 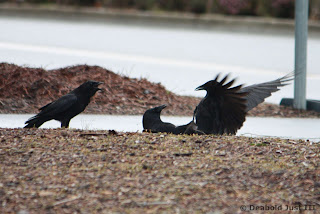 In April of last year I happen upon this violent interaction two blocks from the ferry terminal. It ended when a crow dove in from the upper left and impacted the crow on the right. As a woman walking her dog approached the crows cleared out. 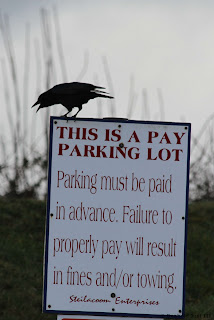 Last week I was passing by the same area when I heard crows sounding an alarm. I drive around with my windows down often to keep an ear to the world.  I approached them unseen due to the fight in progress. 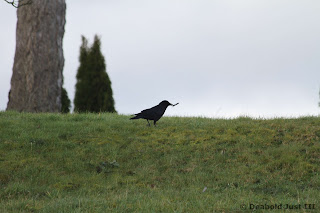 After the fight broke up one of the crows was holding a feather. 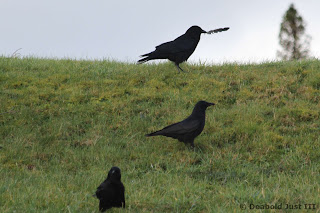 It was a prize from the fight. 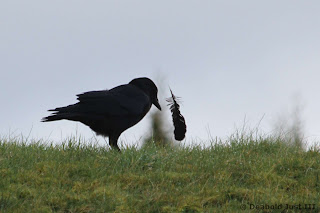 Though hard to see in the pictures there was a tiny bit of flesh and down feather on the base of the feather's shaft. The crow meticulously cleaned it from the quill.  It appeared as if the crow carefully consumed the tiny morsel of it's enemy.

Was this a symbolic act?
For the crow that lost the feather it may be more then just humiliating.  There is always the threat of infection,  avian pox or physical damage. During the early stages of feather growth the quill is engorged with blood,  if a feather is pulled or damaged during this vulnerable phase the crow could bleed out and die. 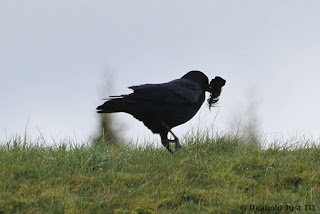 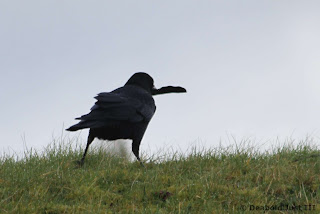 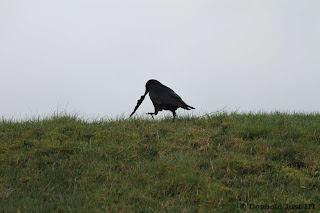 The noise of the two groups was deafening. The defeated crow and it's supporters shouted their rebuttals from the safety of a near by tree as the winners regrouped on the grass laughing at their defeated brethren. 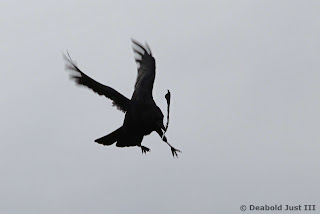 Once the feather was cleaned and thoroughly inspected the new owner the crow jumped high into the air and hovered for a moment then dropped the feather falling to the earth behind it. This exhibition was repeated two more times rallying the winning crow's group to cheer in a raucous chorus and gather around the prized feather. 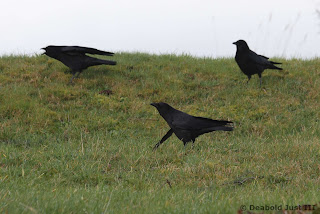 Hurling insults to add to the injury. 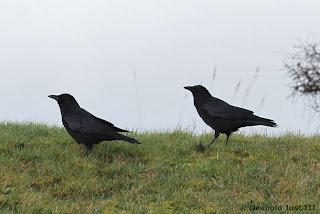 The exchange of taunts went on and on. It was very emotional for both sides and as it continued it took on  a very human appearance. Disturbingly human but then again the part of the brain being used by the crows at this point is the same part we use in similar circumstances.  The "lizard part". 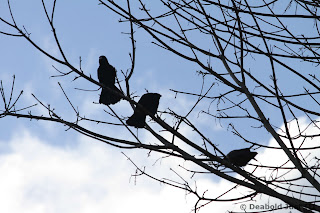 The loosing team.  The best I can determine there was a total of fifteen to eighteen crow involved. The winning side had a two or three bird advantage.  More then enough to tip the balance of power. 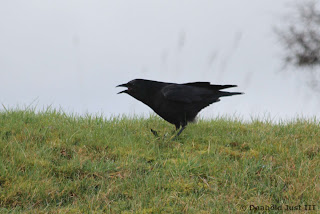 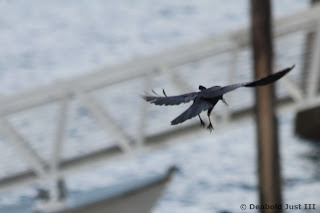 To the victor go the spoils.  Now for the victory lap around the ferry dock parking lot for all to see.  I wondered how long this crow would keep the feather as it flew over the railroad tracks. My thoughts of following the pair ended when the crossing signal blared out it's warring of an oncoming train.
We all can agree that crows and their cousins are very intelligent and social creatures. When we think of the social aspect we tend to think of the nurturing of the young, cooperative feeding and strong individual bonds.  The positive and good things of society. These things we value as part of our social values.  Crows somehow make it is easy to draw conclusions and parallels to ourselves, until things turn dark.  Then they look more like us then we realize or want to admit to.
I will keep an I eye on the ferry dock "gangs".  I will try to determine how often these turf battles take place and how far do they go.
Posted by birdmandea at 8:17 PM

WOW! I'm glad my crows don't fight like that. The knowledge that a winning crow flaunts the loser's feather is mind boggling!
So very human indeed!!

I am stunned ..ever stunned at the amazing crows around us ...they are such a wonderful symbol of Ian's life and I love that you found and made this post ..such attitude they have!
thanks so much for posting this
Jody is right they are "so very human indeed"

I am ever amazed with these moments you capture
I love you much birdbrain!
OOOXXX

Wow, you are so lucky to have seen and documented this--thank you for sharing! What you describe has a fable-like/children's storybook quality.
Clare