It is not the vernacular of the local peasantry but here in the Northwest it is part of our history. During the eighties it was a popular bumper sticker as part of an advertising blitz by a local and  iconic beer company. Though is was probably their most successful advertising campaign they went out of business shortly afterward.  So what was “seen”?  The Artesians.  Supposedly the “Artesians" were leprechaun or gnome like creatures that lived in the Northwest that were responsible for the high quality water and the beer it produced.
Of course there are no Artesians now or then but this does bring me a smile when I go to the field and see the things I see. Rather the things I see and cannot explain.  After all I live in Bigfoot country I should try to pay a little more attention.  So what about those who see things like the Loch Ness Monster, Sasquatch, Ogopogo, New Jersey devil or the Chupacabra?   I am leaving UFO’s out of this on purpose.

I am not going there.
Setting aside those who knowingly set out to deceive others for whatever their assorted motives may be, people do see things that they cannot explain.  It may due to poor lighting, short distorted mental pictures, fear, excitement, weak minds or an honest to God truth that they saw what they saw.  Regardless  they did see something that they feel does need to be validated. So what was it?  I don’t know but I have recently had two wildlife encounters that I photographed that made me stop for a few seconds and ask, what in the hell did I just see?
So here is how this is going to work. Below are  photographs for you to look at.  Try to scroll down on to them while looking away so just your peripheral vision can register them in the right spot for you to look directly at them.  Look at the picture for two seconds and close your eyes.  Do not look back. Think about what you saw and wonder how you would explain what you just saw.
Scenario One
You are standing in a coniferous forest clearing in the edge of a military base. Bright white fluffy clouds are drifting across a bright blue sky. With the sun to your left you look up and see a dark colored bird of in the distance flying just above the tree tops in a rectangular pattern. As you move closer the bird completes two of these race tracks.  You close to within one hundred yards and the target bird has not acknowledge your approach. Sun still to your left, bird's altitude 80-100 feet, no vocalizations, larger than the local crows but smaller then the Bald Eagles.
Scroll down for your two second encounter. 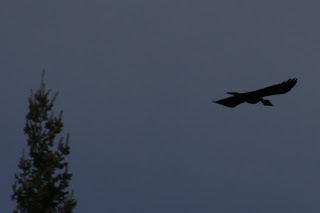 What do you have to say?

Scenario Two
You are standing on an embankment overlooking a tidal interchange zone with the tide going out.  It is below freezing with stiff wind to your face making your eyes water. The sun has just crested the ridge line behind you. Fast moving intermittent cloud cover varies the light and the water has a slight chop to it.  You are actively scanning the water at a distance watching for incoming duck that fly down the waterway at high speed. A near by mixed flock of ducks explode in to the air. You do a quick sky check looking for either a Peregrine Falcon or Bald Eagle diving in. No luck. The ducks that took to wing are in complete disarray and trying to regroup. Several ducks further away start babbling nervously. Look back to the water directly in front of you and see........one second this time....... 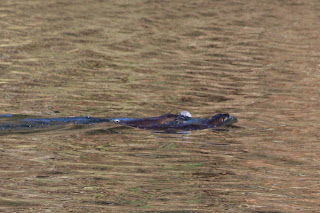 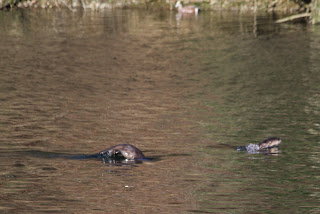 So by now you have really really looked at them. What-ca you got to say now? Who are you going to say it to?
There is a comment box below, share with me. No one will laugh at you...much.
In my next blog I will give you the answers. I would really like to see your comments.
I would like to know how you think.
If I had not had a camera in hand how would I be conveying these images to you and know you comprehend what I thought I saw?
Here is a parting bonus.

You have my personal guarantee that there are NO trans-dimensional beings in this photograph.  No tricks just a picture taken in the field then you get home up load them all to your computer and suddenly yo have this..... 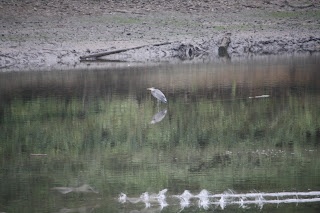 Tell me, what did you photograph?
Posted by birdmandea at 5:53 AM

This was fun...it's great to get shots like that and think whaaaat!
Glancing at #1...some kind of bird...looking more closely, looks like maybe a Heron.
#2 Whoaaa!! It really does look like an alligator...then in #3 I think the alligator became a couple of otters. Love it!
#4 Heron with another (or a duck?) coming in for a landing.
Well, how did I do? You are much braver than I...with the weather we have been having in western WA, I've been staying tucked up at home. Guess we shouldn't complain, tho, considering the weather in the east and midwest this winter.
Thanks for sharing your photos...always look forward to seeing what you have found.

Discovered this on Tweeters today.
My vote is for two otters based on the third photo but the other pics make this ID incredibly tough. I sure hope it's a native species and not something someone dropped off when it got too big or agressive. I'm really curious what it is!
Suzanne

Number 1 looks like a cormorant to me; and cormorants tend not to vocalize, so that's consistent with what you saw.