http://en.wikipedia.org/wiki/Piebald
Piebald is probably easier to remember and may be heard more often. In either case it can really make bird identification difficult at times when the bird you are looking at is not the right color!
I have encountered two leucistic birds in the past four months both in the same place.

At the waterway mentioned in previous blog entries several hundred crows congregate during low tide to feed, bath and socialize. Here in the Puget Sound area every low tide exposes thousands of square miles of fresh forage areas to exploit. Today was one of those days. Tide out, overcast, windy and in the mid-fifties. Large numbers were spread out all along fresh waters edge of the tidal mud flats protected from the winds out on the sound.

I was focusing on crows picking up small mollusk shells, flying straight up in the air and dropping them to the rocky areas below in an attempt to crack the shells so the juicy insides could be eaten. With each sortie the crow would drop from the sky nearly as fast as the helpless shell to ensure no other crow could steal their prize. Each reward would take several drops to accomplish a good cracking if at all.
As I was pondering on how to represent this behavior with a digital SLR camera I caught a flash of white on an incoming crow off to my left. I had seen this crow once before about two weeks ago just a short distance further up the drainage. It was during a driving rain that caught both of us without cover. The crow flew directly over head and I saw the white on the wings from below but did not have a chance to take a photo. The second encounter I got these photos.

Please excuse the low quality of these photos, time, lighting and speed did not permit better. There has been no color or contrast alterations. 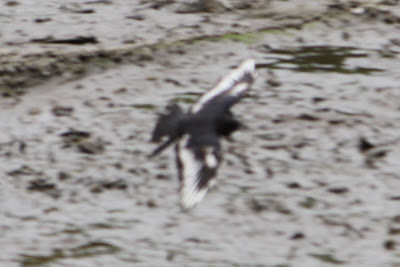 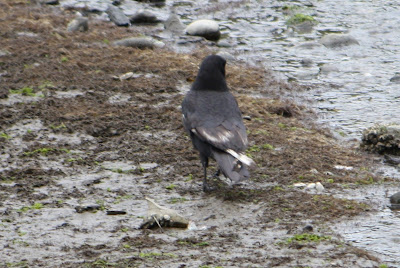 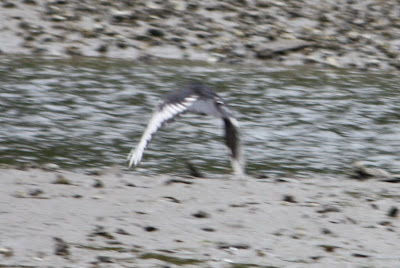 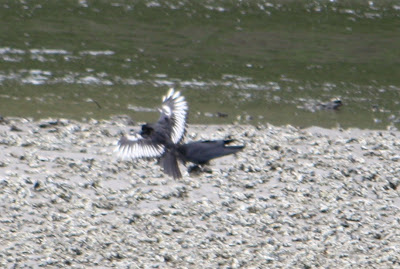 This crow came in from the south, landed and walked toward my location. Turning away I got a good view of the coloration on the back with the wings folded. A Bald Eagle screamed as it approached it’s nearby nest disturbing all of the crows on the flat. This flushed our bi-colored crow and it flew further way but exposed it’s back to the camera.
With hundreds of crows in the area my eyes are already straining to catch a glimpse of this minuscule patch of white. I will keep looking and post new photos if I can get them.

When I first saw the white on this hawk through the camera when I zoomed in, I had no clue as to what I was looking at. I thought it was a Gyrfalcon and could hardly contain myself. Then I saw the red on the tail and realized the shape was wrong I figured they were probably a pair of Red Tailed Hawks migrating north together.

She flew in slow circles near a pair of Bald Eagles that were building a nest but kept her altitude high making it difficult to get sharp photos.
The second sighting was fleeting, she was being pursued by a twenty to thirty Crows at low altitude and I have not seen her since.

I have maxed out the cropping of these photos to show as much detail as possible but I have not done anything with the brightness or contrast to keep the colors as true as possible. 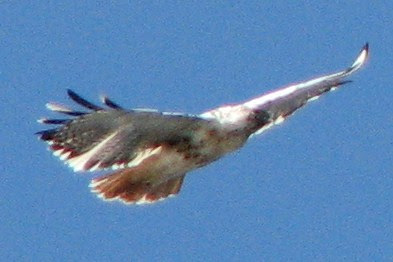 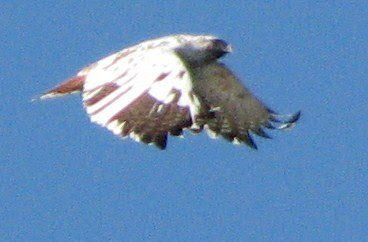 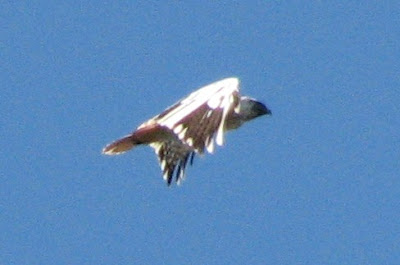 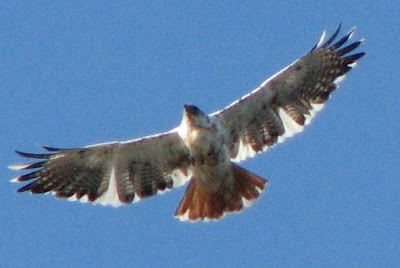 Again, I will keep looking, she is out there, maybe near you. If you see her, let me know.

Dea! I am delighted to see you have updated your blog. I am also jealous that you have so many wonderful creatures in your yard.
Jody